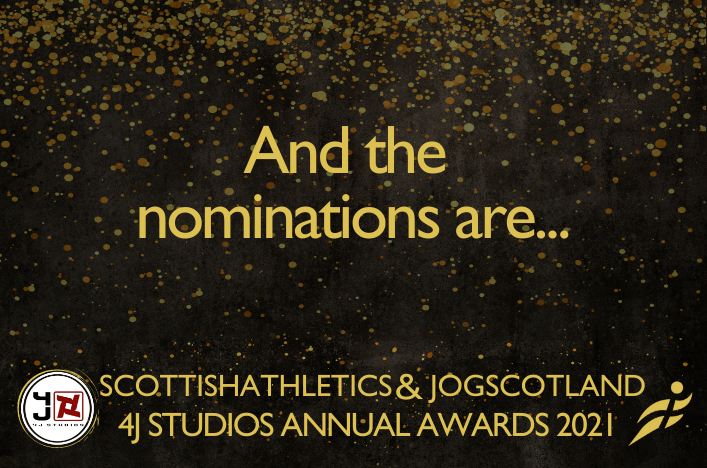 Four Olympians will contest the 4J Studios Scottish Athlete of the Year title at our 4J Annual Awards.

And three Paralympic medallists and a multiple World Record breaker have been short-listed for the 4J Studios Para Athlete of the Year.

It will make for an exciting finale to our eagerly-awaited 4J Annual Awards Dinner – which is taking place in Glasgow on Saturday 9 October.

We have already revealed the short-lists in a whole series of categories which recognise, celebrate and acknowledge recipients among our clubs, coaches, volunteers and Officials.

Now we can confirm the athlete short-lists and forward our congratulations to all those mentioned here as well as their coaches, families and the clubs who helped in their development.

4J Studios Athlete of the Year:

Five-time Olympian Jo Pavey is our Guest of Honour this year and Jo gave us her thoughts on the four Olympians short-listed for the 4J Studios Scottish Athlete of the Year title.

‘It’s absolutely phenomenal that Scotland can have such a strong list of contenders for Athlete of the Year,’ said Jo.

‘They have all done so well and are all putting Scotland on the map of global athletics. Well done to everyone who has worked hard behind the scenes to support them all, too.’

Jo gave us a few thoughts on each of the contenders:

‘Josh Kerr was so impressive winning a bronze medal in Tokyo in a fantastic personal best time of 3.29.05!

‘It was Team GB’s first men’s 1500m Olympic medal for 33 years so that puts it into context.

‘Josh also showed such immense mental strength to run a superb medal winning performance fighting back after a difficult first round.

‘Eilish McColgan is such a talented athlete. She ran a fantastic race in the Diamond League in Oslo to smash the British 5000m record that had been held by Paula Radcliffe for 17 years. She ran a totally amazing 14.28.55!

‘Eilish then backed this up by running another super fast time of 14:31.26. Eilish also ran a brilliant debut half marathon time of 67.48 when finishing second in the Great North run, her time puts her third on the British all time list.

‘And, of course, that 10k run in Manchester was really impressive as well.

‘Laura Muir won a brilliant silver medal in the 1500m in Japan.

‘She is amazingly talented and always so exciting to watch. It was absolutely fantastic to see Laura get an Olympic medal after all the hard work she has put in over the years and the massive determination she has shown.

‘Jemma Reekie ran fantastically to finish fourth in the 800m in Tokyo in a very tough race.

‘She has also recently claimed victory at the famous 5th Avenue Mile in New York. It is going to be extremely exciting to follow her career over the coming years.’