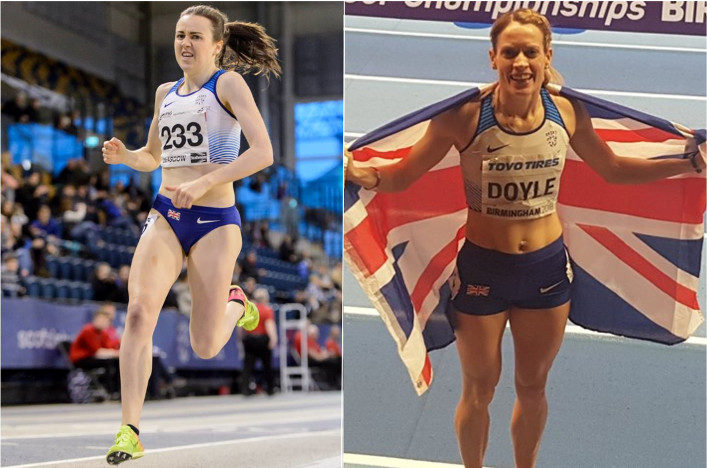 Scotland waited 25 years for an individual medal at the World Indoors – and then two former Kinross High School pupils delivered three in 48 hours!

Laura Muir added silver on Saturday night to her bronze in the 3000m on Thursday with a superb performances in a thrilling 1500m final.

That arrived barely half an hour after Eilidh Doyle had claimed third place for bronze and yet another big championship medal in the 400m final to give Laura one final shot of pre-race motivation and inspiration – with Zoey Clark close to a PB in sixth in her first major final.

It was an extraordinary night – with those three Scots contesting global finals after good performances earlier in the day from Jake Wightman and Chris O’Hare, who will contest the Men’s 1500m final, and Mhairi Hendry and Grant Plenderleith.

But let’s start with Muir.

Tenacity has always been her middle name and, after double gold at the European Indoors last year in Belgrade, the 24-year-old is displaying even more confidence and assurance in her running.

So it was to wreak ‘revenge’ on Sifan Hassan, who pipped her to silver in the 3000m, by surging beyond her on the final lap to chase home Ethiopia’s Genzebe Dibaba to finish in 4.06.23.

After 30 laps on this track over three days, Muir’s finishing strength really was something to behold and will delight her coach, Andy Young, who has worked so meticulously with her schedule for winter 2017-2108 with final year University commitments, of course.

It’s the first time in history that a Scottish athlete has won two medals at a World Indoors, (scottishathletics historian Arnold Black has confirmed). That says it all.

‘I didn’t know we had broken away,’ said Laura.

‘I was so focused on the race and the people in front of me that I wasn’t even focusing on those behind me. I used my strengths and made the moves in the right places. I knew I had to build it up but reacted when I had to.

‘I knew I had to try and get Hassan before the bend (on the penultimate lap) and I felt good so I went for it. I was very close to silver in the 3000m so I knew I just had to go for it this time.

‘I’ve finished 4th, 6th and 7th in world finals before so to win two medals this time around is amazing; it is about time!’

@lauramuiruns is such a determined, strong and amazingly talented athlete and I’m so happy for her. A silver and a bronze medal. Absolutely fantastic!!! 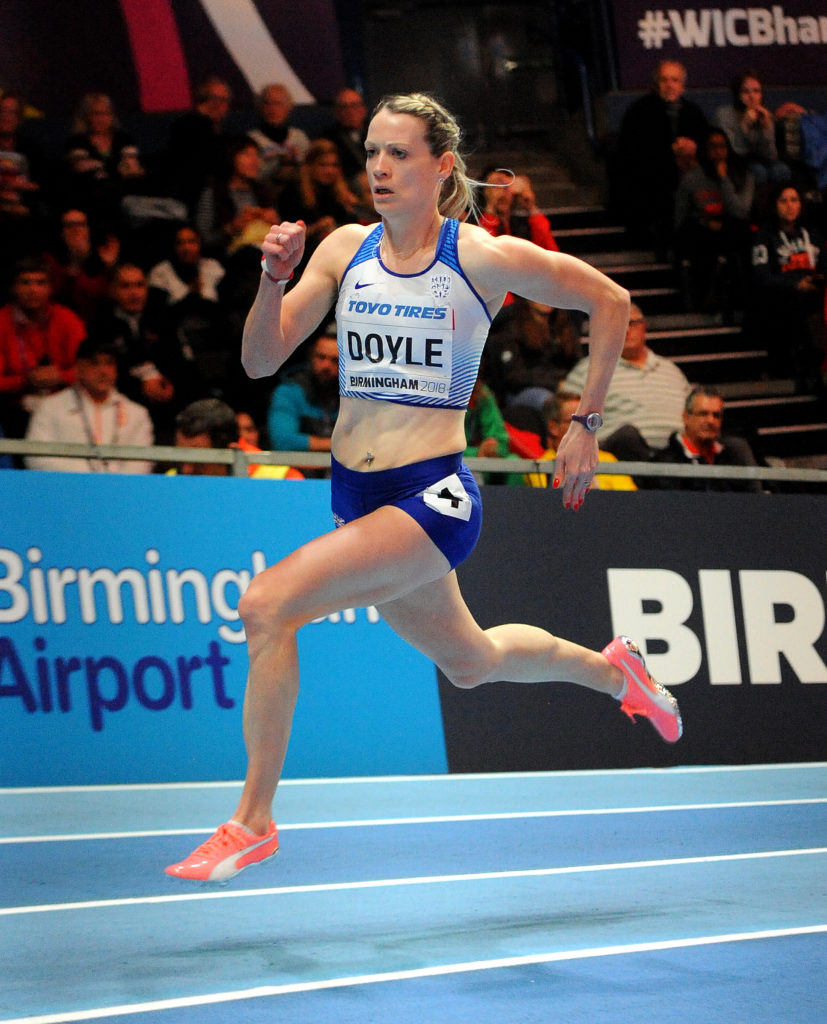 Once again on the big stage, Doyle delivered with a fine bronze medal in the Women’s 400m final with a run of 51.60 that is very close to her own National Record.

American Courtney Okolo took the gold in 50.55 and her countrywoman, Shakima Wimbley, just came through to over-haul Eilidh for the silver. Zoey Clark finished sixth with her 52.16 time also very close indeed to her PB.

Many congratulations to Eilidh, her family and coach/husband Brian on a terrific achievement in Birmingham. And well done, too, to Zoey on a first appearance in a global final with the guidance of coach, Eddie McKenna.

‘I’ve always won medals in the relays but to win one on my own in an individual 400m is very special and means a lot, ‘ said Eilidh.

‘It’s not my preferred event so to do this is incredible. This adds another accolade to my collection which is just amazing. It was a good race for me; I went out hard which was the plan and I’m so pleased with the end result.

‘I love the indoors – I think this has prepared me so well for the Commonwealth Games as well. I can go into that with so much confidence.

Zoey said: ‘I was delighted to be in the final but when you are there you always want to win a medal. I can’t be disappointed with how I ran, I mean it is my second fastest ever indoors; I gave it my best shot.’

Jake Wightman and Chris O’Hare both made it through to Sunday’s Men’s 1500m final – but in different circumstances.

Chris finished fifth in heat one as he once again suffered a foot problem before it transpired his run of 3.42.46 was enough to qualify.

Wightman, by contrast, knew a slow last heat would only offer two slots and he made sure by seizing control of the race to win well in 3.46.23.

‘I felt pretty strong out there, probably had to work a bit harder than I thought I would because there were still three of us there on the last lap and that’s because the pace wasn’t that quick,’ said Jake.

‘The only experience I’ve had of a home crowd was London [World Championships] last year and that was immense but this being indoors makes that noise even more amplified. When I hit the last lap in front they were roaring which is always going to help you keep your form down that home straight.’

Chris told British Athletics: ‘I thought it [injury which kept him out of the British Championships] was going to be OK. I’ve avoided the indoor track, and managed to do some good sessions on lane four and lane eight on the outdoor track in the hope it would hold up for seven and a half lap.’

Mhairi Hendry competed well in her 800m heat and ended up with a third place finish in a field of five – but her run of 2.02.65 wasn’t quite enough to make the final.

Nonetheless, it was a very solid Senior Championship debut by the VP-Glasgow athlete who was selected after silver at the British Champs and 2.01.30.

‘I think it is just a bit surreal to be lining up alongside such amazing athletes, especially to be competing in front of such a loud crowd in Birmingham, ‘ said Mhairi.

‘I think that spurred me on a bit. I can’t be happy with how I ran because this is my first major championships so I have to be pleased overall. To be racing against those girls and not be miles off them is really encouraging.’

Grant Plenderleith anchored the GB and NI 4 x 400m team to automatic qualification for the final on Sunday with second place behind the USA on Saturday lunch-time.

It was a typically strong performance by Grant and great to see the Falkirk Vics athlete make his bow on the international stage at the age of  26.

‘We managed to be in touching distance with the Americans so that is fantastic and we are all excited about a world final tomorrow,’ said Grant.

‘It is incredible to do that in front of the home crowd. We couldn’t ask for much more, well we could, a medal tomorrow would be incredible. That’s our next target.‘

With thanks to British Athletics for quotes from athletes