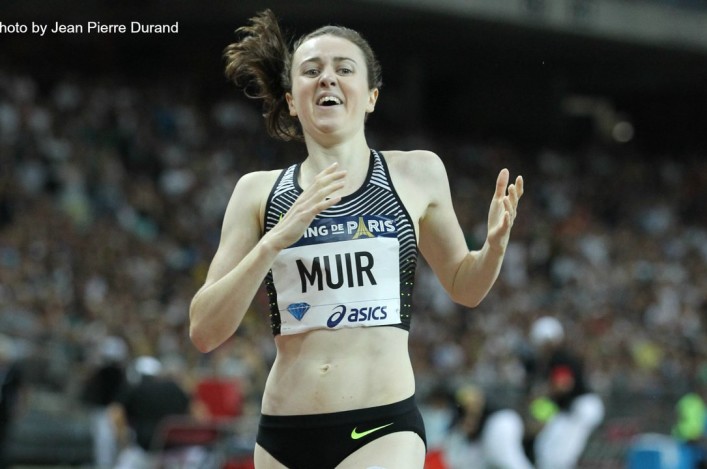 Laura Muir has re-written the Scottish and British Record books once again – with a remarkable Diamond League win in Paris.

The 23-year-old Olympian took another two seconds off her own recently-set British 1500m record, dominating the Diamond League race to clock 3:55.22 for victory.

Muir’s amazing run also broke the Paris meeting record and is a World Lead for the 1500m event for this year.

Ahead at the bell and with another gutsy run, Laura surged again to hold off Olympic champion Faith Kipyegon and world  indoor champion Sifan Hassan of Netherlands, who clocked 3:56.72  and 3:57.13 respectively, to storm to victory and move to 13th on the world all-time list.

‘The race was amazing,’ said Laura, who clocked a superb sub-60-second last lap and led six athletes to personal best performances only 10 days after the Olympic final in Rio where she finished seventh.

‘I couldn’t believe the time, especially since I didn’t do one track session since Rio. I just went with the pacemaker and I knew I had to dig in and hold on during the third lap. I’ll be in Zurich next week to finish my season.’ 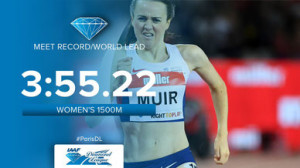 Muir had broken the British record for the first time at the London Diamond League meeting a couple of weeks before the Olympics when she clocked 3:57.49 to better the mark which had been set by Kelly Hol

Many congratulations to Laura, coach Andy Young, her family and all involved in her development over the years with Dundee Hawkhill and Glasogw University.

Laura now sits second in the Diamond Race for the 1500m event overall and Eilidh Doyle is leading in the Women’s 400m Hurdles.

Doyle took a second place in Switzerland last Thursday night with a run of 54.45. Lynsey Sharp was third in the 800m in that Lausanne event with 1.58.52 – and is in fourth place in the 800m Diamond race.