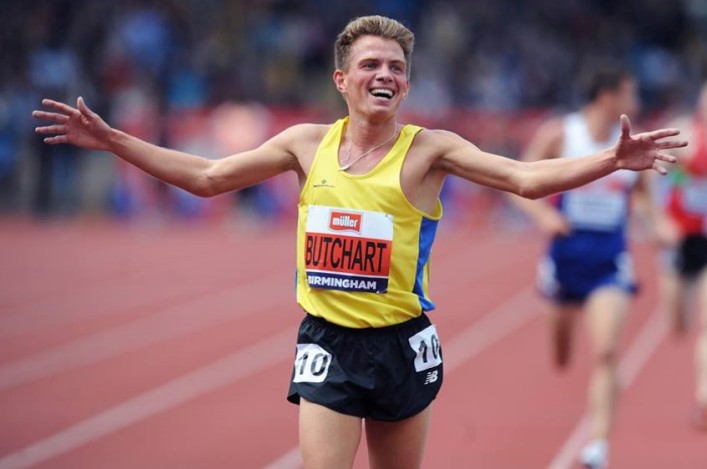 Andrew Butchart blew away the field to land an automatic selection place for the Olympics and revealed hard work and team spirit has helped him along the road to Rio.

The Central AC athlete became the fifth Scot to clinch a place on Team GB and NI for Brazil with a superb win in the 5000m in Birmingham.

Nick Percy had started what hopefully will become a medal rush as he took gold in the discus earlier in the afternoon at the Alexander Stadium.

On a day of drama, 17-year-old Ben Greenwood won his 800m heat with second-placed Guy Learmonth also through to Sunday’s final.

So, remarkably, six Scots will contest the 12-strong men’s 1500m final – with Lynsey Sharp a comfortable heat winner to reach the 800m final, as well.

Butchart, who won the National XC in Falkirk in February, is an inspiration to many – including the likes of Greenwood and Kerr – and insisted that dedicating himself to his sport has reaped a dividend after his win in a time of 13.44.00 from Tom Farrell and Andy Vernon.

‘I could never have forecast this for me three years ago when running for Scotland at the Celtic Games cross country,’ said Andrew.

‘I admitted back then I had been lazy but I have worked harder since then to make the most of my talent. That’s athletics for you. Whether you are 16 or 25, you can make progress and go up the levels if you are prepared to work hard in training and dedicate yourself to it.

‘I had to get it done today and I had the times in the bag. But I wanted that gold medal as well and I just seemed to get the jump on the others, mentally as much as anything, by breaking with four laps to go. I’m sure they could have matched me but they didn’t quite react and I was able to keep pushing on.

‘It was a wonderful feeling coming down the home straight and hearing that crowd – the best feeling I’ve had in the sport.

‘Now I will do my very best to compete in Rio and put in the kind of training that I have been doing over the past two or three months.’ 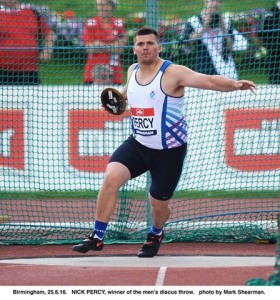 Percy won the discus title with 60.43m to complete a remarkable couple of weeks in June.

He set a Scottish record with 61.27m when winning the NCAA title and then added yet another age group title at the England Athletics u23s in Bedford the weekend prior to Birmingham.

‘It is unbelievable to be British Champion, I did not expect that coming into the competition,’ said Nick.

‘I’ve gone up against Brett Morse who is a former Olympian and Zane Duquemin who has won this title multiple times. It has been a crazy couple of weeks, it was so good to be crowned NCAA champion and then I won the England U23 Championships as well. To win the British Championship as well is pretty special.

‘Hopefully a big throw will come in the next couple of weeks. I’ve been over 60m four times, twice at competitions like this one so hopefully I can keep this momentum going and find a metre or two more.

‘And I really want to do the Scottish Champs and try for the Native Record there, which is at 57m. I will be at Grangemouth in August for sure.’

*Eilidh Doyle safely progressed to the 400m H final with a heat win in 56.40. And there was a fine 100m H PB for Heather Paton with 13.64 as she once again brought that down. It was not quite enough to get through the heats but did lift Paton to fifth on the Scottish all-time list for the event.

Rachel Hunter took fourth in the Women’s hammer with a season’s best throw of 61.37m – only a few weeks after she returned to action following shoulder surgery.