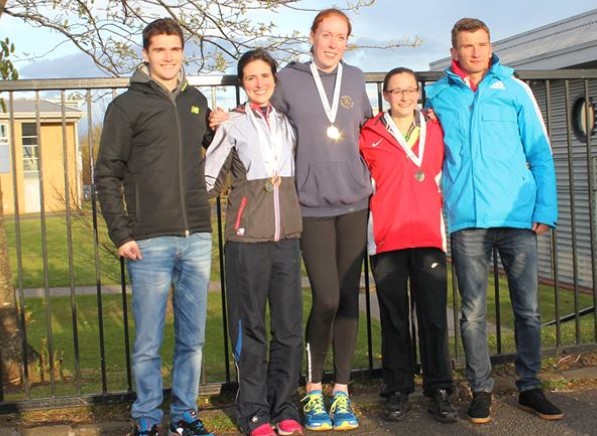 Prompted by Twitter, Jenn Wetton entered her first track race for two years – and claimed a Scottish 10,000m Championship gold and a GAA Miler Meet cash prize for a fine run at Crownpoint.

The Central AC athlete, returning to better form now after an injury-hit spell, shared the £200 time target bonus with Men’s winner, Will Mackay, as the Aberdeen AAC runner retained the title he won in 2015 across Glasgow at Hutchesons Grammar.

It was a night when the physical legacy of Glasgow 2014, via the Hampden surface now laid at Crownpoint, met the practical legacy of clubs working together via volunteers combined to produce a good meeting with 40 finishers for the 25-lap distance.

And making it that little bit more special for a raft of medallists, including a series of Masters, were the presentations by Rio-bound GB marathon squad Callum and Derek Hawkins of Kilbarchan AAC and Tsegai Tewelde from host club Shettleston Harriers.

‘It was only late last week I decided to race,’ revealed Wetton.

‘My coach, Derek Easton, mentioned it to me at training on the Thursday night  – but he knows  I am never too keen on track racing. Then on the Friday I saw a Tweet saying there were only three hours left to enter. So I did.

‘The pacemaker did really well for me but I didn’t actually realise he was dropping out with 10 to go. It was fair enough because he ran the London Marathon on Sunday and here he was trying to help me get a good time.

‘The 35.30 cash carrot is always an incentive and I had a pace-timing sheet taped to my wrist to know exactly what to go for at each stage. So, when I was on my own, I just kept checking with that to see if I was inside the target – into the last lap I knew I had almost 25 seconds in hand.

‘It’s good because my PB was 36.45 from three years ago and it was my first track race in a couple of years. I had all sorts of injury problems a year ago but I am getting there now.’ 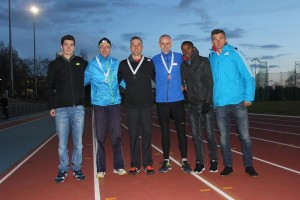 Some of the Masters medallists with Callum Hawkins, Tsegai Tewelde and Derek Hawkins

Mackay replicated his 2015 success with a strong run to come home in 30.36.89 and beat the 31.00 target. Stuart Gibson was a bronze medallist 12 months ago but the Ronhill Cambuslang Harrier took silver this time with 30.45.44 as Shettleston’s Mike Deason followed him in at third in 30.52.77.

Englishman Mackay, now very much part of the Aberdeen AAC scene, has been recovering from an Achilles injury which forced him to ditch plans for the London Marathon.

‘I had a shocking run at Livingston in the club relays at the height of the problem but the 10K at Run Balmoral was probably worth a 31 minute run given the hill there and this wasn’t too bad at all,’ said Will.

‘In fact I think it was a big windier than last year so I will take that 30.36 and actually I am pretty happy with it. I like this event and it was good to win the title for the second time.

‘I work in the oil industry and it is pretty volatile at the moment so I don’t  know how long I will be in Scotland. I will just keep enjoying things here while I can.’

It wouldn’t be meeting featuring Masters without a gold for Kerry-Liam Wilson, would it? The Ronhill Cambuslang man delivered again, this time with a PB for the distance of 31.33.38 for V45 gold and 7th place overall.

Among the other Masters golds were these performances:

Many thanks to the Glasgow Athletics Association for their support on this event and all the volunteers who helped out. And a special thanks to the pace-makers involved for doing their job to such an effect that there were 80 percent PBs on the night! 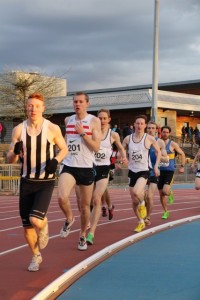 *There are two more GAA Miler Meets on Friday nights later in the summer season and both of these are at Crownpoint.

And, remember, the surface from Hampden and Lesser Hampden at the Commonwealth Games in 2014 has been laid at Crownpoint and Grangemouth so these GAA Miler Meet events give you the chance to race on the same track as top athletes did at Glasgow 2014!