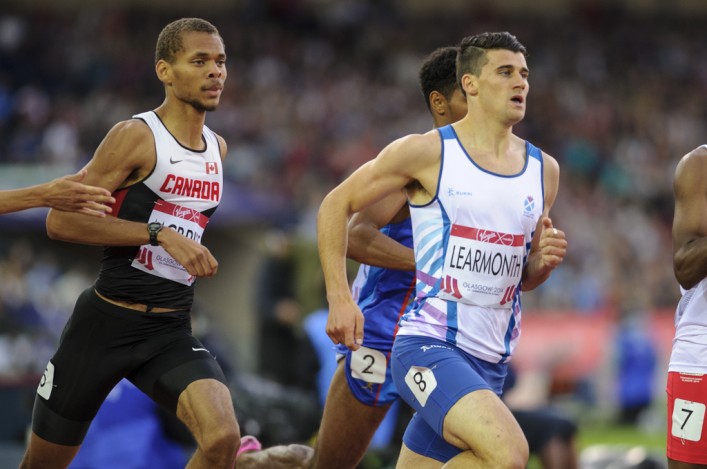 Guy Learmonth and Kirsten McAslan have booked their places for the European Indoor Championships with team GB and NI.

The two Scots, who both claimed British championship gold in Sheffield last weekend, delivered the qualifying times required at 800m and 400m respectively at the Sainsbury’s Indoor Grand Prix.

Learmonth and McAslan did so in fine style, both setting PBs and Kirsten’s 52.28 run took her second only to Eilidh Child on the Scottish indoor all-time list.

It was all part of a marvellous meeting in Birmingham – with the Sainsbury’s Indoor Grand Prix headed for Glasgow next year and due back in 2018 and 2020 in what should be great occasions at the Emirates Arena.

Laura Muir is already assured of her place for Prague and confirmed she plans to race in the 3000m after an 8.54 performance in Birmingham.

There was another 2.26m clearance for Allan Smith with David Smith matching that height to achieve a PB but he missed out on the 2.29m qualifying  height for the Euros.

‘The first goal was to get the qualifying time and earn selection for my first GB and NI senior team, so that’s a big tick for me,’ said Learmonth, who has built emphatically on the progress he made at Glasgow 2014.

‘I’d have loved to have run a lot faster but it is still an indoor PB.

‘It was a bit of a scrappy race with 250m to go and I lost my balance a bit. I had a lot left in the tank but glad to get that time. I’ve got two weeks until Prague and the aim will be to reach the final there.

‘The crowd were amazing once again; the UK never fails to put on a great show. It was the same in Glasgow – they all get behind you which really spurs you on.’

McAslan went to the World Champs in Moscow as part of the 4 x 400m squad but didn’t receive a run. Now she is in the individual event in Prague.

Kirsten, who finished third behind Seren Bundy-Davies and Francena McCorory, said: ‘I’m so happy – after I won the trials in Sheffield last weekend, I really wanted to get the (European Champs) qualifying time as I missed it there.

‘I didn’t think I could do that time. In Prague, I’ll take every round as it comes and I think I’ll have to take each race as if it were the final. It will be a massive opportunity but I’ll have no expectations – it’s going to be a great place to make my GB debut as an individual.

‘It’s an exciting event to be in at the moment – we’re all so young and we’re all friends off the track. ‘

Chris said: ‘It wasn’t the best race, I didn’t feel great at the start, I had raced last week in New York and came back this week feeling a bit jet-lagged. I felt rotten right from the start, and I suppose it is just one of those days.

‘When running in a top class field like this, on a bad day you get found out. I hope I haven’t ruined my chances for European indoors, had it been another week between my last two races I feel I would have done better.’

Laura said: ‘I thought I would have been a bit tired – the schedule has been a bit busy recently so I’m really pleased with that result. I’m quite pleased with the time – I raced on Thursday in Stockholm so I just went for it today. The pace was fine for me and glad I gave it a good shot early on in the race.

‘The 3000m is going well for me so I’ll aim for that at the European Indoors. I’d love to medal there – a couple of weeks rest and hopefully I should be in top shape.’