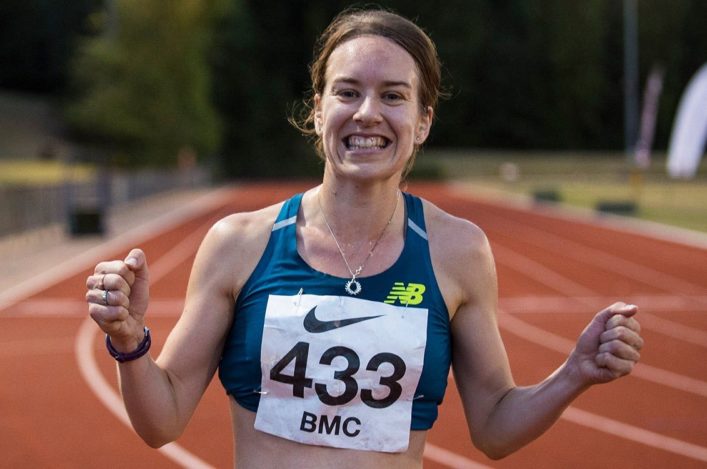 Steph Twell ran a superb 5000m of 15:16.65 to gain a London World Championships qualifying mark at the British Milers’ Club meeting in Watford on Saturday.

The early pace was outside schedule with the opening kilometre of 3:06.93 only 15:34 pace. The second was slightly quicker at 3:04 and Twell had to take over at 2000m. She really accelerated the third kilometre, covering it inside three minutes to reach 3000m back on schedule with 9:10.60.

At this stage she had a four-second lead on Charlotte Arter but this significantly widened as Twell reached 4km in 12:12. Running solo and with the wind picking up the Aldershot athlete slowed a little in the last kilometre but still had five seconds in hand at the finish.

Steph tweeted: ‘Delighted to run a @IAAFWorldChamps qualifying time! Semi-solo effort but not without the awesome help from Emily &AFD girls.’

It means Twell, and Eilish McColgan, who also has the time, need top two finishes at the World Trials this weekend in Birmingham to be sure of their places in London.

Laura Muir won’t race the British Champs this weekend as she recovers from a foot injury and, effectively, the automatic selection chances are now strengthened for Twell and McColgan.

In the Czech Republic, Callum Hawkins had to withdraw early in the Olomouc Half Marathon after suffering from heat exhaustion.

The third event in our Throws Grand Prix series for summer 2017 took place at Craigswood, Livingston, on Saturday.

And it was a good day for young Kilbarchan AAC athlete, Kirsty Costello, as she once again broke her existing Scottish U15 hammer record, subject to the usual ratification procedures.

Despite windy conditions at Livingston, Kirsty came up with 55.81m in her opening throw to go beyond her own 54.90 record – and she improved that to 55.92 with her next throw. Many congratulations to Kirsty, her family and coach Jim Green.

Once again many thanks to the scottishathletics Officials who were on duty at Craigswood on Saturday and all the athletes, parents, coaches and clubs who are supporting these events.

The final meeting of the four-event series is back at Livingston on Saturday 9 September. Enter online via our Events Section.

It was a tough but memorable assignment for six of Scotland’s best young hill runners at the weekend as they headed to the International Youth Cup on a spectacular course in Italy.

This is a terrific event for athletes aged 16 and 17 to gain international experience at an early stage while also learning about competing as a team.

Pitreavie AAC’s Zoe Nicholson certainly took that on board as she bravely raced on after breaking her wrist only 2K into the Girls event, which was over 3.7K, to finish 40th place.

Giffnock North’s Lynn McKenna was best-placed at 16th with Grace Whelan of Moray Road Runners in 24th place. Nicholson’s determination to finish helped Scotland to 10th in the team race.

Unfortunately, the Scotland Boys were unable to finish a team with George Rees of Fife AC a DNF. His club-mate, Robert Sparks, went on to finish 31st while Cody Stevenson of Garscube Harriers came home 44th.

We don’t have full details on what happened to George but all at scottishathletics hope both he and Zoe will recover quickly and well done to those who represented Scotland in the International Youth Cup.