Samantha Kinghorn claimed bronze at the third time of asking in the T53/54 1500m final at the Commonwealth Games.

It was a hard-fought race with the Scot home in 3:53.38 – just eight hundredths of a second away from the silver medal.

Nick Percy took fifth place in the Men’s discus final later in the same programme with a second round throw of 63.53m his best in a solid showing from the Scottish Record holder.

In that wheelchair track final, Australia went 1-2 via the performances of Madison Rozario and Angela Ballard.

It’s a fine moment for Samantha after finishing fifth and fourth in this event in Glasgow and then Gold Coast. Melanie Woods was just outside the medals in fourth place in 3:56.52.

‘It’s insane what I managing to achieve in my sport because I’ve worked for years to break 16 seconds this year for the 100m – and here I am with a 1500m medal at the Commonwealths!,’ said Samantha.

‘I was fifth in Glasgow and fourth in Australia four years ago so to get third now shows I am improving at this distance.’

‘It was brilliant to be out there competing and what an atmosphere there was in the stadium,’ said Melanie.

‘I can’t say if I could have done any more; maybe there were tactical moves I might have made. I was second at the bell but I was thinking then that I couldn’t see what was happening and how and when to react. Maybe that’s just experience.

‘But I loved representing Team Scotland and all my family and friends were in the stands. I bore them so often with my race chat so it was great this time to have them there – it wasn’t like that at the Paralympics last year.’

Nick was only just over a metre away from from the medals and will now prepare for the Europeans. He has also only just recovered from Covid.

‘Today was the first time I’ve woken up and felt better,’ he smiled.

‘I felt in the first couple of rounds I’d made a very good start and something might happen but it wasn’t to be. I’m only 1.05m away from the bronze so there is a frustration there.

‘But I wanted redemption after finishing 13th in Glasgow and fifth does that in many ways. I also wanted to come up with the longest throw by a Scot in a Commonwealth final and I’ve achieved that so that’s another box ticked.

‘I’ll head home in a day or two and start getting ready for Munich. The standards in discus are high at the minute be it Worlds, Commonwealths or Europeans and I am certain in previous Games that 63m something would have made the podium. But lots of guys are throwing well.’ 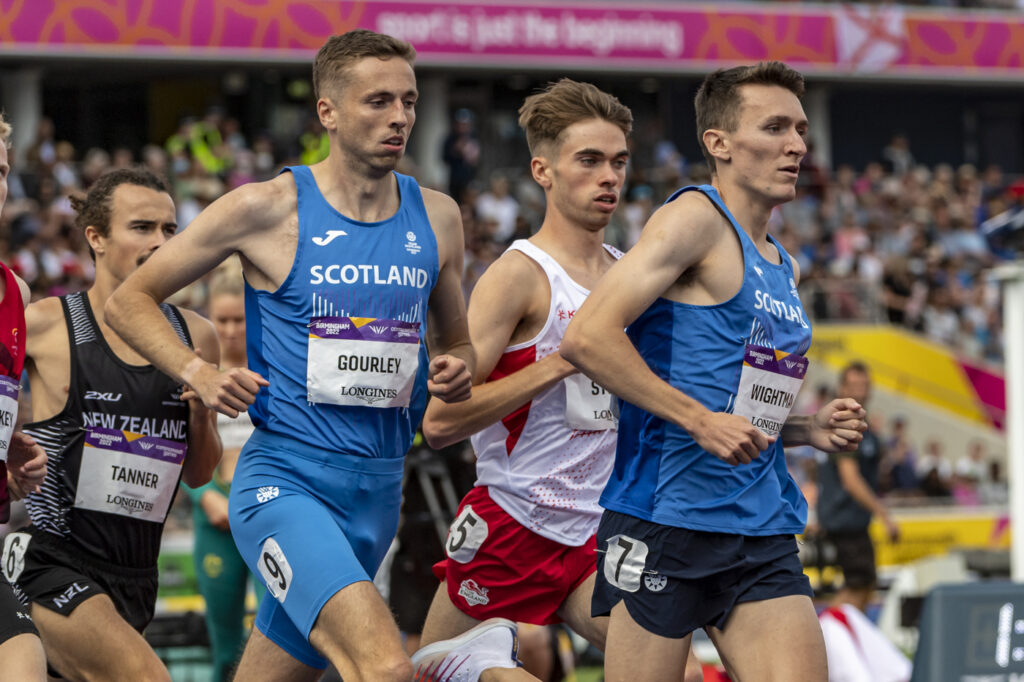 Not much more than 12 hours after Eilish McColgan ‘owned’ the Alexander Stadium, Scots were to the fore again in the Men’s 1500m heats.

Josh Kerr, Neil Gourley and Jake Wightman all safely progressed to Saturday’s final in what is sure to be a thrilling showdown.

It’s another great moment for Team Scotland and indeed athletics in Scotland, with the three men replicating their Doha 2019 achievement by reaching the final (when with GB and NI).

Josh was fourth in the first heat, with five to automatically progress. Jake then won the second race with Neil finding the right home straight finish to take fourth in a slower race.

‘It’s brilliant for Team Scotland to have three men in another final,’ smiled Neil, a semi-finalist in the World Champs immediately after testing positive for Covid.

‘If you had said ten years ago that might happen then I don’t think anyone would have believed you. If you had said it a year ago then I think we’d have thought it was entirely possible and likely.

‘I felt good and was glad to find a couple of gears on the home straight to run past a couple of people. That wasn’t quite the case in Oregon.’

The final is coming up on Saturday lunch-time with Australian, Kenyan and Welsh interest as well as the tartan trio.

Beth Dobbin clocked 23.10 to finish second in her 200m race as she made her Team Scotland bow at the Commonwealths in front of thrilled family and friends.

‘It means so much to have raced at this level for Scotland – because I first wore the vest ten years ago when I was 18,’ said Beth.

‘We bought tickets for Glasgow 2014 even though I was well off the standard of selection; then for Gold Coast 2018 I missed the time by one hundredth of a second.

‘I had 14 people here today with family and friends and I just wanted to make my dad (Jim) proud because he’s been with me every step of the way and Scotland means a lot to him.’