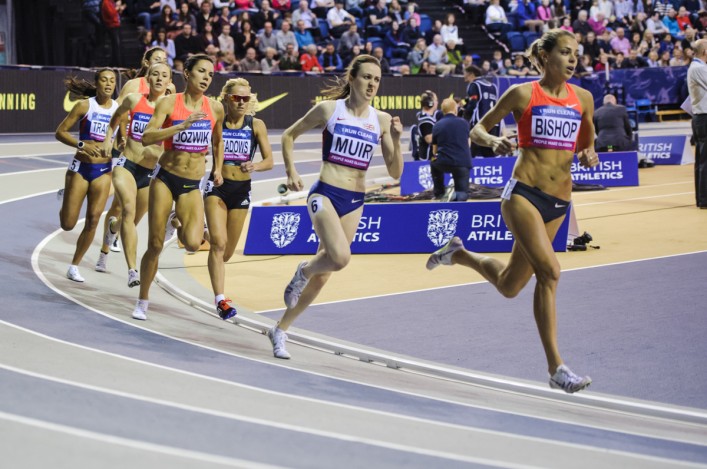 Laura Muir, Steph Twell and Andrew Butchart had the Emirates Arena rocking on Saturday afternoon as they set Native Records for indoors.

Four other Scots savoured their Glasgow Grand Prix experience on a day when Mo Farah returned to victory in Scotland after his second-place run at the Great Edinburgh XC in January.

Twell and Butchart brought down long-standing marks for 3000m indoors, with those Native Records set some 27 years ago at the Kelvin Hall by Liz McColgan and Alastair Currie.

The performances of 8.50.24 for Steph and 7.53.15 for Andrew also elevated them to fifth in the all-time Scottish lists indoors.

Muir, for her part, went close to snatching back the Scottish National indoor 800m record claimed by Lynsey Sharp in Boston some eight days previously but had to settle for improving her own Native best.

And, while there were a couple of other performances which disappointed the likes of Guy Learmonth and Josephine Moultrie, hopefully the experience of competing at such a high level event in Scotland gave a few pointers for the future.

The sold out crowd, of course, roared on young Scottish athletes as well in the Junior Relays and there’s no doubt those medallists won’t forget Saturday in a hurry.

Nor will the likes of Maria Lyle, who was named Para Athlete of the Year and two other recipients of special awards – long-serving official Angus Cameron and cross country and road running administrator, Alex Jackson.

It really was good to see all three ‘enjoying the moment’ inside the Emirates Arena (we plan to reflect on those awards in a separate story).

Muir clocked 2.00.70 to set a new Native best in finishing second to World Champs medallist, Melissa Bishop, and a couple of weeks ago that would have been a new Scottish record for Laura (who ran 2.00.94 at the Emirates two years ago). Sharp set it at 2.00.30 in Boston.

‘I really enjoyed it, it was tough and fast but good to be in a competitive atmosphere once again,’ said Laura.

‘I love competing on home soil so I was glad I could run a good time out there today.  That’s my last race of the indoor season so I’ll have a big block of training now ahead of the summer.

‘I’ve exams, as well, and a period of altitude training but everything has to be about Rio and the Olympic so missing out on the World Indoors isn’t a huge regret or anything like that.’ 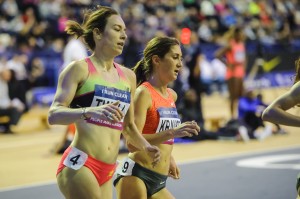 Twell, for her part, battled to fifth in a Women’s 3000m race paced by Edinburgh AC’s Maddie Murray for the first 1500m.

Kenyan athlete Nancy Chepkwemoi won it in 8.49.06 and Twell was just behind the bunched finish for 8.50.24 with no fewer than four athletes on 8.49. It was a tough day for Moultrie, however, as she finished in 9.19.

‘I had to really dig in and stick to the rhythm of the race and I was happy with the result,’ said Steph.

‘I didn’t really expect it (the qualifying time for the World Indoors) and was just going into it as a result of my training over the last few months. It is a really good sign that I am feeling so strong. I’ll be running in Sheffield next week and looking to tune a few things up.

‘The crowd were wonderful, I really felt a personal touch when they were cheering me on. I could feel the excitement building as the race went on and that massively helps you in the race situation.

‘Rio is definitely in my sights. I feel as though I have put the foundations in place but there a still a few miles still to do.’ 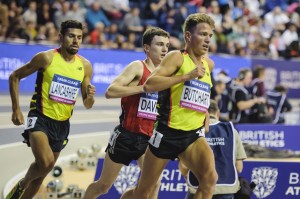 Butchart hauled himself to seventh place as Farah won the 3000m in 7.39.55  – with the Central AC athlete having gone into the race expecting the pace to be somewhat hot.

‘I knew this was going to go off hard and I didn’t think I could keep the pace but luckily a few Brits stuck in a group,’ smiled Butchart.

‘I didn’t work out exactly as I had hoped but the guys ran well. It was a good experience for me and I did need it.  You can’t beat this crowd, if only every race was like this! ‘

Guy Learmonth wasn’t too happy with his seventh place in 1.47.80.

‘The crowd was amazing as always, I love competing here in Glasgow, the noise is unreal. There support really spurs me on but unfortunately I didn’t give them much to cheer about today but I’ll be back. 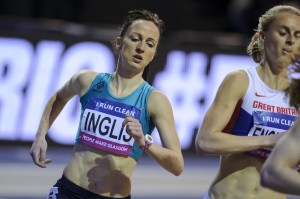