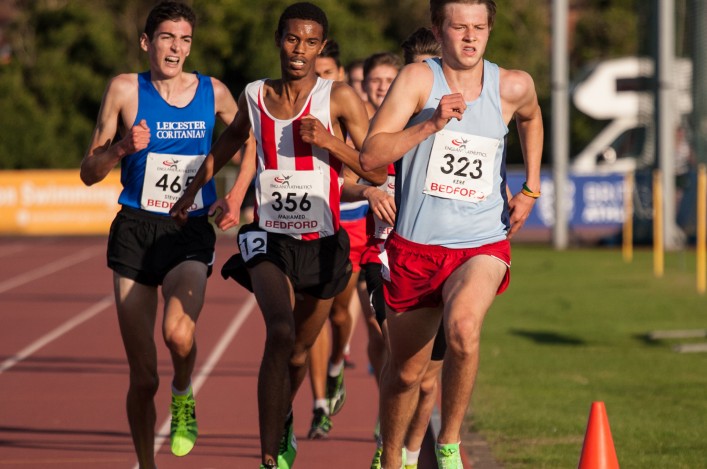 Josh Kerr set the bar high in his athletics achievements during 2014 – with a superb double at the England Athletics U17s as the track highlight.

Winning gold at 1500m and 3000m over the same weekend, as well as breaking a Scottish age group record, made him a compelling case for the scottishathletics ‘Athlete of the Year’ awards later in the year.

The Edinburgh teenager duly won the U17 title that night at Hampden so it ranks as pretty remarkable that, if anything, 2015 is starting to look even better.

Now at U20 level,  Josh has combined his last year at school with reaching the Euro U20 Champs with GB – with the event taking place over the coming days in Sweden.

A run of 3.44.12 in Manchester in May secured his place for Eskilstuna while still aged 17 and trimmed further a PB which started the outdoor season at 3.52.46 from that 1500m win at Bedford last year.

It ranks him highly for the Swedish event and, of course,  fellow Edinburgh AC member Jake Wightman is the current holder of the 1500m title following his win in Italy a couple of years ago.

Kerr will take nothing for granted and has a heat to negotiate, but his progress at GB level reflects well on the scottishathletics National Academy, as does the progression of his four Scottish team mates: Mhairi Hendry (800m), Kathryn Gillespie (1500m), Kelsey Stewart (4×400) and  Jack Lawrie are all bound for Eskilstuna – and all members of the Academy.

All at scottishathletics wish our athletes with the GB squad at the Euro U20s all the very best in competition.

Visit the event website for schedules, start lists and results.