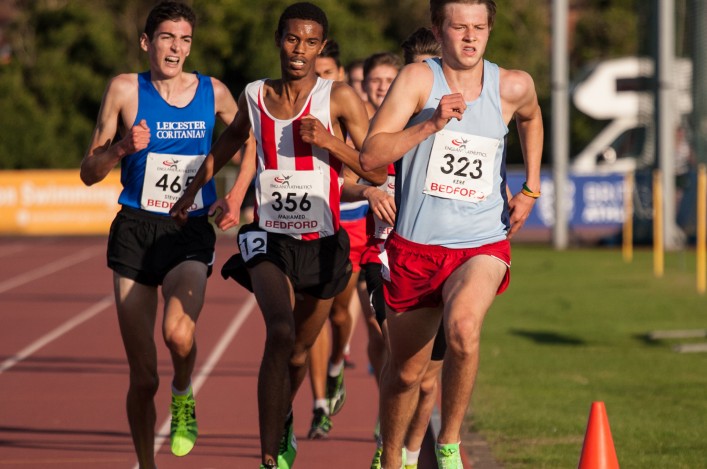 A memorable 2014 season in track in field is coming to a close but it was still a hectic weekend for athletes.

From Combined Events to Age Group Champs in England and league matches in Scotland as well as Para performances, results were coming in thick and fast through Saturday and Sunday.

So we will seek to cover some of those here in a round-up report but if a particularly impressive performance has been omitted – apologies.

Let’s start in Bedford at the England Athletics U15/U17 Champs with a number of Scottish teenagers having made the journey south to seek high level competition.

And Josh Kerr of Edinburgh AC came home with two golds after completing a remarkable double in the 1500m and the 3000m.

Josh won the 1500m on Saturday in 3.52.46 to set a Scottish Age Group record at U17 level and end the run of a mark set by Glen Stewart some 27 years ago. It also takes him top of the British U17 rankings.

How could the Edinburgh AC athlete follow that? Josh went out late on Sunday afternoon at Bedford and in the final event of the weekend clinched the 3000m title with an imopressive run of 8.35. 5.

He was not Scotland’s only endurance medallist – not by any means.

It was a good weekend for George Evans from Inverness Harriers as he won the U17 shot putt with 16.93 and took bronze in the discus with 52.35.

In the Para events at Bedford, there was a triple success for Jason MacLean in 100, 200 and long jump while his Inverness Harriers club-mate, Finlay Maclennan, picked up 400m gold.

All the results from Bedford from England Athletics U15/17 are now online.

*There were also some good Scottish performances at the Combined Events international fixture in Manchester over the weekend.

Congratulations to Andrew Murphy of Kilbarchan AAC on a fine third place finish in the Senior Men’s Decathlon as he amassed 6440.

In U20 Women heptathlon, Emma Canning (Whitemoss) was 4th and Hollie Lister (Central AC) was 6th.

There were also good performances by Caitlin Edgar, who went 9th on the Scottish U17 list, and Holly MacArthur, who scored a second U15 all-time tally of 3280 – just better than Caitlin managed last year.

Well done to these athletes, their families and their coaches for their commitment to CE competition throughout the year.

Check out the various points tallies via the results.

*Congratulations to Central AC on yet another Scottish Men’s League title.

That’s five in a row now for the Central lads with Shettleston Harriers taking the second division championship following the final league fixture at Scotstoun on Saturday.

Victoria Park-Glasgow joined Shettleston in winning promotion to the first division with Arbroath and Lasswade taking the drop into the second division.

All the results should become available on the league website

*Meggan Dawson-Farrell was in action in Switzerland over the weekend in her last outing of a season which include an appearance at Hampden in the Commonwealth Games final.