Scots impress at Lillebaelt half marathon 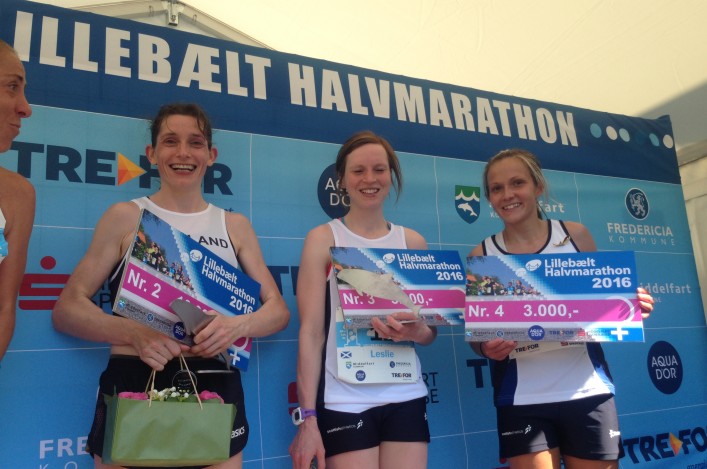 There were two winners at Saturday’s Lillebealt Half Marathon in Denmark – the Scotland teams who took five top four places and the searing heat which rendered PBs a distant fantasy.

Commonwealth Games marathon runner Hayley Haining made a welcome return to international competition with the women’s runner up spot in 78:48 while her two team mates were making their international debuts.

Lesley Pirie took third place in the women’s contest in 81:50 while Jenny Bannerman was fourth, recording 88:39 in her first half marathon.

This gave the Scottish women 18th, 34th and 72nd places overall in an event which attracted over 11,000 entrants.

At the front of the field, Andrew Douglas and 2010 marathon contender in Delhi, Martin Wiliams, were in an early leading group of four.

Douglas was still in second place with three miles to go but in the end had to settle for third in 69:02. Williams finished fourth in 71: 28 in a race which saw five Scots on the prize podium. 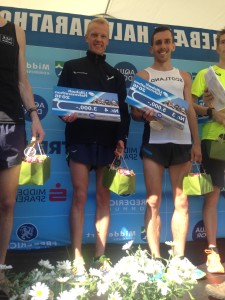 Martin Williams and Andy Douglas on the prize podium

However, the other story of the afternoon was the heat which turned out to be even worse than forecast and dominated the athletes’ post race thoughts.

‘I knew it was going to be tough the moment I crossed the starting line and I felt quite dried out even by 1K,’ said Haining.

‘There was also a wind although that actually helped to cool us down in places but the heat was really intense in sheltered areas. But, in the absence of a decent time, I’m happy enough to have got second place and I’ll keep plugging away.’

Douglas, whose next race is the GB trials in the Lake District for the European Mountain Running Championships, was also content with his placing in the conditions.

‘I’m pleased with the third place although it wasn’t the time I was looking for by any means,’ said Andy, who has had such an impressive 2016 already in road and cross country.

‘The conditions made it very tough and the wind and heat were a lethal combination. But it’s a great race. This is the third time I’ve been here and I’d happily come back to do it again.’

The Lillebealt Half Marathon is the second biggest road race in Denmark and, with the help of an army of volunteers, is organised by the local club which has just 65 members.