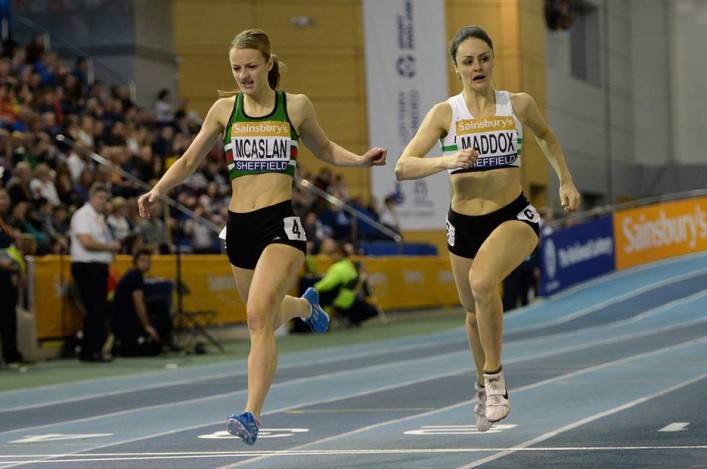 The Sainsbury’s Grand Prix is heading to Glasgow three times in the next five years – and now the 2015 event will feature some top Scots.

Following the eight-medal haul at the British Indoor Champs, there could be up to seven Scots featuring in Birmingham this weekend in a high-quality meeting.

And the races on offer should hand the likes of Guy Learmonth and Kirsten McAslan the perfect opportunity to chase European Indoor qualifying standards.

McAslan was just shy of the 53.00 required for the individual 400m for Prague when she won the British title in Sheffield. Now the 21-year-old Scot will be pitched in against Olympic champion Francena McCorory in Birmingham.

Mo Farah’s appearance over the two-mile distance will undoubtedly capture the headlines but there are opportunities for Scots in the person of Learmonth, Chris O’Hare, Sarah Warnock, Allan Smith, David Smith and Laura Muir.

Muir will race over 3000m on this occasion after two PBs indoors at the distance already in 2015 and the Dundee Hawkhill Harriers athlete has the times for both the 1500m and the longer distance for Prague.

O’Hare returns from America for his first indoor race of the season in Europe – with a place in the GB and NI team very much on his mind, too.

Sheffield gold medallist Learmonth needs 1.48.00 to be sure of selection after winning the trial and will go head-to-head with British rival, Andrew Osagie.

British high jump champion Allan Smith looks certain to be named next week for the Euros but it is not clear yet if David Smith will compete this weekend after being injured in the warm-up at Sheffield.

Check out all the start lists for Birmingham