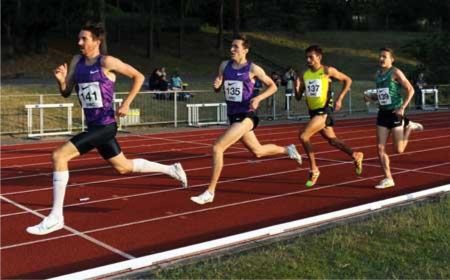 Jake Wightman in action at Watford – photo by Mark Shearman

Commonwealth Games duo Steph Twell and Lennie Waite warmed up for the British Champs at Birmingham this weekend with 1500m runs at Watford on Saturday night.

The busy BMC meeting featured a number of well-known Scottish athletes and there were PBs and season’s bests including a fine run by Jake Wightman.

Twell is looking to clinch the 5000m qualifying standard of 15.20 for the second time at the Alexander Stadium and she finished fifth in the 1500m with 4.12.14.

Waite recorded a PB in that same race with 4.15.33 and Jenny Tan of Fife AC was in a similar situation – shaving a fraction off her PB to now reach 4.20.06. Steeplechase World Champs hopeful Lennie’s previous best in the 1500m had been set back in 2009

Delhi Commonwealth Games athlete Alastair Hay had a good run in the A 5000m race and took more than 10 seconds off his PB with a time of 4.12.74.

Inverclyde AC’s Jonny Glen was the best-placed Scot in the B race as he clocked 14.30.20 for another PB. Glen has unfortunately missed out on the Euro U20s standard at 10,000m and 5000m – going close at Highgate in the 10,000m – but the GB cross country international’s PBs have improved each time he has raced.

His Inverclyde club-mate, Craig Ruddy, had a season’s best 14.34.60 in the race with Ronhill Cambuslang’s Stuart Gibson recording a PB of 14.44.54.

In the 800m races, the performance of note came from Ben Greenwood as the teenager ran a World Youths qualifying standard. Ben was at 1.50.50 to go close to his PB. 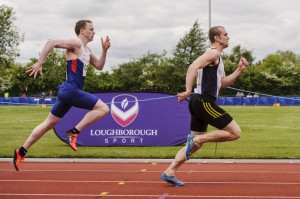 Jack Lawrie in action at Loughborough with David Martin

Jack Lawrie was in action with the GB team at a Junior International meet in Mannheim – and is now set for the Euro U20s in Sweden.

The Pitreavie AAC 400m hurdler went to Germany seeking the qualifying standard of 51.80 after winning gold at the England Athletics U20 Champs with 51.84.

And Jack achieved precisely that with a PB performance of 51.77 to finish second in the race and secure his slot for Eskilstuna in July. It also improved Jack’s standing as second best all-time Scot at U20 for the event.

The GB selections for the Euro U20s will be confirmed on July 8 and Jack’s place is now assured alongside Josh Kerr with a couple of other Scots remaining hopeful of landing places on the British team.

All at scottishathletics congratulate Jack, his family, coach John MacDonald and those at Pitreavie AAC involved in his development over the years. 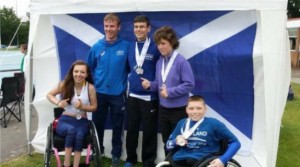 Scots were competing at Warwick

Samantha Kinghorn has been in action in America and once again the wheelchair racer came up with a Scottish best over 200m.

Sammi clocked 30.52 to bring down her own record for the distance at an international meeting in Indianopolis with coach Ian Mirfin.

Meanwhile, Scottish Para athletes were sweeping the boards at the English Championships in Warwick – with a combined medal haul of 16 golds and one silver medal from the likes of Lewis Clow, Shelby Watson, Ross Paterson, Kyle Brotherton and others.

Ross, in fact, claimed a hat-trick of golds in the T38 100, 200 and 400m races. Many congratulations to all the Scottish athletes who competed at Warwick.

Results are online from the  Typhoo National Junior Athletics Champs 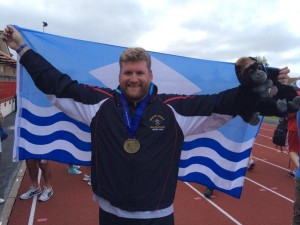 Andy Frost has featured in the Commonwealth Games on three occasions – competing for Scotland in Delhi and in Glasgow.

He was wearing the colours of the Isle of Wight, however, for the Island Games in Jersey over the weekend and defending a hammer title it seems he has held since 1999!

Frost duly delivered gold again for his eighth such success with a throw of 68.59m at the event in Jersey. There were half marathon team silver medals for Shetland pair Bobby Bristow and Leon Johnson.

Event results are now available for the Scottish Schools Inter-Area match, which was held at Grangemouth shortly before the end of session.

Forth Valley Schools won the Girls event and the boys event was won by Edinburgh Schools. Those results are online on our Events page