Our Officials Conference took place last weekend in Dunfermline and one of the highlights was the award of the Tom Stillie Sword to Janet Nixon.

The Australian official has made a huge contribution during her four-year stay in Scotland, which is now coming to an end.

The Tom Stillie Sword is presented each year to an individual who is deemed to have made a big impact on our sport and spans all manner of roles, with recent recipients including Libby Clegg’s guide runner Mikail Huggins and Ron Morrison of the Road Running and Cross Country Commission.

Janet has been very influential in IT for athletics in Scotland as in international Technical Official and indeed in the past couple of years steered through the ‘live results’ service which is now a feature of track and field events – where we lead the UK.

Olympian Laura Muir was another guest on Sunday at the Carnegie Centre as she explained anti-doping procedures from an athlete’s perspective – with that insight important to Officials. New scottishathletics CEO Mark Munro was also in attendance.

Here are some overall thoughts on the Conference from Official Brenda Stephen.

‘Janet Nixon was a very effective guest speaker. She took as through her ‘rise’ through the ranks to her present position as an International Technical Official.

‘She told us of her involvement in every Olympics since Sydney 2000 (with the exception of London 2012) and other major sporting events to many to mention. Her engaging talk highlighted her surprise to have achieved all she has simply by enjoying what she does.

‘Those of us who have worked with her know that she is also very good at what she does and has been an inspiration to many.

‘Her mantra was very much to give praise but always encourage improvement. She also gave the very good advice of referring to the rule book no matter your experience or expertise and enjoy all the Meetings you officiate at.

‘Janet returns to her native Australia this week and takes with her our thanks and good wishes and a token of our esteem via the Tom Stillie Sword.

‘The invited guests provided plenty to think about in an informative and entertaining manner. Laura Muir took time from a busy schedule to give an athlete’s view of the doping process.

‘During the Q and A session, Laura covered the role of officials acting as chaperones, a role which most of us had no personal experience of. She discussed the sometimes arduous procedures athletes have to go through, but stressed that she accepted this necessary responsibility.

‘On receiving a small token as thanks, she took the opportunity to thank officials for all their hard work.  Laura is a true professional and her contribution was warmly received by all.

‘’’To see oursels as ithers see us!’ was the theme of the last presentation which resulted in an interesting Q and A  session with invited guests – athlete Emma Canning; coach Norrie Hay; team manager Billy Glasgow; parent Nicola Moriarty; and Janet Nixon. Lead by George Sneddon, this proved a very interesting exchange.

‘Two sessions were devoted to Workshops and gave an opportunity for officials to work together in groups to get to grips with the many diverse aspects of officiating today. The workshops included Disability Athletics, Rule Changes, Report Writing and Dealing with unusual Scenarios.

‘It was an excellent day!’ 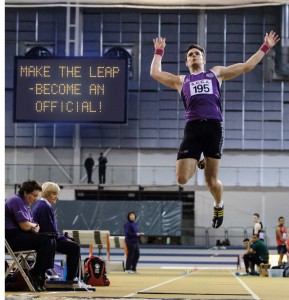