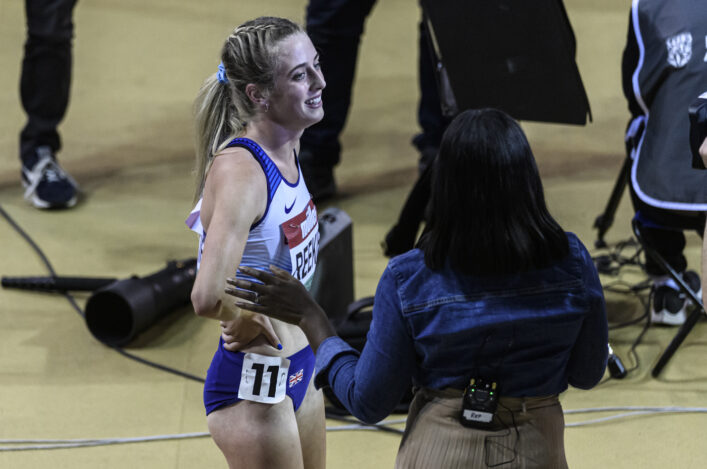 WATCH: ‘Years of hard work are paying off’

Reekie, 21, won the 1500m at the Grand Prix in Glasgow on Saturday, having recently broken three British indoor records inside a week, and she concluded what has been a remarkable indoor season in the IAAF World Series meet in France.

Fellow Scot Philippa Millage paced the race well as she reprised the role she had in Glasgow when Jemma broke the British Record held by Jenny Meadows.

Two more British marks fell the way of the Kilbarchan AAC athlete when finishing third at the Millrose Games in New York as she posted new records at 1500m and the mile.

Well done to Jemma on maintaining such an impressive sequence of performances and her family and coach Andy Young.

‘It was a tough field out there and I was going for the win,’ said Jemma.

‘I would have liked to have run a bit faster knowing what shape I’m in but I’ll take the win.  It was quite busy [11 runners in 6 lanes] and I’m getting used to 800 metre running.  My legs were struggling but I’m glad I made it to the line first.

‘I tend to forget about races I have done before when it’s time to move on to the next one.

‘That’s the end of the indoors for this year.  I will just look to do a heavy block of training now.

‘The World Indoors being cancelled is a disappointment but there’s a good reason why. So I will just get my head down and focus on qualifying for Tokyo.’

With thanks to Stuart Weir