Jake Wightman has been announced as captain for the GB and NI team at this weekend’s Euro Team Champs in Poland.

Jake will be making his first appearance at the Championships, competing in the 800m on Sunday.

He will lead the British team against six other nations at the Silesian Stadium: France, Germany, Italy, Poland, Portugal and Spain.

Jake aid of the leadership role, announced on the eve of the contest: ‘It’s an honour to be able to captain the British team this weekend. We’ve got a great mixture of both young talent and experienced athletes, so I hope that will be the perfect recipe for us to produce the best result possible as a team.’

It’s been a busy week for Scottish selections on the team – thrower Kirsty Law was called up yesterday after five Scots were named initially in the GB and NI selection – Beth Dobbin, Jake Wightman, Will Grimsey, Chris Bennett and Erin Wallace.

Kirsty’s week was already looking good last Sunday when she claimed yet another event win at the Loughborough International with a 58.59m throw. It was her third success in a row in this event. 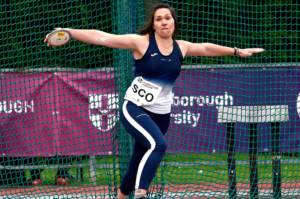 Pictured: Kirsty Law at Loughborough, with thanks to Mark Shearman