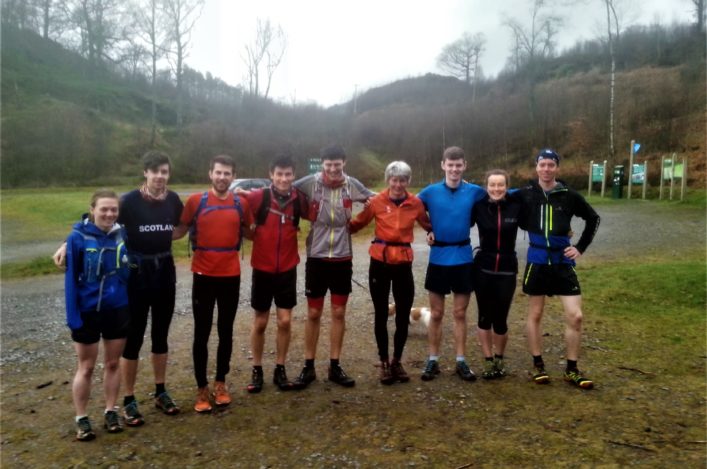 A selection of Scotland’s top hill runners, plus some of their coaches, met together for a pre-season training camp in Aberfoyle.

The camp, now an annual fixture, aims to bring together existing or aspiring international hill runners, at both junior and senior level, and is deliberately timed to take place a short time before the international season begins.

A residential event, the weekend consisted of a mix of running sessions and keynote presentations, but it also gave athletes and coaches plenty of opportunity for informal discussion and networking.

The formal running programme kicked off, literally, with a testing hill repetition session which saw the athletes zig-zag their way up through the woods above the village and finish on the top of Creag Dubh.

After lunch, the afternoon began with nutritionist Emma Kinrade’s presentation. Emma’s presentation focused on the key role of nutrition in any athlete’s quest to perform at the highest level and maximise their potential.

Then came Angela Mudge. Angela is as qualified as any athlete to talk at such a camp, given that she has followed her own illustrious hill-running career (which culminated when she became World Champion in 2000) by coaching several of the younger generation of aspiring athletes.

When you factor in that she is also a professional sports masseur, then you have a winning combination and this was clearly demonstrated as she introduced the hill runners to the benefits of self-activation.

Sunday found the hill tops shrouded in mist. Undeterred (and led by expert local guide, Angela), the athletes took advantage of the excellent local terrain for a long run to the summit of Ben Venue and back over lesser hill tops to Aberfoyle.

The weekend was rounded off with with a short talk from Malcolm Patterson, the scottishathletics coach mentor (and weekend organiser), on planning and peaking, leading on to a discussion of the international opportunities for hill runners in 2017 at both Scottish and GB levels.