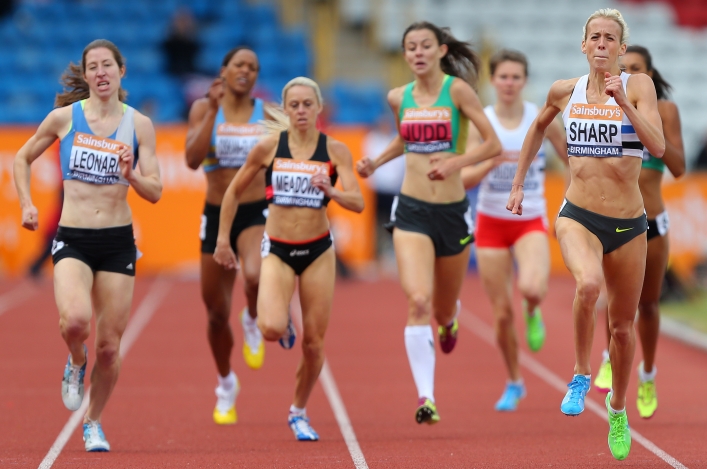 There was a hat trick on the track for Scottish athletes at the British Championships at the weekend, as Eilish McColgan, Eilidh Child and Lynsey Sharp topped their respective podiums in Birmingham. The haul of Scottish golds was added to by Allan Smith, who took the British title in the high jump.

The championship brought a third British title for Eilish, a second for Lynsey and firsts for both Eilidh and Allan.

Eilidh held her nerve under the pressure of being the favourite in the 400mH, and said of her gold: “I’m delighted, it’s my first outdoor title so just to actually win it for a change has been great. A lot of folk said that I should have been the favourite but it was going to be a tough race and I just wanted to go out there and win it, so I’m delighted to have got the win.”

The 3000m steeplechase saw a Scottish one-two with Lennie Waite taking silver behind Eilish. There was a silver too for Laura Muir in the 1500m, with a high quality performance that saw her just lose out to Laura Weightman on the line.

The Scottish medal haul was swelled by a further six bronze medals – an impressive jump of 6.42 by Sarah Warnock gave her both a PB and a bronze medal in the long jump, as well as taking her to fourth in the Scottish All Time list. That achievement was mirrored by Nick Percy with a fourth best-ever Scottish discus throw of 58.61, earning him bronze. Mark Dry also achieved a bronze in the hammer, with a 73.27 throw.

scottishathletics Chief Executive Nigel Holl said: “It was a good weekend in Birmingham, and a taster for the summer ahead once attention switches to Glasgow. It was great to see the established performers like Eilish, Laura, and Eilidh perform when it counts on the British
stage, and then to see Lynsey looking so supreme in the 800m after her injury challenges.

“We’re pleased to see Allan taking his first title, and good performances from so many other Scottish athletes. There are still three weeks to go until the Commonwealths – and the team are warming up well, although we know the challenges will be great at Hampden – bring it on!”