Lynsey Sharp has told European Athletics that Glasgow can offer the perfect stage for their 2019 European Indoor Champs.

The Emirates Arena has been put forward for the bidding process for the event by British Athletics, with support from Glasgow City, Event Scotland, the Scottish Government and scottishathletics.

Sharp, who won outdoor 800m European gold in 2012 and silver in 2014, is among the top athletes endorsing the Glasgow proposal via the official bid documents, which were submitted to European Athletics earlier this week.

‘Glasgow has a history of putting on unforgettable sporting events and the Scottish people bring an amazing support and enthusiasm to big sporting occasions,’ said Lynsey.

‘My own experiences of the Glasgow 2014 Commonwealth Games are proof that Glasgow would make a marvellous host city for 2019.’

If the bid is successful, it would mean Europe’s finest athletes returning to the city and country that hosted the biggest and most successful Commonwealth Games ever in 2014.

Built around the guiding principles of Passion, Innovation and Integrity the formal bid was submitted to European Athletics.

British Athletics, Glasgow City and Event Scotland aim to deliver the best ever European Athletics Indoor Championships based around the passionate support of the Scottish people that was such an integral part of the winning formula at Glasgow 2014.

‘The Commonwealth Games two years ago showed that Glasgow holds the ability to host big sporting events to the most exacting standards and this year’s 2016 Glasgow Indoor Grand Prix, hosted by British Athletics, has sold out months in advance, also demonstrating the huge support for elite athletics there is within the Scottish public,’ said Neils de Vos, chief executive of British Athletics.

‘I’m delighted that Glasgow City and Event Scotland decided to build on the success of the 2014 Games and previous British Athletics events held in the city by bidding to host European Athletics’ flagship indoor event in the Emirates Arena in 2019.

‘We believe that, if successful, Glasgow would establish a new standard for the European Indoor Athletics Championships against which all future editions would be measured.’

Delivering an innovative event is at the heart of the proposal, using an outstanding, modern purpose-built venue like the Emirates Arena will provide a canvas upon which cutting edge technology can be used to deliver world class event presentation and ensure an unforgettable spectator and athlete experience.

‘Glasgow is a great sporting city with a real heritage for athletics,’ said Jessica Ennis-Hill.

‘Glasgow hosted a hugely successful Commonwealth Games in 2014 with full stadiums and an amazing atmosphere. I personally feel Glasgow and its people would be very good hosts for the European Indoor Championships in 2019.’

The bid comes from a combination of committed and experienced partners with the financial backing secured and in place from Scottish Government and Glasgow City Council. 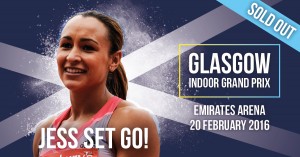