GB numbers add up to success

There’s always a whole host of factors at play whenever Great Britain selections come under scrutiny and performance statistics are discussed; be that between different eras or contrasting events.

It is part of the nature of athletics, it seems, even though often direct parallels are difficult.

So without raking too deeply through the history of athletics in Scotland in relation to GB teams,  let’s simply look at a few representative facts for Scottish athletes over the past month or two in track and field events across global and European competition.

The selection of seven Scots for the World Champs in Beijing was certainly a cause for celebration as British Athletics named Laura Muir, Lynsey Sharp, Eilidh Child, Mark Dry, Steph Twell, Chris O’Hare and Kirsten McAslan within a 62-strong party for China.

It was, as we noted on here, a tally which equalled the best-ever Scottish representation at the World Champs in their current form as achieved in 1983 at the first such event in Helsinki and then again two years ago in 2013 for Moscow.

And it also set the seal on a rather neat numbers sequence for Scottish athletes in the summer of 2015 as follows:

That’s 22 GB selections for Scots featuring 21 athletes, with Kirsten McAslan now doubling up on the Euro U23s and the World Champs.

And, while the numbers make pleasing reading for all, insisted chief executive Nigel Holl,  they must also act as an inspiration to wannabes the length and breadth of Scotland.

‘We firmly believe that building our role in ‘Performance Foundations’ – the tier below the support that UK Athletics and UK Sport can offer – is clearly one of the key positions for scottishathletics to adopt,’ said Nigel.

‘That stems from excellent and strong club-based coaching and competition programmes; areas where we are seeing real progress and development by clubs the length and breadth of Scotland.

‘I believe that Scotland’s ‘Performance Foundation’ impact stands out currently, with excellent representation by Scottish athletes  in GB selected teams this summer for track and field. That’s what these specific 4-5-6-7 numbers pertain to, although of course we’ve had similar ratios in hills and ultra events in the recent past and will do so soon again in Para athletics.

‘When we launched the Academy a few months ago, we made it clear greater representation on GB teams was one of the goals we wanted these athletes to meet.

The challenge for us all – athletes, coaches, support teams and governing body – is to somehow try and ensure this early and excellent success is just the start of things to come.

‘To have seven senior athletes selected to the World Championships is fantastic. But the strength of Scottish junior talent emerging firmly suggests that could be a number that rises – and rises consistently over the next few cycles.

‘So while it is right we praise and thank  the Scottish athletes representing GB this summer, I look also to challenge them and their coaches, their peers, and their club mates. Be inspired by our significant seven in Beiijing  . .  . or be equally inspired by athletes selected later this year for the IPC World Championships in Doha.

‘And then go and write your name on a ticket for that level of athletics in the future.’ 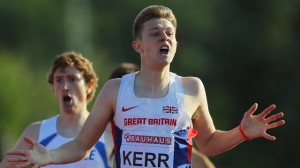 Vinco Sport Q and A interview with Josh