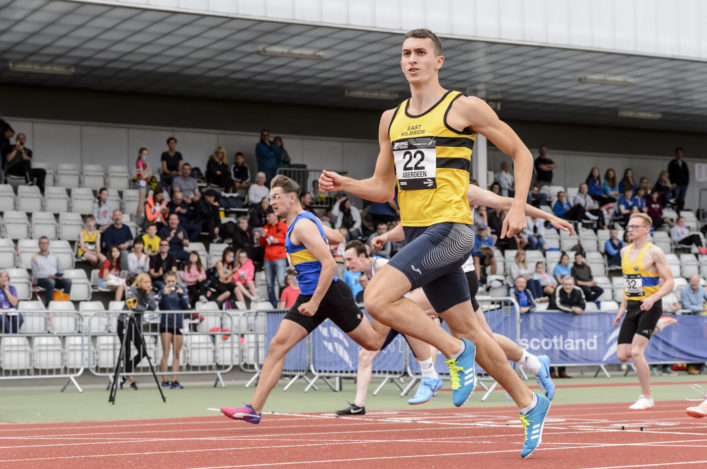 The FPSG Age Group Champs drew hundreds of athletes to Aberdeen from across the length and breadth of Scotland for a well-organised event that again delivered some exciting competition. All at scottishathletics would like to say a big thank-you to all athletes, coaches and clubs for your support and to our Officials for another big effort.

Our round-up looks to mention just some of the highlights in terms of performances while also capturing the atmosphere of the weekend.

New Scotland international Greg Kelly completed a hectic and fulfilling week with a fine gold medal double in the U20 sprints at the FPSG Age Group Champs.

The East Kilbride AC athlete had claimed a bronze in the final of the 100m at the FPSG Seniors at Grangemouth the previous weekend and then posted victories in the 100m and the 200m at Aberdeen.

In between, he wore a Scotland vest for the first time at Senior level in the Manchester international where he ran a windy PB in the 100m as a guest and then contributed to a strong third place in the 4 x 100m at the Regional Arena.

‘I’ve won Age Groups medals over the years coming up through the ranks and it was nice to get the double this time in Aberdeen.

‘The bronze in the Seniors felt good because I had a windy PB in the semi-final, too. I was ranked seventh on the start-lists so the first goal was to make the final. Getting on the podium was good and, with Michael Olsen getting injured, it crossed my mind that the Scotland team would have to change a bit for Manchester.

‘I was delighted to be selected and it was an enjoyable experience. The guest run went well and then, in the relay, Scotland managed to beat some good teams – GB Juniors were a DNF and we also beat the British League Select and Ireland. Wales had a top team and England only just nicked second from us despite their final leg runner being a 10.2 guy.

‘I will work hard again through the winter and then will have another go at the New Year Sprint. I won £4000 there a couple of years ago and I believe it is £8000 for 2019 because it is the 150th anniversary!’

Posted by Stornoway Running and Athletics Club on Saturday, 18 August 2018

Andrew Costello of Kilbarchan AAC won the U20 Men’s hammer with 58.44m while Murray Fotheringham cleared 2.03m for a new PB in the U20 high jump –  a week after winning the U17 title with 2.02 in the rain at Grangemouth.

Sarah Calvert of Livingston took an 800m/1500m double and Matthew Smith of Lasswade won the U20 Men’s gold at 1500m. Emily Craig won the U20 Women’s 400m Hurdles for the third year in succession.

For Dundee Hawkhill Harriers athlete, Declan Gall, it was quite a weekend as he scored a gold medal hat-trick in three U20 track events. Declan took gold in the 400m on Saturday and then the 400m hurdles and the 800m on Sunday – despite carrying a slight hip injury.

‘It’s good to win these medals because I’ve had six weeks out through injury and only just got back into training,’ said Declan, who is at university in Edinburgh and is part of the John Lees training group, with hurdles coaching from Francis Smith.

‘Early in the season I was called up for GB Juniors for the 4 x 400m at Loughborough but it turned out that I didn’t get a run which was very frustrating. I will keep working hard and just have to be faster next year.’

Keira Waddell, after winning the U17 title the week before, added the U20 Women’s javelin gold with a CBP of 44.17m 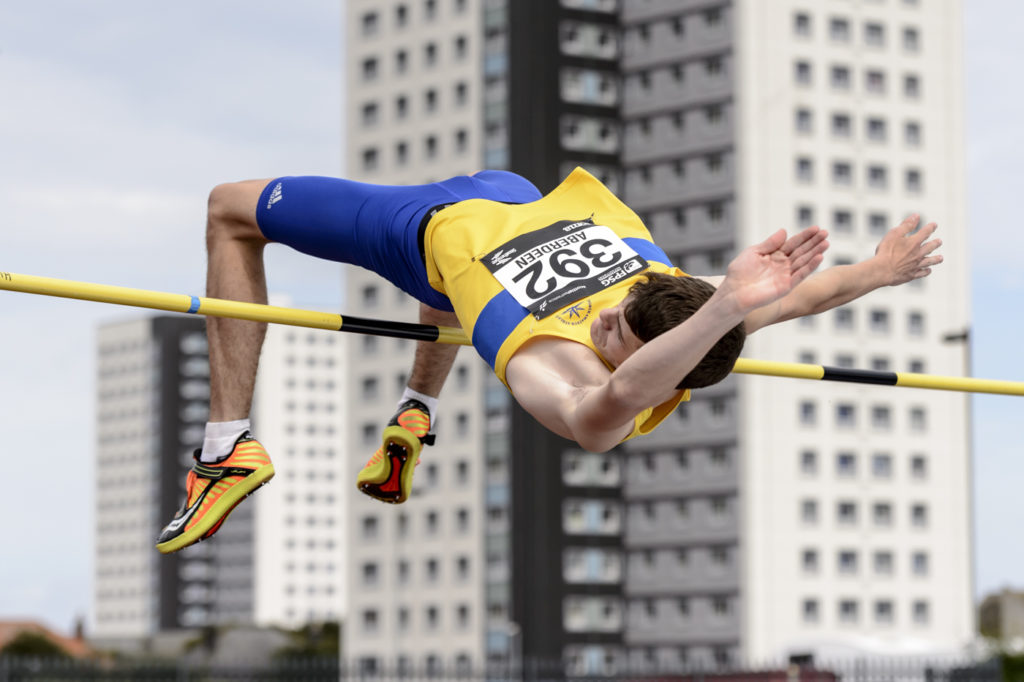 Murray Fotheringham on his way to 2.03m to win the U20 Men’s High Jump

The U13s offers many of our youngest athletes within clubs their first chance to compete in National Championships – stepping up from the likes of the popular U12s SUPERteams.

It’s also very much about clubs helping these youngsters to develop and we fully appreciate the effort made over the weekend by so many to commit to travel and compete in Aberdeen.

One glance at the U13 javelin result underlines the point. The three medallists were from Northern Ireland, Banchory Stonehaven and Law and District AAC.

And the rest of the field included visiting athletes from Inverness Harriers, VP-Glasgow, Chirnside Chasers (in the Borders), Dundee Hawkhill and Perth Strathtay. That’s what we call covering the length and breadth of Scotland  . . .  and over the Irish Sea, too.

Elsewhere in events there were athletes from the Western Isles in Stornoway and North Uist vests as well as those from Shetland AAC and Orkney, too.

Meghan Porterfield maintained her fine season with a CBP in the shot with a throw of 12.37m ( just a single second behind her latest pending age group record in the U13 shot). 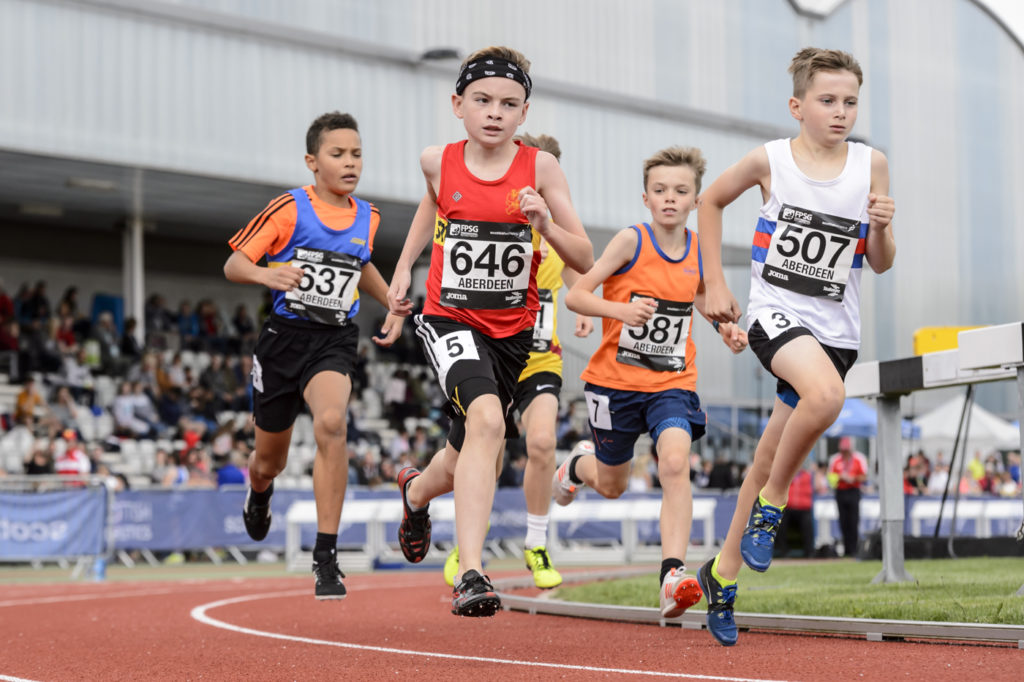 Action from the U13s on Saturday

Come Sunday and a wet morning gave way to improved conditions as our U15s contested PBs, final places and the medals at their National Championships.

There is always a sense at this age group of athletes on-the-move from their youngest years as a competitor to the later teen years – and the physical range can be big within a race or an event.

The U15 Girls High Jump was the top competition as gold medallist Abbey Orr of VP-Glasgow and Jilly Lefebvre of North Ayrshire AC both cleared 1.67m to match the previous CBP performance.

Both those athletes had made the commitment to compete in Aberdeen despite long trips and Pat Kelly, the Law and District AAC President and coach confirmed that some clubs see the likes of the Age Groups as a chance to build team spirit.

‘I’m not sure the exact number we had competing this weekend but certainly a dozen of more – a couple of families even made the journey in camper vans,’ said Pat, who has been attending these championship events ‘for about 40 years’.

‘Others are travelling together and staying together and I have to say the young athletes, our U13s and U15s, really do love it. For some, it is their first National Champs, their first final or their first medal. As a club, we do try to get away two or three times in the year to help build a team spirit – I think that’s good for an athletics club.’

Moira Maguire, Convenor of the Track and Field Commission, said: ‘I think what has been very noticeable is the spread of the club vests on the podium. It has been right across Scotland and it certainly looks to me as if it is not just the same few clubs all the time.

‘Of course the bigger clubs have more athletes involved but I think looking at the medallists and their clubs we are hopefully seeing signs of good development work taking place all around the country.’

Elgin athlete Kyle Wilkinson won the U15 Boys long jump with a good PB of 6.27m as well as the Triple Jump and another Elgin athlete, Tamsin Fowlie, took gold in the Girls 100m and a silver in the 200m.

‘Tamsin has been running now for three years and is improving her times each year,’ said Elgin AAC president and coach, Scott Hamilton.

‘She won a Scotland vest for the U16 team at the Celtic Games  earlier this month and then also competed at the U17s so it has been a very exciting few weeks for here. 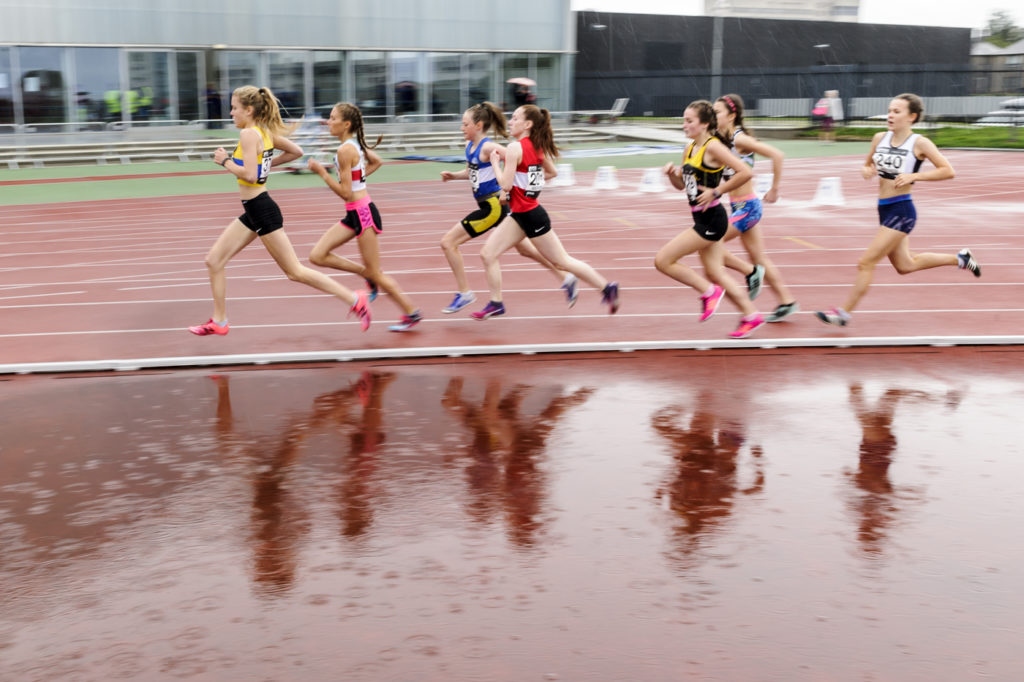 Action from the U15s in Aberdeen early on Sunday