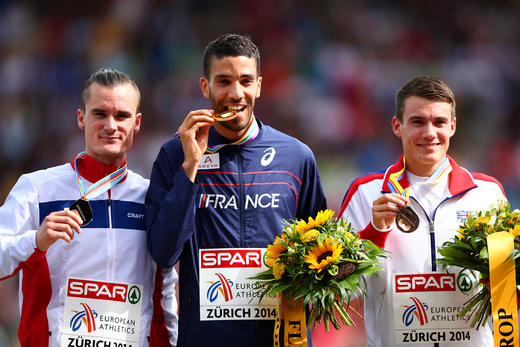 And Eilidh makes it four for Scots in Zurich

Chris O’Hare claimed the first major medal of his career as Scotland enjoyed a best European Championship performance since 1986.

The 1500m runner battled through an incident-packed race to snatch bronze medal on the line with a terrific late burst.

Eilidh Child then added bronze in the 4 x 400m relay to add to her 400m Hurdles gold from the previous day.

Scotland has won four medals before at the European Champs, back in 1986, but two of those medals were relay successes so arguably the Class of 2014  has exceeded all expectations with Child’s gold and bronze, Lynsey Sharp’s silver and O’Hare’s bronze.

‘This year’s been a bit of mess so I’m happy to come out of it with something,’ said Chris, who reached the final at the World Champs last summer and then was sixth in the Commonwealth Games at Hampden.

‘I’m looking forward to next year. I’m done with the season now. I only took three days off last year after Moscow so it’s been a two-year season so I’m glad it’s done.

‘I just got engaged to the most beautiful girl (Meredith Burns) in the world so I’m pretty happy at the moment.’

O’Hare went from around 8th place to third in the final 150m of a race full of bumping and bruising with his GB team-mate, Charlie Grice, unfortunately among the fallers as the slow pace in the first two or three laps prompted collisions.

French athlete Mahiedine Mekhissi-Benaddad, who lost out on gold in the steeplechase in controversial circumstances, won it in 3.45.60 with Norwegian Henrik Ingebrigtsen taking silver in 3.46.10 and Chris third in 3.46.18. He took the medal by only 17 hundredths from Ireland’s Paul Robinson. 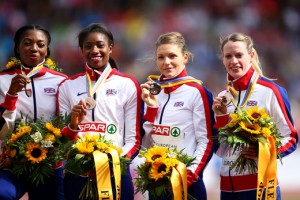 ‘It was really good to be part of the team and to come back and medal after the 400m hurdles final,’ said 27-year-old Child, who handed over to Kelly Massey, with the baton then going to Shana Cox and Margaret Adeoye.

‘We’ve given a good performance and I am really happy. We set our signts high and, ideally, we wanted the gold medals.’

The medal double for O’Hare and Child complete a superb championships for Scots, with Beth Potter and Laura Muir having been involved earlier in the week.

Britain’s Jo Pavey grabbed the headlines with a thrilling victory in the 10,000m with Potter having performed gamely for much of the race.

The Scot, fifth in the Commonwealths at that distance and having also competed in the 5000m at Hampden, eventually finished 14th from a field of 26 in Zurich with a time of 32.53.17.

Muir was the first of the Scots in action, last Tuesday morning, but unfortunately the 21-year-old didn’t make it through the 1500m heats.

Laura finished sixth in the first heat in 4.14.69 but that wasn’t enough to qualify.

‘I knew it was going to be really tough and I tried in the last 100m to improve the time because I knew it would come down to that,’ said the Dundee Hawkhill Harriers athlete. ‘It was a messy race and I was close to falling a couple of times but thankfully kept my feet. I’m here to learn.’