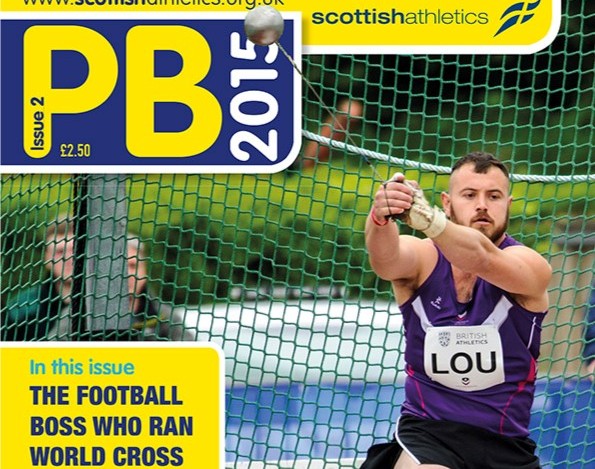 Mark Dry makes the front cover of the latest edition of PB magazine – which is being issued to scottishathletics members this week.

It was a logical choice after the Commonwealth Games hammer medallist broke one of the longest records in the sport with a throw of 76.93m at the Loughborough International.

Bobby Gavin’s photo from the event is our front page and there’s so much more inside the magazine:

There is also our now regular section on Grassroots Athletics with the clubs in the spotlight this time to include: Giffnock North AAC, East Kilbride AC, Whitemoss AAC, Mull AC, Caithness AAC, Garscube Harriers and Helensburgh AAC.

And, as a new feature in this edition, we’ve introduced an ‘Education Section’ to the magazine across six-pages with advice on Mindset, Nutrition and Social Media. These areas have been part of the National Academy syllabus and we’re extending that expertise to members via PB.

Chief executive Nigel Holl writes his regular column and reflects that with Glasgow 2014 no longer in the offing to safeguard investment, there are challenges ahead for the sport – but stresses that clubs will always remain the priority for the governing body.

‘The Games are no longer there as a home event to protect such investment moving forward, and we may well over the next few years be facing the ‘double whammy’ of increasing costs for venues as well,’ said Nigel.

‘The understandable financial pressures on local authorities and leisure trusts are starting to have an impact and possible reduced investment from Scottish Government (through sportscotland) into the governing body will present challenges, too.

‘Anticipating such impact, and being prepared for it, is important for us all. Having been in a dialogue with sportscotland regarding investment for the 2015-2019 period, we may need to ensure a greater focus to the work we do.

‘If that is the case, our commitment to working with and supporting athletics clubs is as high a priority as we have. The impact that you as clubs and club members have made in recent years is simply astonishing and we will prioritise continuing to assist you deliver your aspirations. That may mean doing things slightly differently – but be assured that clubs are ‘out front and central’ in our priorities.

‘Having shared the potential for some challenges above, I’m also very much an optimist.

‘With the catalyst of London and Glasgow behind us, I’m busy looking ahead to the next such opportunity. I think we do have opportunities coming our way that we as a sport, and we as an athletics family in Scotland, can benefit from.

‘The year 2017 should be significant;  world athletics and world IPC Championships in London. The next best thing to an Olympics in London? These championships will bring a huge focus and attention to athletics across the UK – and we need to be prepared to make sure Scotland, Scottish athletes, and Scottish clubs feel a positive impact.’

We hope scottishathletics members enjoy the new edition of PB . . . 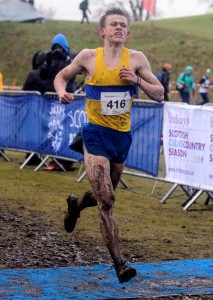 This photo by Bobby Gavin of Luke Traynor finishing third at the National XC forms part of our PB feature on Giffnock North AAC.