From Peter Jardine in Birmingham

Scotland’s 4x100m Women set a new National Record at the Diamond League meet in Birmingham and posted a Commonwealth Games standard as they clocked 44.75.

And Laura Muir returned from injury to open her outdoor season with 1500m victory at the redeveloped Alexander Stadium.

The venue will host the Commonwealth Games later this summer and the atmosphere in the Birmingham stadium didn’t disappoint.

The relay team of Rebecca Matheson, Alisha Rees, Sarah Malone and Taylah Spence did superbly well on each leg and their change-overs to post 44.75.

It was enough for fourth place and the smiles and celebrations as the team gathered down the track were a joy to see. The 44.75 time is also ‘on the button’ for the Games qualifying standards.

To add to the feelgood factor around Scottish sprinting, Beth Dobbin was in the GB and NI team who won the race with a 42.29.

Laura was injured during the winter and missed the Indoor Season while Jemma is now recovered from glandular fever.

Josh Kerr finished fifth in his 1500m race with the Edinburgh AC athlete stressing he will head back to the United States to ‘sharpen up’ for the British Champs. 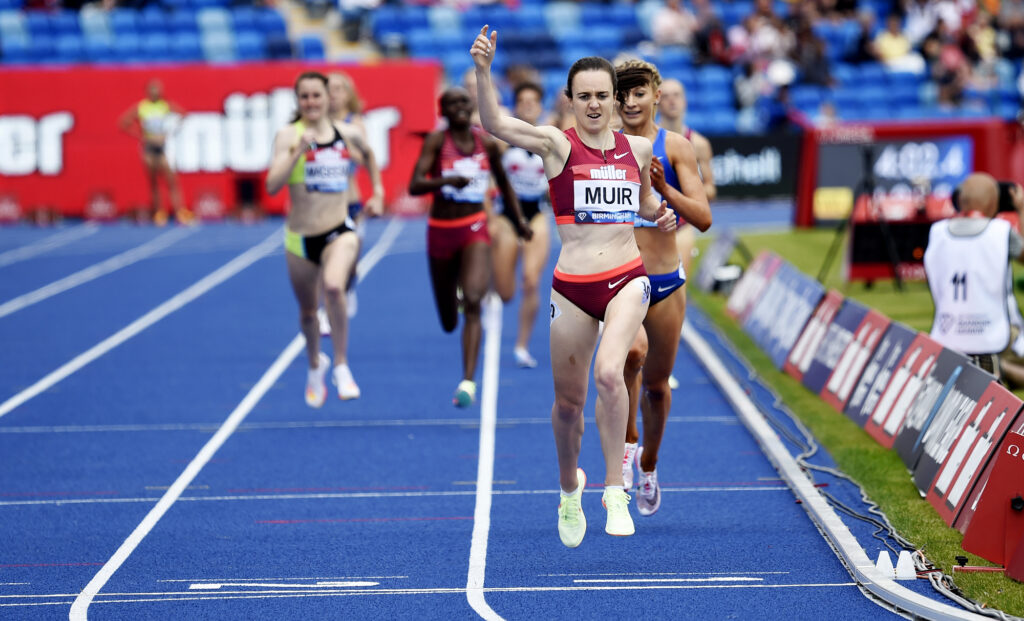 ‘To come here and win in my first race of the season I am really, really happy,’ said Laura.

‘The win was more important than the time in my first race especially as it was quite windy out there. It was solid and running from the front too.

‘I am looking forward to getting my first sub four minutes run this year but happy to nail the World Champs standard early in the season.  There were no natural front runners so I needed to be prepared to take it out.

‘I want to do all three championships this year and I loved the stadium and the atmosphere. It will be brilliant for the Commonwealths.’

Jenny Selman and Jill Cherry stepped into the Diamond League experience for the first time, with invitations to compete in the Women’s B 800m.

Zoey Clark took the win in the Women’s 400m B race as she followed up her two solid performances at Grangemouth a week earlier.

The Aberdeen AAC athlete had clocked a sub 52-seconds run last Sunday and did so again this time with 51.88.

‘The track felt nice but my goodness to have a crowd again felt wonderful – the atmosphere was unreal,’ said Zoey.

‘To have Robbie (Grabarz) get his medal just before gave me such a boost so I felt great as I started.

‘I am going to have a couple of weeks off to recover now then get back to solid training and hope to sneak in a couple of 100 and 200m races in to work on my speed.’

Kirsty Law stepped into the diamond League arena in the discus and finished eighth with a best throw of 55.35m. Nick Percy was sixth in the Men’s discus at 63.03m.

Scotland men clocked 40.08 to finish sixth in the 4x100m relay thanks to the efforts of Adam Thomas, Stephen Dunlop, Michael Olsen and Krishawn Aiken.

In the Para events, Mel Woods took second in her Women’s Wheelchair 400m race with 58.46. Adam Donnachie was at 7.85m in the seated shot.

It's all underway at @Birmingham_DL with the first Scot in action, @AdamDonnachie00, completing his throws in the seated shot – it's 7.85 best throw 👌
Follow the results: https://t.co/McMGtAPwO1
📸@PamRobson_11 pic.twitter.com/gI9MP8eYtV