Andy Butchart and Kirsty Law both posted seventh place finishes at the Commonwealth Games on the opening day of track and field action.

It was a thrilling start to the programme at Alexander Stadium with the atmosphere superb for both morning and evening sessions.

Butchart did his best to mix it with the leaders in the Men’s 10,000m final but by his own admission the last five laps saw the race move away from him as Uganda’s Jacob Kiplimo posted a Games Record to win in 27:09.19 after he out-kicked Kenyan Daniel Ebenjo.

The Central AC athlete clocked 27.53.57 himself and will now weigh up carefully whether to take on the 5000m later this week.

Kirsty for her part did enough in the first three throws, with 53.38m, to merit a further three within the top eight of the Women’s final.

The Inverness Harriers athlete improved to 54.38m in the second set of throws but had to settle for seventh place in her second Commonwealths, after also competing at Glasgow 2014.

‘It was brilliant to race for the first time in the Games and the atmosphere inside the stadium was just absolutely mad – pretty special, in fact,’ said Andy.

‘I knew the kind of race it would be and there was a lot of quality. I stayed with it for as long as I could but it was just too hot for me with five laps to go.

‘I didn’t make Glasgow 2014 and I was injured for Gold Coast 2018 so here I am at last at the Commonwealths in a Scotland vest. I’d a lot of family and friends here – a lot of team-mates from Central AC and my old coach.’

Kirsty said: ‘The atmosphere was amazing but I am a bit annoyed. There was a medal up for grabs but I just could not put a throw together on the night – so well done to the top three who did.’

Team Scotland opened up at the Alexander Stadium in the first track and field session of the Commonwealth Games – with mixed fortunes.

Adam Thomas was the first Scot to take to the track and he relished his opportunity with second place in his Men’s 100m heat to qualify with a 10.30 run that took him straight through to the semi-finals.

Nick Percy followed him with progression in his event as the discus thrower reach 60.68m to finish in the top three in his qualifying pool. Nick will now rest up and recover ahead of Thursday’s final.

The Women’s 800m heats always looked cut-throat with the top two and two others to progress to the final (with no semi-final on the schedule).

Laura Muir ran a fast 1:58.84 for second in her race to qualify for her first Commonwealth Games final since Glasgow 2014 when she raced in the 1500m. Laura is now looking to double up this time.

But Jenny Selman, fifth in 2:06.53 after a hamstring niggle late last week, and Jemma Reekie, third in the last race in 2:00.68, both missed out. There was an appeal re Jemma’s elimination but that was rejected. 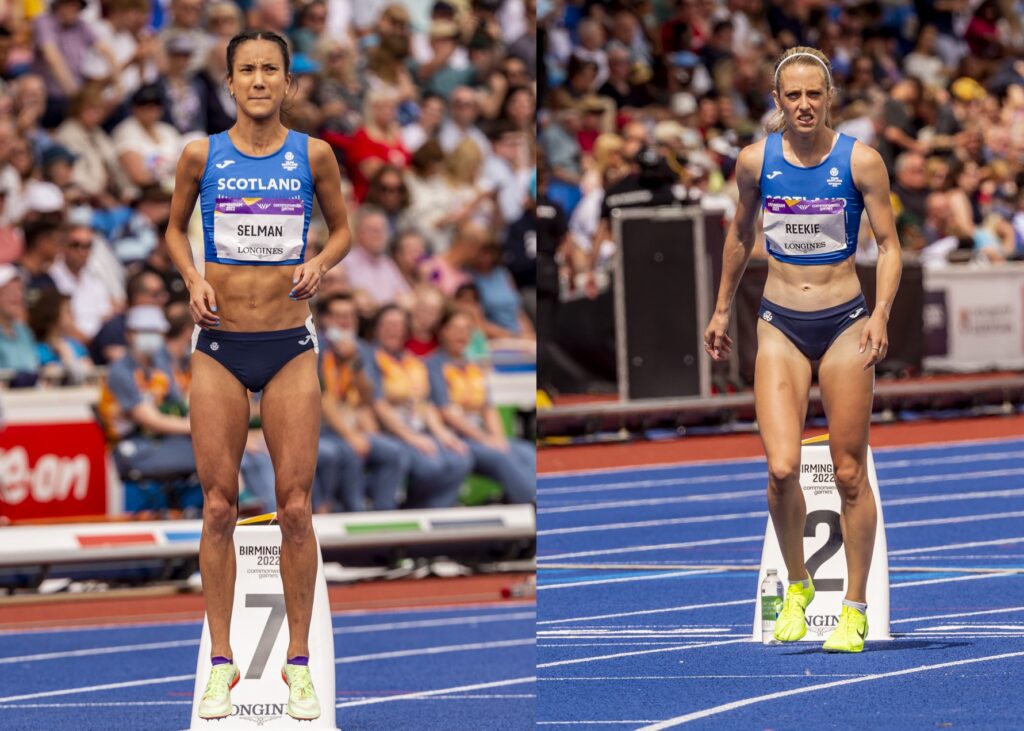 Alisha Rees clocked 11.36 seconds for fourth in the first heat of the Women’s 100m.

That was just outside the three automatic places and the Scot had to endure a long wait before all seven heats were completed to learn she had progressed via three other slots.

‘It was great to be wearing the Team Scotland vest at the Commonwealths and my family will be proud,’ said Adam, the first Scottish male through to a semi-finals since Elliot Bunney in 1994 (outside of Para events).

Alisha for her part is the first athlete into the semis in the Women’s 100m since Gosia Rostek in 1998.

‘I wanted to try and enjoy it and that’s why I’d a big smile on the start-line. My coach had stressed to me that you have to try and savour the experience.

‘I was thinking about all the years of training, the hard work that goes in, the sessions we’ve done. Now I am in the semi-final and hopefully I can maybe run even quicker and make that final. That would be very special.’

Nick Percy felt the same with the Scottish Discus Record holder having had Covid immediately after his World Champs experience in Oregon.

‘Yes, it has been tough because that knocked out our plans for the final preparation for here,’ said Nick.

‘I’m just glad I did enough to get through in the qualifying and I thought somewhere around 61m would be enough – the conditions are windy and tough for discus throwing.

‘I’m in the final now and it is Thursday night so that gives me more days to rest and recover.’