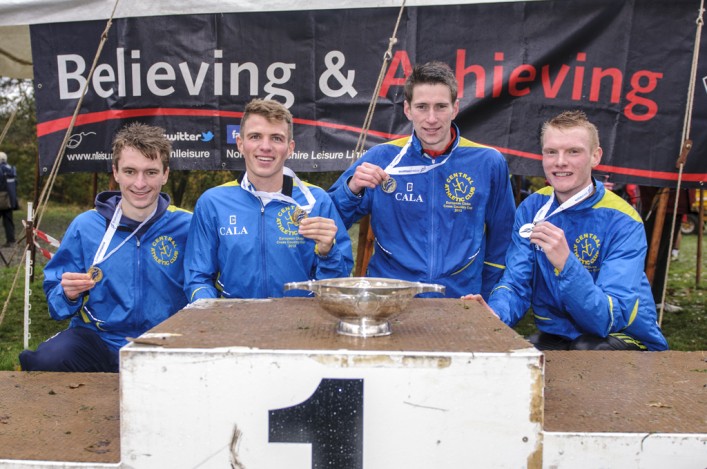 Central AC – hat-trick heroes: Cameron Milne, Andrew Butchart, Alex Hendry, Scott McDonald. Photo by Bobby Gavin   All the Results Mud. Rain. Wind. Hills. Sunshine (on occasion). The National XC Relays had everything you could wish for to generate a great day’s cross country action – and a lot more besides. Come the final analysis, there was a familiar outcome on top of the podium as Central AC made it a double hat-trick by retaining both the Senior Women’s and Senior Men’s titles for the third successive year. Our highlights package, created by VincoSport, and with assistance from North Lanarkshire Leisure is now online. Central were challenged this year, however, and trailed in both races at different times as other clubs sought to derail them. But the ‘yellow train’ duly made it home first to the podium platform. Ronhill Cambuslang were other predictable winners in the V40 Men’s age group – that’s five years in  a row in that category for the Glasgow club – while it was a joy day for Edinburgh AC in the Young Males race and Giffnock North in the Young Females. Overall, there was a marvellous ‘community’ feeling in the park around Cumbernauld House as the event marked the start of the Lindsays Cross Country season. Thanks are due once again to hosts North Lanarkshire Leisure as well local clubs Cumbernauld ACC and Kirkintilloch Olympians (who made the podium three times at vets level). Finisher numbers will be confirmed in due course but there’s little doubt clubs are showing great commitment to competition. The the inclusive nature of days like this – with athletes from U13 to V50 – is not in dispute. Stories abound of course but what about this one: Kilbarchan veteran Bobby Quinn, 48 and in his 34th season of cross country, took a bronze medal – with 17-year-olds Euan Gillham and Gavin McArdle on the podium alongside him. The presence of Team Scotland’s Callum Hawkins certainly helped that team. Central brought in triathlete Cameron Milne for their first team with Ross Houston resting an Achilles injury and Alex Hendry and Scott McDonald were on legs two and three before in-form Andrew Butchart was unleashed. Inverclyde led at that stage with Craig Ruddy having built on the runs of U20 Jonathon Glen and Andrew Douglas but Butchart hunted down Dan Mulhare on a superb final leg for the holders. Butchart’s 12.23 was fastest lap by three seconds from Hawkins. ‘We are in a wee bit of transition at the moment so it was good to still win again at both men’s and women’s level,’ said Derek Easton. ‘A couple of our more senior athletes like Ali Hay and Robert Russell weren’t here and Ross Houston was advised not to run by his physio. So the younger ones at Central are carrying a mantle. ‘There’s always a challenge coming in and other teams do their best to beat us. Andrew took over in second place but with the way he has been running recently – fastest leg at the English road relays recently – I was confident then we’d take the golds. ‘He is in exceptional form at the moment so we’re optimistic for the GB cross country trials in Liverpool – although he just misses the U23 age group and has to chase a Senior slot for the Europeans.’ It was a similar story for the Central women, with the challenge led initially by Edinburgh Uni Hares and Hounds. GB International Rhona Auckland was on the first leg and built up a big lead with U20 Kathryn Gillespie opening for Central. Jennifer Emsley made very significant inroads, however, and Morag MacLarty was able to push through into first early in the third leg and Edinburgh AC duly came through for the silver medals courtesy of Rachael Dunn, Laura Dunn and Maddy Murray. Edinburgh Uni held on bravely for third despite pressure from Rosie Smith of Hunters Bog Trotters. ‘I think Jenny was the one who closed the gap the most,’ said MacLarty. ‘I believe when she took it on we were maybe more than 60 seconds behind but it was only 20 when she handed to me. That’s three in a row for Central and we’re delighted with that. ‘Kathryn has stepped up in her first race as an Under 20 and I know she took her 1500m track time down significantly at the end of the season to 4.19. So that’s another really good athlete with us to add to people like Lyndsay Morrison and Fiona Thompson, who were not running today – it is a good squad. ‘Rhona had a fantastic opening leg for Edinburgh Uni. She went off like a rocket.’ Auckland had the fastest lap at 14.25 with MacLarty at 14.45. Laura Muir ran the second leg for Glasgow Uni – as she did the previous year – and the GB International plans to be at Bellahouston for the 4K. Cambuslang picked up the Men’s vets title from Greenock Glenpark with Kirkintilloch Olympians taking bronze.  Shettleston Harriers won the V50 men’s crown, overhauling Cambuslang, with Edinburgh AC in third. Central AC won the Women’s v50 category from Giffnock North and Kirkintilloch with the Women’s V40 golds collected by Gala Harriers from Edinburgh AC and Kirkintilloch.   JUNIOR RACES 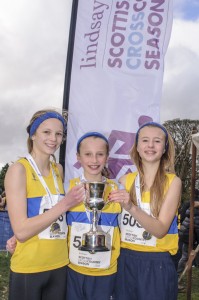 Congratulations to Giffnock North and Edinburgh AC on National XC Relay title success in the Young Females and Young Males races respectively. Inverclyde led the charge initially in the first race of the day for the U13,U15 and U17 girls. Danielle Kelly of Giffnock pulled that back towards the end of the second leg and handed over to Erin Wallace to anchor home the Glasgow club. Wallace is an U15 athlete but had more than enough to lead Giffnock to gold with Kilbarchan AAc coming through for silver. Holders Central AC had to settle for third this time but made sure yellow dominated the podium photographs alongside Kilbarchan and winners Giffnock. Edinburgh AC took the Young Males title with Alex Carcas bringing it home for the capital club as the U17 athlete. Kilbarchan had to settle for second again in this race with Giffnock North in third to make it a good day for those two clubs in terms of the junior race podiums. Congratulations to all junior athletes, coaches, parents and volunteers who contributed to a spectacular afternoon at Cumbernauld.