Callum wins Scottish half on debut 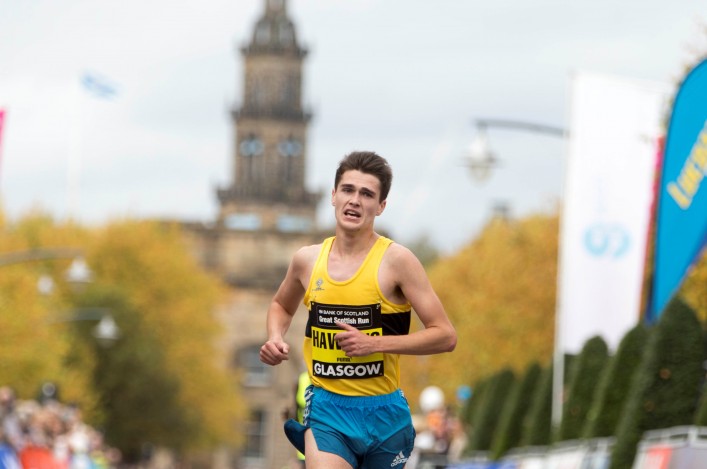 Callum Hawkins won the Scottish Half Marathon title with a superb debut at the distance in the Great Scottish Run.

The Team Scotland 10,000m runner clocked an impressive 63.06 as he finished sixth overall in a quality field.

South African Stephen Mokoka won the race itself with 61.25 on a day when defending champion, Haile Gebrselassie, dropped out with ‘breathing difficulties’ and Glasgow 2014 marathon champion Michael Shelley finished fifth.

Susan Partridge took the Scottish Half marathon title for the second successive year but while she won the Great Scottish Run in 2013 she was fifth this time around with Edna Kiplagat imperious in victory in 67.57. The action is available on the BBC website.

‘It was only in the past few days that we took the deicison to switch from the 10k. I just looked at everything and thought it would be good to test myself at half marathon and try the distance.

‘I felt good and I’ve been in Boulder on altitude training with Steve Jones so that’s clearly helped. The last mile was tough because I’d kicked on a bit before that and pushed it a bit.

‘To be honest I was hoping for 64 minutes or so and then running down the straight I could see there was maybe an outside chance of getting 62 something as the clocked ticked down.

‘But I have to be very satisfied with this on my debut – I may do another half at some stage but well into next year I would think.

‘The focus now is the European XC trials at Liverpool and trying to help Team GB to medals in that if possible.’

Callum’s run is the fourth best in the British rankings for 2014 and he finished only 12 seconds behind Commonwealth marathon gold medallist Shelley.

Mokoka said: ‘I enjoyed running through Glasgow. People saw my name on my number and were shouting for me which was a great feeling. I also saw a South African flag at one point.

‘It was a shame Haile dropped out. Many of us are still in awe of him – it is a bit scary lining up alongside him at the start. I’m sure he can come back with this because he is such an amazing athlete.’

Marathon runner Partridge didn’t stay with the African women early on – Kiplagat won it from Caroline Kilel and Tiki Gelana – but wasn’t too dis-satisfied with 72.12 after a hectic year.

‘It wasn’t a bad run – it was fine,’ said Susan, fifth in the race this time.

‘It wasn’t spectacular like last year when I surprised even myself but it has been a long year now and I’m ready for a break. I think sometimes you need to listen to your body and take a break when the time is right.‘

The Scottish Half Marathon team medals are as follows:

The Vets medals are as follows: 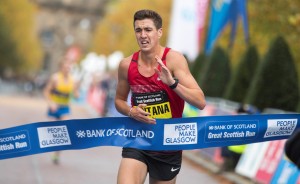 It was a good day for Victoria Park-City of Glasgow athletes with Sean Fontana winning the 10k to join club-mates Partridge and Potter on the Scottish podium. He did so with a sprint finish just denying Giffnock North’s  Luke Traynor on the final straight in Glasgow Green.

Fontana’s time was 31.03 to win by six seconds with Ryan Riddell third in 32.51. Sean struggled immediately after the finish and revealed he had thought about dropping out.

‘Around 4k I was going to stop because I’d a stitch and I suffer from asthma,’ he said.

‘Stupidly I forgot my inhaler this weekend and this is the worst I’ve felt, health-wise, during a race. But I thought ‘it’s only a stich’ and I just had to keep going.

‘If Luke had kicked more with 1k to go then I would not have been able to stay with it but he didn’t. It is pleasing to win and add this title to the Scottish 5000m Champs from Kilmarnock.

‘The crowd is so good when you turn into Glasgow Green and I honestly think I could hear my mum shouting me on. That gave me the spur for the final straight and the sprint. It was all or nothing by that stage.’

‘I’m delighted to win it and although it was not a PB for me it was a lot better run than I managed in Stirling last month in the Scottish 10k Champs,’ said Laura.