Athletics in Scotland has lost another-well known figure with the passing earlier in the week of Bill Stoddart. He was 84.

He didn’t start running seriously until his 30s, after winning district and national table tennis titles and playing football for many years.

Hundreds of athletics trophies soon started pouring in as he stepped up his training, and he gained his first Scottish international vest at the age of 37.

He won the first Inverclyde Marathon in 1981 in two hours 27 minutes 53 seconds, one of the best times in the world for a 50-year-old.

Gerry Gaffney of Inverclyde AC said: ‘Ex-Wellpark members have told me of the encouragement and support Bill gave them during their time at the club, and of his tenacity and determination as an athlete. If you wanted to beat Bill, you had to run some!

‘He still could be seen running along Gourock or around his beloved Battery Park well into his 70s. Scottish Athletics has certainly lost a stalwart and great ambassador for the sport.’

Bill Stoddart’s funeral will be at Greenock Crematorium on Wednesday 19 August at 12 noon. 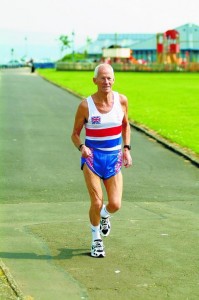