Josh Kerr claimed a quite superb bronze medal in the Men’s 1500m final at the Olympics.

We’d waited 33 years to witness a Scot land an individual medal at the Olympics when Laura Muir took silver – and Josh followed that up in fine style just 23 hours later!

The Edinburgh AC athlete timed his last lap to perfection to glide into contention as Jakob Ingebrigtsen, the 20-year-old Norwegian, won with an Olympic Record of 3:28.32.

Timothy Cheruiyot had to settle for second and Josh was just four hundredths from silver, in fact, with his 3:29.05 time a new Scottish Record.

It was an awesome performance from the Scot in a truly spectacular race which featured three British athletes in the Men’s 1500m final for the first time since 1984.

Jake Wightman had to accept a 10th place finish in 3:35.09 after making early inroads on the blistering pace set by the top three. Welsh athlete Jake Heyward took ninth place.

Well done to Josh, his coach Danny Mackey, his family and all at Edinburgh AC.

‘I was just throwing everything I had at it and I said that from the get go,’ said Josh in Tokyo.

‘How bad was that first round huh? That really gives you a kick up the backside!

‘So it was good to get that bronze medal. I got better by round and that’s the name of the game in this sport and at the Olympic Games and any World Championships major.

‘I went out there to have some fun, had a smile on my face and I was hunting all day for a medal.’

Jake won bronze at the Commonwealths and Europeans in 2018 but had to defer to his Edinburgh AC club-mate this time.

‘It’s pretty gutting,’ he said. ‘I had such a good opportunity and Josh showed that if you take that opportunity what can happen.

‘I just committed a lot at the start and I don’t think I’m quite good enough for those quick races off the back of the rounds which showed today. So there’s a lot of stuff I hope I can take from this as we go forward.’ 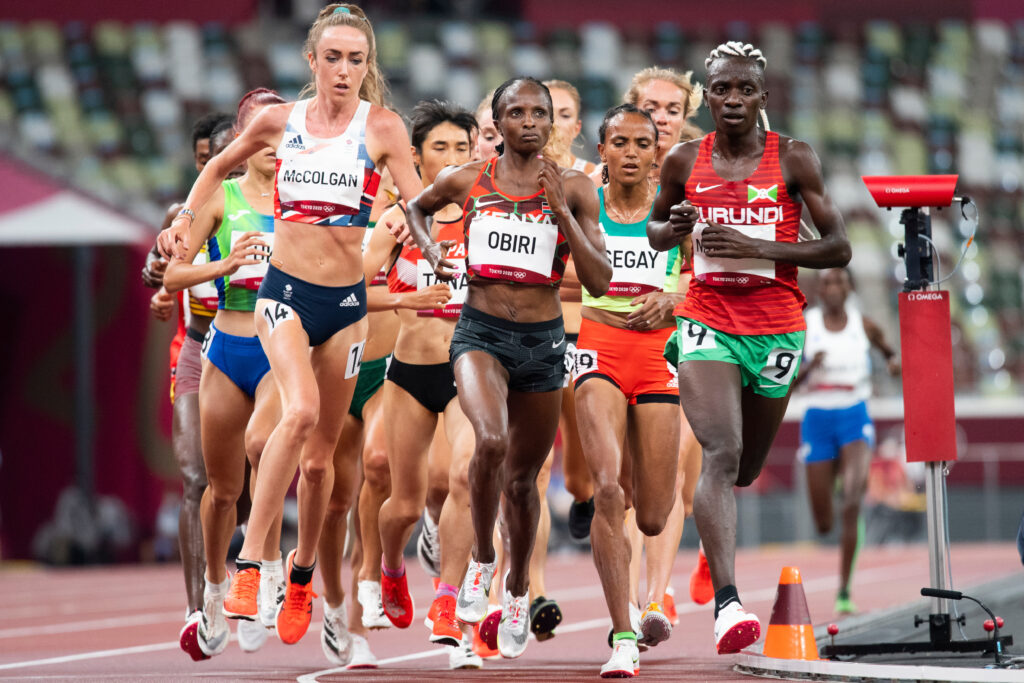 Determined Eilish McColgan delivered a very solid performance in the sapping heat and humidity of the Olympic Women’s 10,000m final.

We make it Eilish was the third European on the finishing list on a night when there were a handful of DNFs due to the conditions.

‘It was tough, one of the toughest races I’ve ran, so I’m proud of myself for finishing,’ said Eilish.

‘There were definitely points where I didn’t think I was going to make it, but I think mentally for me I just wanted to have a better race than I did in the 5000m, I was determined to bounce back and have a better run.

‘I would have loved to have dipped under 31 minutes, I think I ran 31:04, so a little disappointed to not have had my eye on running my Mum’s Scottish record. I’d have loved to have sneaked under that and got a PB, but in those conditions I can’t ask for any more.’

The GB and NI Women’s 4x400m team finished fifth in their final – as the medals went to the United States, Poland and Jamaica.

There was a Season’s Best run from the quartet of Ama Pipi, Jodie Williams, Emily Diamond and Nicole Yeargin.

Pitreavie AAC’s Yeargin had a last leg split of 50.44 and said later: ‘It’s bittersweet you know, it actually came around fast, it’s crazy how fast the 4×4 goes by.

‘There will always be next year, so we’ll just come back even stronger. I came out here knowing that it wasn’t going to be like NCAAs, where you can probably catch a big gap, so I just tried my best to hold on and I’ll continue to do that for next year.’