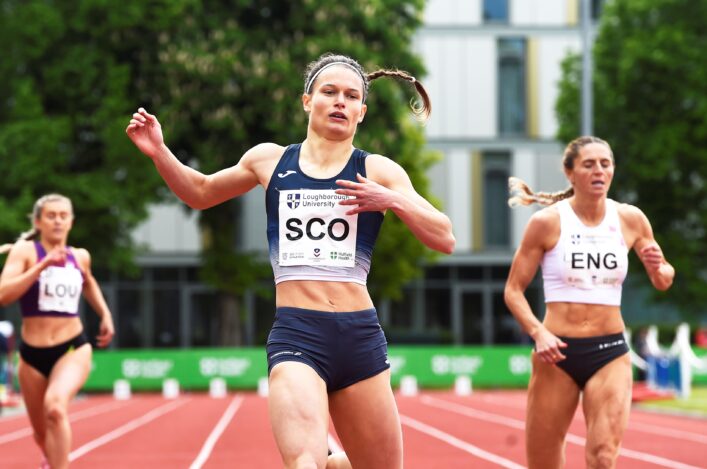 *This report working off Results not yet fully confirmed – place when given is in the Match itself (not counting guests).

Zoey Clark played a captain’s role to lead Scotland in the Loughborough International on a day of fine individual performances.

There were seven winners in all in the Match, in fact, on a day when Scottish athletes also delivered Commonwealth Games qualifying standards, a handful of second places and a Euro U20 qualifying mark.

High jumper Will Grimsey had already posted the first victory for those in dark blue when Zoey set the tone for further success on the track with an impressive victory in the Women’s 400m.

It was to be followed by more sprint success via Beth Dobbin in the Women’s 200m as well as a terrific Scottish double in the 3000m steeplechase races mid-afternoon at the Paula Radcliffe Stadium – with wins there for first Jonny Glen and then Sarah Tait.

Kirsty Law winning the discus at the Loughborough International has been a feature in recent years and another big throw, at 58.59m, make it three-in-a-row for the British champion via first places in 2018, 2019 and now 2021.

Nick Percy won full points for Scotland in terms of the Match with 62.20m, although he had to settle for second in the comp as guest athlete Lawrence Okoye reached over 64m.

Cold and windy conditions probably counted against PBs and good times, heights and distances but hammer thrower Rachel Hunter was thrilled to throw to 65.32m – her best throw since 2017 – and post a Commonwealth Games qualifying time.

‘I was so proud to be captain for Scotland for the event,’ said Zoey.

‘It’s about ten years now that I’ve been running for Scotland through the age group levels and so on and, if I look back, I could never ever have imagined that I’d be team captain for Scotland in the Loughborough International. I feel it is a big honour.

‘Having been a year or more without competition, I think that has put a lot of things in perspective. We’re all just desperate to compete again.  I said in my captain’s speech (on Zoom!) to everyone just to savour it and enjoy it.’

Fellow GB international Dobbin never looked in danger of not adding to the victories in her 200m race, taking the line in 23.19 ahead of England runner Ama Pipi.

Beth is off to Poland next week for the European Team Champs and she’s joined in that GB and NI selection by Will Grimsey.

That will be his Senior GB debut but it was a Scotland bow first and Loughborough provided the perfect preparation.

‘It’s a great kit and my mum will be very proud to see me represent Scotland – she will want a photo,’ he smiled.

‘I’ve had a couple of competitions to get started so this was my third one and it is good to keep building and progressing. Being out there competing with the other guys helps.’ 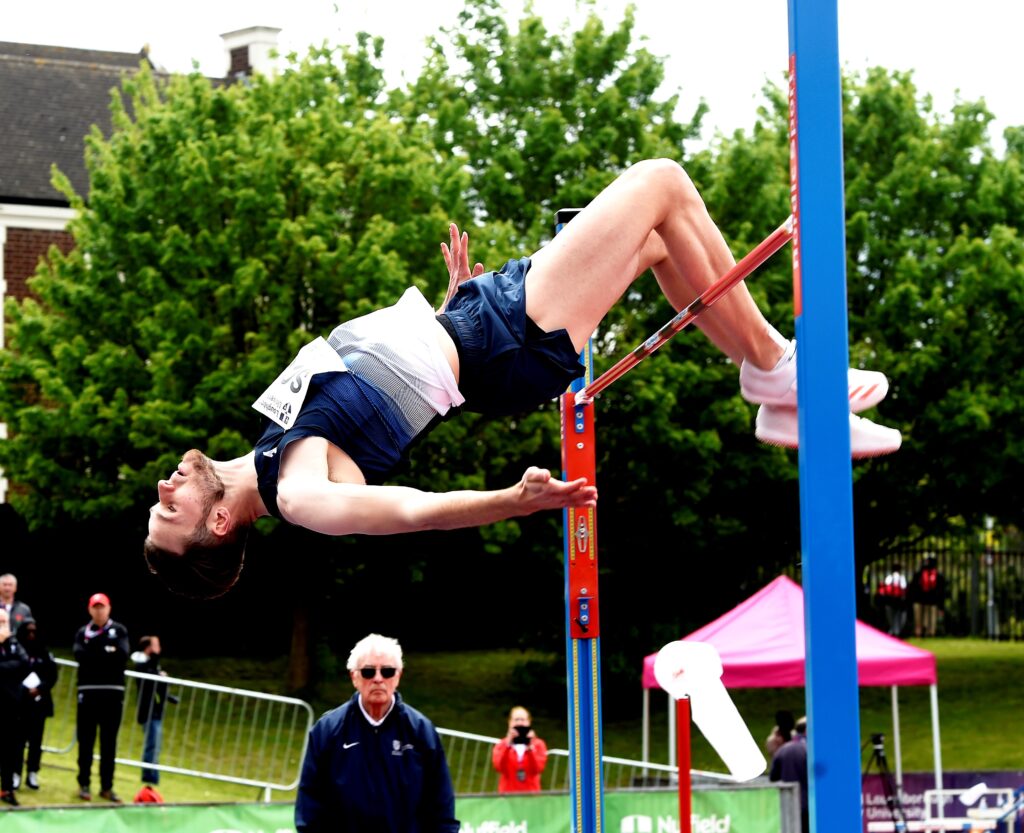 Glen set his stall out early in his steeplechase win; breaking clear in the opening stages and then working hard to maintain a big lead. When he suddenly realised he faced a home straight challenge, his reaction over the final 10m proved just enough to see off England’s Chris Perry.

Tait had to be more patient, sitting on the Welsh athlete for the vast majority of the race before moving ahead just before the bell.

‘I was so pleased to be selected for Scotland for my first Senior vest,’ said Sarah. ‘I knew with it being a bit windy that it would be more of a tactical race and that’s what happened.’

There were second places in the throws for our hammer throwers, Chris Bennett and Rachel Hunter.

Rachel reached 65.32m with her best throw for a number of years and that is well over the Team Scotland qualifying standard for the Commonwealth Games. Chris was at 74.73m.

Alisha Rees was another athlete taking a second place – with 11.76 in her 100m race as GB Junior athlete, Success Eduan, won it in a close finish with 11.72.

And Fife AC’s Jenny Selman fought extremely hard for her second place in the Women’s 1500m with 4:21.03 as England’s Revee Walcott-Nolan won it by one second.

In the jumps, Henry Clarkson was second in the Match competition with 14.70m.

And the Women’s 4x400m team also took second place after a combined effort from Clark, Kelsey Stewart, Georgina Adam and Dobbin for 3:38.46.

Add in a second place for Scottish athlete, Reuben Nairne of Giffnock North AC, competing as a guest in the pole vault, and it really was a fine day collectively. Reuben soared to a new PB of 4.90m.

It was also a big day for a number of athletes making their first Scotland appearances.

Stephen Mackay of Inverness Harriers was another of those, after waiting some years for this, and he duly took second place in the Match  place in a competitive 3000m race packed with Loughborough athletes.

Stephen clocked 8:33.73 and he was followed home by guests Freddie Carcas in fourth and Joe Arthur in eighth. GB Junior Jack Patton placed fifth in the Match element of that race.

It was an Inverness double for the 3000m races with Megan Keith our representative in the Women’s race. Megan had a key target of sub 9:30 for the Euro U20 qualifying time and she managed precisely that with 9:29.26 for fourth in the Match.

Greg Millar took third place in the Men’s javelin with 69.35m and Craig Charlton was fifth in the shot competition with 15.62m. Teddy Tchoudja threw a new PB of 13.91m