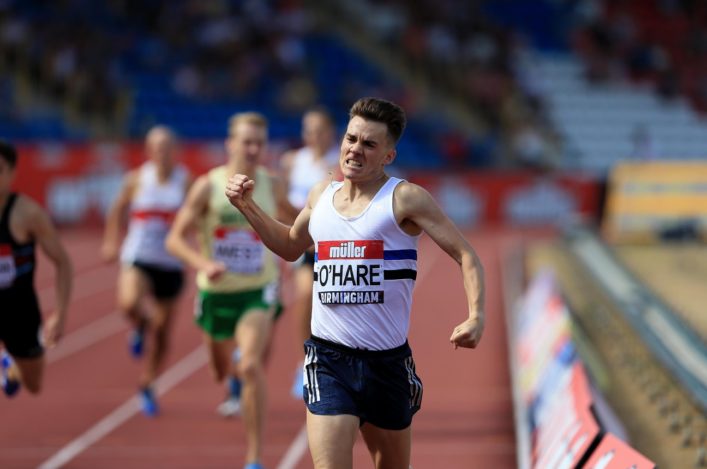 Chris O’Hare broke his own Scottish National Record at 1500m with a superb display in Monaco.

The American-based Scot battled all the way for his 3.32.11 time in ninth place in a race which once again lived up to the hype.

‘I am pretty happy with that and getting the Record,’ said Chris.

‘I only found out on Wednesday night that I was in the race – the plan was only to race on Sunday (Anniversary Games) so I’d done a session on Wednesday morning, which isn’t ideal.’

Many congratulations to Chris, his family, coach Terrence Mahon and all at Edinburgh AC and Tulsa University who were involved in his development over many years.

Jake Wightman, too, savoured another PB moment as he went under 3.34 for the first time and went to third on the Scottish all-time list with a run of 3.33.96.

In fact, it was a great battle between the pair throughout the race with Jake moving ahead by the bell before Chris re-asserted himself on the back straight with 250m to run and then gritting his teeth in the closing stages of a race that gone through 800m at 1.51 pace!

‘I am actually disappointed not to have made more of the opportunity,’ said Jake,

‘I went as hard as I could but I just died the last 200. I have had a cold this past week and I don’t know if that held me back but today I didn’t feel as fit as I believe I am.’

Herald column: Scottish 1500m running is at an all-time high

Earlier in the day, scottishathletics had highlighted the Herald column by Susan Egelstaff on the current crop of Scottish 1500m running and how we should ’embrace the current golden generation’.

The timing couldn’t have been more appropriate!

With thanks to Stuart Weir in Monaco