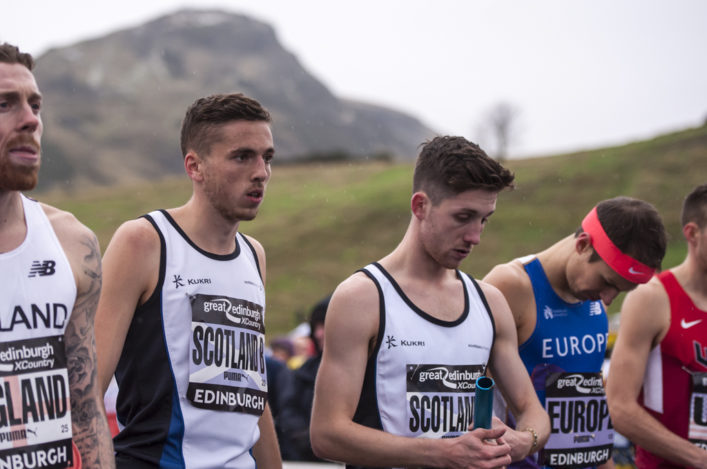 Neil Gourley (on left, with Cameron Boyek) raced International 4 x 1K Relay for Scotland a couple of years ago and he is in fine form in the United States

It was a busy weekend for Scottish athletes in various events – even away from the spotlight on Falkirk at the Lindsays Nartional XC  and the Emirates Arena for the Muller Grand Park.

Let’s start with a couple of high class performances in the United States and Conference title wins on the track for Neil Gourley and Josh Kerr.

Gourley, who raced for GB and NI over 1500m at the Euro U23s last summer, proved his speed over 800m with a 1.47.04 run in Clemson, South Carolina, that takes him to fourth on the Scottish indoor all-time list.

London 2017 representative Kerr, so impressive on the NCAA circuit last season, won the mile race in Albuquerque in 4.00.62. That equates to a sub-four mile time given the altitude in New Mexico and looks like good preparation for Josh for the NCAA indoors finals. 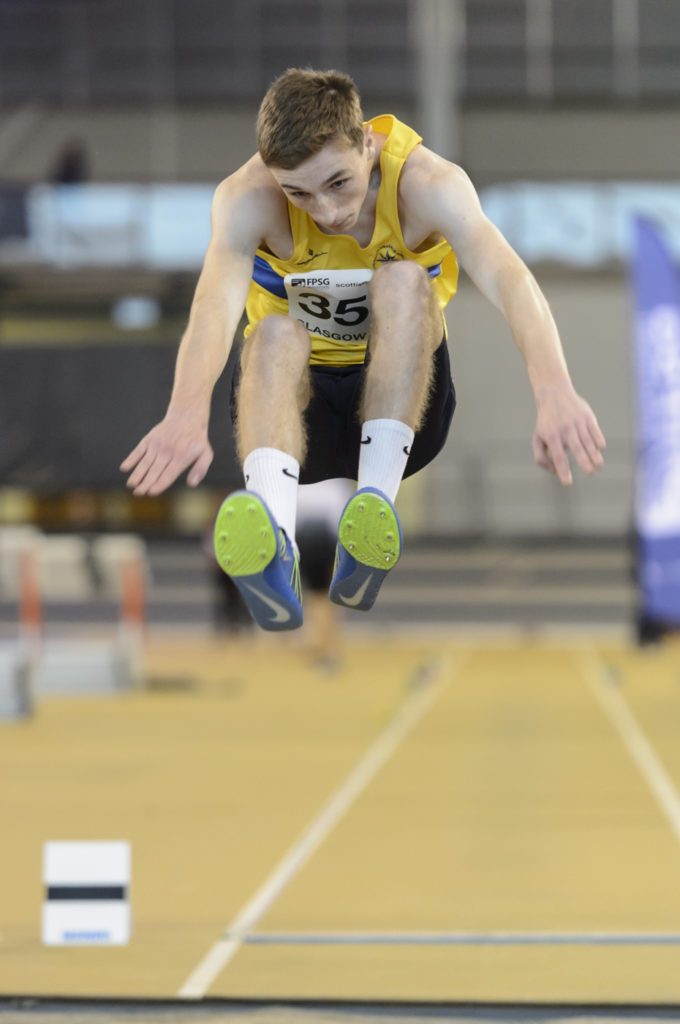 A small but strong group of young Scots headed for the greater competition of the England Athletics Age Group Champs in Sheffield – and there were some notable medal successes.

The U20 men’s long jump looks the highlight with a Scottish 1-2 for Alessandro Schenini of Giffnock and Henry Clarkson of Lasswade with 7.07 and 7.05 respectively. In that comp, there were fifth and sixth places for Robbie Farquhar and Joel MacFarlane, too.

Schenini’s Giffnock team-mate, Adam Clayton, took a silver medal in the U20 200m final as he recorded 21.75. That’s the seventh best on the all-time indoor list in that age-group.

Pitreavie pole vaulter Dylan Thomson cleared 4.60m and that was enough to give him a shared second place with fellow Scot, Andrew MacFarlane of Ross County, in fourth at 4.40m.

At U17 level, Scott Brindley of North Ayrshire was fourth in both the pole vault and long jump. But there was a Scottish 1-2 in the triple jump as Miraji Ahmed reached 14.-3 for gold with the silver headed for Bera Ajala of Edinburgh at 13.61m.

At U15, there was a bronze for Aidan Brindley in the pole vault with 3.31m and that is fourth on the all-time list indoors for that age group.

On the female side of the events, it was a terrific weekend for Giffnock North sprinter, Alyson Bell, as she claimed two golds at U15. Alyson won the 60m in 7.89 seconds and then took the 200m final with 25.45. There was a silver medal at U20 level for Olivia Vareille of Falkirk Vics in the 800m with a run of 2.11.3.

Well done to all the Scots who made the journey to Sheffield.

It is with great sadness that we have learned of the sudden and untimely passing of John de Courcy.

scottishathletics sends our condolences to John’s family and friends at this sad time. (Funeral details not yet announced)