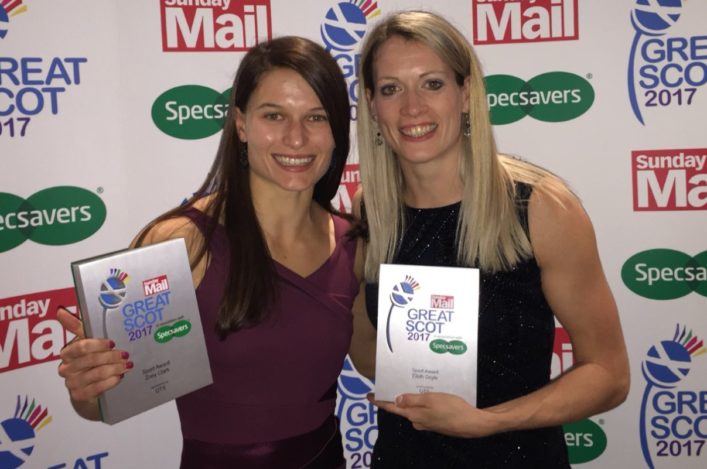 Zoey and Eilidh celebrate with their Great Scot Sport Award

Eilidh had been at Cumbernauld earlier in the day to present medals at the Lindsays National XC Relays and was joined by Zoey with the pair of course having helped GB and NI to a memorable moment in London in August.

The Great Scot Sports Award, sponsored by QTS, was for: ‘Someone who through their hard efforts and determination has achieved extraordinary sporting achievements and demonstrates tremendous dedication to their sport.’

Zoey tweeted her delight at the recognition.

There were a number of Scottish athletes in action at the Frankfurt marathon over the weekend – as Dewi Griffiths savoured a fine debut at the distance.

Central AC athlete, Fanni Gyurko, was arguably the best performance by a Scottish-based runner, as she came up with a  good PB of 2.39.48 (chip time). Scottish Half Marathon champion, Shettleston’s Fionnuala Ross, was at 2.48.44 with what was also a PB.

Inverclyde AC’s John Sharp clocked 2.30.25 and there was a PB performance from Edinburgh AC’s Stuart Johnston with a run of 2.39.25.

The 2.0949 run by Griffiths took him to the top of the British rankings for 2017 and just ahead of Callum Hawkins.

BC Athletics (@BC_Athletics) on Twitter (Scroll down link for photos).