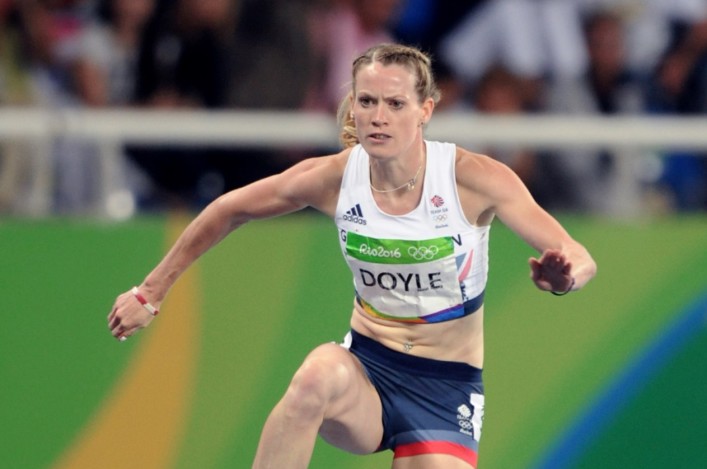 Eilidh Doyle finished eighth in the Women’s 400m Hurdles final in her second appearance at the Olympics.

The Scottish Record holder had been drawn in Lane One after finishing third in the semi-finals and making it through as one of two fastest losers.

Doyle’s hurdling was smooth but she didn’t quite get involved in the mix in a race that was to see a number of athletes hit PB and SB form as American Dalilah Muhammad took the gold. In the end, Eilidh came home eighth in 54.61 just behind Janieve Russell.

‘I honestly don’t know,’ said Eilidh afterwards. ‘My hurdling’s all good, and I look back on the race and think ‘what did I actually do wrong, I don’t know what I did wrong?’ because normally I can say something at that hurdle or that hurdle but there is no hurdle that I felt I hit wrong.

‘I just wasn’t in the race and I don’t know why. I said that if I could leave the track having given it everything Id be really happy  and I did but I’m not happy. I thought if I ran that way I’d be further up the field or run a PB.

‘The bends are very tight.  I feel that I’m a pretty good hurdler and I hurdle with my left leg which does help because you run that risk of trailing your leg. I feel like lane one might have had something to do with it but I don’t want to use it as an excuse or anything.

‘I was just tunnel vision. I was running my own race. I had no idea  who or what was there until I’d done with the last hurdle and at that point the race was over.

‘The times of those on the podium make me feel a bit better. If I’d looked up at the scoreboard and saw a 54 on the podium then I probably would have been gutted. 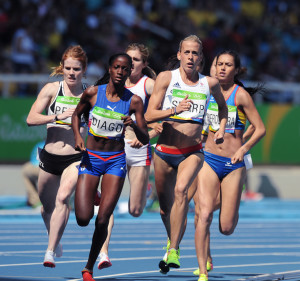 Lynsey Sharp has her first Olympic final to savour after a fine semi-final performance in Brazil.

The Scottish Record holder followed Caster Semenya through to take the second automatic qualifying place in the third of three semi-finals with a run of 1.58.65.

Sharp looked comfortable at that pace in a round where those to miss out on the final included Eunice Sum and Lynsey’s GB and NI team-mate, Shelayna Oskan-Clarke.

‘I’m more relieved – didn’t really believe it until I saw it up on the screen, so happy to get that one out of the way and I know I can be competitive in the final, but the hardest task was getting there.

‘I watched Charlie’s semi-final and I was just like ‘be patient’, run your own race, don’t panic and just be strong over the last 100 – that’s what (coach) Terrence Mahon told me to do – I felt really good I knew I had another gear.

‘There’s nothing to lose now. I’m there – there’s only going to be eight girls on the start line as opposed to the 12-14 that usually is and anything can happen – I definitely feel competitive and that felt pretty good.’ 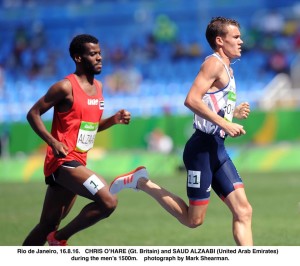 ‘It’s hard to come here like this and disappoint so brutally. My body just shut down on me. I felt great, even going into the last lap I felt great, 300 then 200 to go I still felt great, I felt better than I did in the heat, coming down the home straight, I was still within myself and then I went for that last gear and it wasn’t there and I tied up.’ 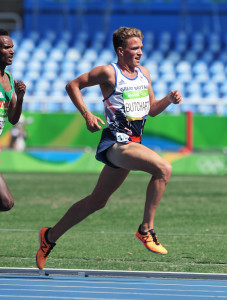 Andrew Butchart savoured the performance of his life to finish fifth in his Men’s 5000m heat and make the final alongside Mo Farah.

The Scot made sure the pace kept moving on in the second of the two heats on Wednesday and even led the race at the bell before settling for the fifth automatic place in 15.20.

‘‘It was hard work – it always is, I guess I knew I just had to make top five and I pushed for it and luckily I got it,’ said the Cental AC athlete who has had such an impressive 2016.

‘I actually expected a few people to come past – I didn’t kick that hard, didn’t go flat out – it was comfortable and somehow they stayed behind me. On the home straight I could see there was only five of us away so I kind of relaxed on the home straight which was nice.

‘It’s a totally new event for me – just the call procedures and so on and it is hard to adapt.
‘My training’s been going very well so I’m confident going into it anyway but, yeah, to get top five against that calibre of field then, Yes, I’m happy.’

Hammer throwers Mark Dry and Chris Bennett took to the Olympic circle on Wednesday but unfortunately neither progressed to the final.

Mark’s best was 71.03m on the day with Chris at 71.32m to leave both men disappointed. Well done to them both and their families and coaches, however, on representing GB and NI at the Olympics.

‘It felt alright, but it’s just a missed opportunity, I’m a bit annoyed at myself,’ said Chris.

‘The heat is just so warm out there, it’s about 36* and we don’t get much of that up in Glasgow so it’s been quite hard It’s been a brilliant experience but it’s a job not done in my eyes. I felt really good coming into today, training’s been really good and the throws felt technically alright today, there was just nothing there.  I’m very disappointed.’

With thanks to British Athletics for comments from athletes in Rio

Thanks to Mark Shearman for photographs