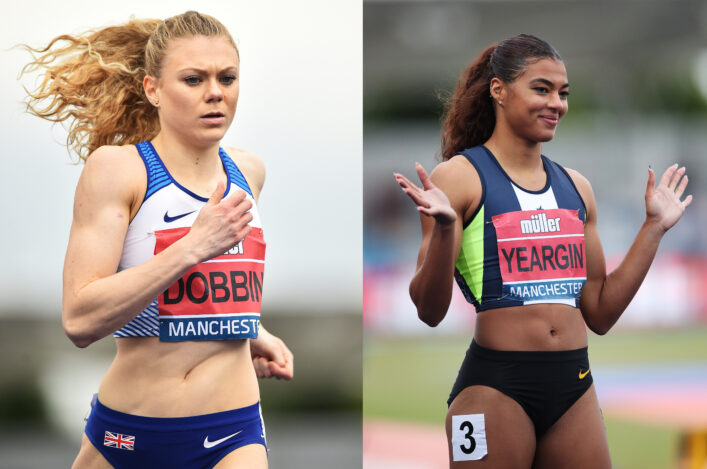 And Nicole Yeargin’s mum, Lynn, is also from the Fife town, albeit in a slightly different era.

There and then any similarities between these two Scottish sprinters begins and ends. The journeys they have undertaken to Tokyo 2020 are markedly different.

Yet their stories began to merge one weekend in Manchester at the end of last month when second place finishes in the Women’s 200m and Women’s 400m finals respectively booked their tickets to the Olympics with Team GB.

Beth’s dad Jim enjoyed a long career as a professional footballer, starting out at Celtic (with a couple of appearances on loan at Motherwell) before making a career in England’s lower divisions. He represented Scotland at the U18 Euro champs

It was runs with her Dunfermline-born dad which sparked her love for athletics and Dobbin has been raised with a strong work ethic required for a number of years when she worked various jobs before ultimately landing support from British Athletics.

‘My dad came down to Doncaster with another Scottish player [ex-Celtic and Partick Thistle] John Buckley, and dad got me a job selling the match programmes when I was 13. I’ve always been a grafter,’ said Dobbin.

She may speak with a broad Yorkshire accent but is fiercely proud of her Scottishness and said that her father was in tears when she phoned him with the news that she now held the national 200m record (during a breakthrough 2018 season).

‘My dad always brought us up Scottish. We weren’t allowed to support England at football, ‘they’re rubbish, Scotland’s your team’ he would tell us’,’ she said with a laugh.

‘My brother actually pretends he was born in Scotland. My mum is English and is like ‘eh I think I would remember if that was the case’. My grandparents are in Dunfermline and we were always up in  Scotland on holidays. I’ve seen a lot more of Scotland than I have of England.’

Beth has cleared significant hurdles in her sprints career, not least epilepsy.

‘I’ll always have epilepsy and it’s always in the back of my mind that I could have a seizure, but my chances are lower because I’ve gone so long without having one,’ she told the Yorkshire Post recently.

‘I still have to deal with the mental side of it like worrying about having a seizure. I do get quite a lot of flashbacks because it was at school in front of everyone when it happened and it was quite traumatic.

‘I think about it a lot less now, but there was a period in my early 20s when I was thinking about it constantly and having a lot of flashbacks and worrying about having another one.

‘Fortunately I’m in a lot better place now. I’m not saying I never think about it, but it’s a lot less than I used to.’

Now, three years on from that 2018 progress, after missing the Gold Coast Commonwealths, Beth has Japan in her sights after being named in both the individual 200m and the British 4x100m relay squad.

Nicole was raised on the west coast of the United States and when not trying out at ‘soccer’ and American football had aspirations to be a high jumper!

Her athletics story only really spans five years, having decided at 18 she wanted to ‘stay in shape’.

‘I joined the track team in my final year at high school,’ she recalled. ‘I just wanted to stay in shape, really, and was18 years old at the time.

‘I didn’t want to do track – I wanted to be a high jumper! So it is crazy to think where the journey has taken me over the past five years and now I am going to be an Olympian.

‘My family are all from Dunfermline and Edinburgh and my grandmother and uncle still live in Scotland. My mum, Lynn (Brock), grew up in Dunfermline but she move to the United States in her job with the Embassy.’

PB performances by Nicole this season have seen her threaten the top two on the all-time list, Allison Curbishley and Lee McConnell. Moving into athletics full-time is now very much the plan.

‘I want to be a professional athlete and do this day in, day out. I’ve fallen in love with sprinting.’