Rodger Harkins is looking forward to the Loughborough International as the next opportunity for athletes to prove their worth in Scotland vests.

The scottishathletics director of coaching was quietly satisfied with a number of performances in the Sainsbury’s Glasgow International at the Emirates Arena last weekend.

Against three nations with vast populations to draw from in GB and NI, France and Germany, Scotland managed one win, four second places and three thirds on a day when a number of athletes ‘performed when it counts’.

The Loughborough International in May is now the next chance to award vests and Harkins will of course monitor and assess performances between now and then – at the likes of the Senior Indoors this forthcoming Sunday (1 February at the Emirates Arena) and early in the outdoor season.

‘I guess the Loughborough International is the next chance for us to repeat something like what happened last weekend,’ said Rodger.

‘It is early season, a bit like the Indoor International, and our Scotland selection tends to fragment a wee bit via Loughborough Unis, British Unis and hopefully GB U20s.

‘But I would like to think a few of those involved at the weekend will very much in our thoughts for Loughborough. With more events covered, it is a bigger team as well and we look forward to that.

I was pleased with the overall performance by our team in the Glasgow International against three countries with a very significant population advantage! It was about people trying to step-up a level and perform on the day and I think we got a good response.

‘I think it has been noted that it was quite a youthful team with a number of athletes who don’t have a great deal of international experience – probably with the exceptions of those who were at the Commonwealth Games.

‘That’s why the fixture was attractive to us in many ways – because we could push people in against GB and NI, France and Germany and let them learn from it.

‘I felt we saw that with one first place, four second places and three thirds. In that level of competition, that was decent and we amassed 35 points over the 16 events. There were also indoor PB performances from four of the athletes involved (Sam Adams, Myles Edwards, Cameron Tindle, Kirsten McAslan) in the 14 individual events and that was a decent percentage. 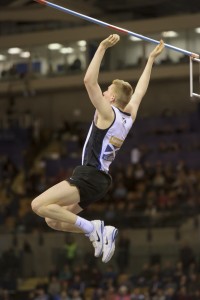 ‘Cameron Tindle had earned his 60m place the week before by winning at the National open and, under all the circumstances, he could be well-satisfied with his performance. He kept his nerve well in a tricky situation and then came up with a PB.

‘Kelsey Stewart was given the anchor leg in the 4 x 400m and she revelled in that with a fine run. The 4 x 400m Women were pleased with second place behind a strong GB team and rightly so because they’ve beaten the French and the Germans in an international context. Last year, the Women beat the United States so there is plenty to be positive about in terms of the relays.

‘The two youngsters were there on merit. We didn’t pick them because they were teenagers – but because they deserved it.

Harkins paid tribute to a large crowd inside the Emirates with not too many empty seats as those who turned up created a wonderful, positive vibe.

‘I really want to thank the Scottish crowd, they were terrific on the day,’ he said.

‘I thought the atmosphere was brilliant inside the Emirates  and there has been some good feed-back. The public were very enthusiastic and I loved the way they engaged with the Scotland team – I’ve no doubt that helps the team and urged people to better performances.

‘It certainly felt as if there were people there who knew these athletes from club level and from our national events and that kind of rapport can only be a good thing for the sport in Scotland; if we encourage people, it can help make them better.

‘With club relays taking place throughout the day, as well, then there was very much a feeling of inclusion and that’s what athletics in Scotland has to be all about: everybody working together and pulling in the right direction.’ 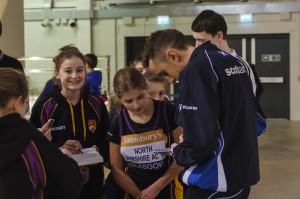 Rapport: there was a real bond between the Scotland team and the fans at the Emirates – photo by Bobby Gavin