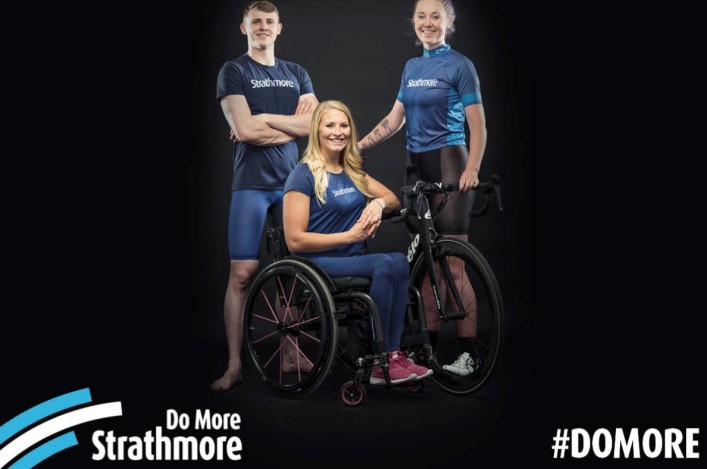 With the countdown well underway until Rio 2016 kicks off next month, Strathmore Water has unveiled three of Scotland’s most recognisable and respected medal contenders as the new Team Strathmore brand ambassadors.

Strathmore Water – the water at the heart of Scottish sport – has teamed up with swimmer Ross Murdoch, track cyclist Katie Archibald and T53 wheelchair racer Samantha Kinghorn to inspire and motivate Scots to get involved in swimming, running and cycling.

While the nation gears up for a summer of sport, with the Olympics and Paralympics taking place from early August, ‘Team Strathmore’ will harness our love of sport and show how people of any age and ability can get involved and Do More.

Working with a number of sporting partners and events, including scottishathletics and Scottish Swimming, Strathmore will deliver a year-long campaign which will include inspiration, tips and techniques for all levels, not to mention some once-in-a-lifetime opportunities for Scots to get involved!

Joining this year’s Team Strathmore are:

Samantha Kinghorn (20), from Dumfries & Galloway, is a T53 wheelchair racer and competed at Glasgow 2014 Commonwealth Games – finishing fifth in the 1500m. She holds three gold medals from the IPC European Championships, winning in the 100m, 400m and 800m.

Ross Murdoch (22), from Balloch, famously won gold in the 200m breast-stroke at Glasgow 2014 Commonwealth Games and was part of the Great Britain squad that won gold in the mixed 4 x 100 metre medley relay at the 2015 World Aquatics Championships. Earlier this
year, Ross added to his medal haul with a gold medal at the European Championships.

Katie Archibald (22), from Glasgow, is a former world and European champion (2014) in women’s team pursuit as part of the Great Britain team, and the reigning European individual pursuit and elimination race champion. 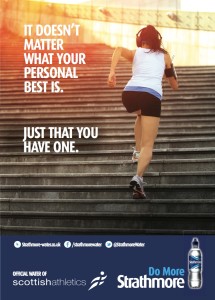 Adrian Troy, head of marketing for AG Barr said: ‘Strathmore has a proud history of supporting sport in Scotland, and we are thrilled to announce this new partnership with three of the country’s top athletes and key medal hopefuls for this year’s 2016 Olympic Games in Rio.

‘We first launched the Do More campaign with our Commonwealth Games Ambassadors in 2014, and we look forward to building on that success with Ross, Katie and Samantha.

‘Together we hope to show Scots how it’s both easy and good for you to get involved in swimming, cycling and running.’

strathmore are in partnership with scottishathletics, supplying water for a series of our track and field events, including the Indoor Season at the Emirares Arena in Glasgow and the forthcoming Seniors and Age Groups at Grangemouth.