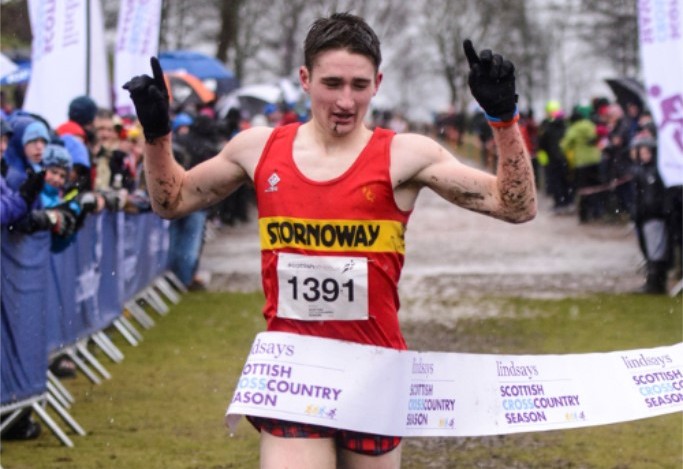 VIDEO footage of all races at Callendar Park

RESULTS from Callendar Park are online on our Events section page

Stornoway RAC athletes went for a training run close to Stirling Castle on Saturday afternoon en route to the National XC and then declared on Twitter they were ready for ‘battles ahead’ at Falkirk.

And how! The club from the Western Isles duly took the U17 men’s race by storm with gold for Connor Maclean, bronze for Euan Campbell and team silvers in what was a 17-strong ‘raiding party’ across the age groups.

Maclean had been strongly fancied for the U17 title following recent great form at the Great Edinburgh XC and when wearing a Scotland vest in Ireland at the Celtic XC event.

His predecessor as U17 champion, Inverclyde AC’s Jonny Glen, moved up to U20 level and made it two golds in a row – as he medalled at Callendar Park for the fourth successive year.

Kathryn Gillespie won the U20 title and then eyed the European Juniors on the track this summer while there were some familiar names among the other age-group champions like Laura Stark (Kilbarchan AAC) at U17; Adam Scott (Fife AC) and Erin Wallace (Giffnock North AAC) at U15 and Hamish Armitt (Giffnock North AAC) and Emma Frew (Ayr Seaforth) at U13.

But let’s start with Stornoway with coach Ross Munro understandably delighted with team silver medals as Michael MacMillan and Hugh McKenzie backed up medallists MacLean and Campbell. It was the club’s first team medals at the National XC since being formed in 1985.

‘It is about have a good squad and working hard,’ he said.

‘We have done that throughout the winter. Connor has been in great form and we’re delighted he is a national champion. He deserves because he is a dedicated trainer. Euan lives in Belgium but his family are from the Western Isles and he’s been up there training with us on occasion.’

Maclean and MacMillan are chasing track times which could win them college places in America – with Connor set to move across the Atlantic next January.

‘They can take the challenge on and see what they can do it with it,’ added Ross.

‘It is hard to say they are going to do X,Y,or Z but there is no reason why they cannot set their targets high. You look at someone like Chris O’Hare who has done so well in America and say why can’t the same happen to those with some talent and plenty of hard work.’ 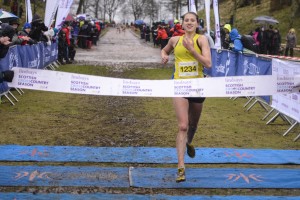 Kathryn Gillespie: won at Falkirk as U13 and now U20

Gillespie for her part will head to Birmingham with a World Cross place with GB Junior Women a possibility – and the European U20s on the track at 1500m a definite target.

‘It was really good – I enjoyed it,’ smiled Kathyrn.

‘I am headed for the Inter-Counties now and then look towards the track. I am looking for the qualifying times for the European U20 in the 1500m. To get to that this summer with GB would be really nice.

‘There was a big improvement last summer when I ran 4.18. It had felt as if I had stagnated a little bit so I wanted to see one of the PBs improve and that happened. That time is inside the qualifying standard for the European U20s but hopefully I can bring that down a bit more and get selection.

‘But it is Birmingham first. I have had a couple of howlers there in the past and I was just a bit off from where I wanted to be in Liverpool.’ 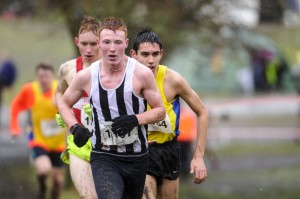 Glen won the U20 race from Central AC’s Aidan Thompson after a great battle across 8k and Euan Gillham (Kilbarchan AAC) picked up one of the most deserving medals of the day when he recovered from falling early in the race to fight back from about 1o-12th place to claim third on the finishing straight from Ryan Thomson (Ron Hill Cambuslang).

Stark, a Scotland international in hill running and cross country and a first year U17, beat Gillian Black (VP-Glasgow) and Kirstin Oakley (Ayr Seaforth) for U17 gold – and she was high-up among the U20 athletes, too, in that combined race.

Adam Scott won the U15 race from Freddie Carcas of Edinburgh AC and Ryan Gray of Inverclyde AC. Freddie’s brother, Alex, split the Stornoway pair to also take a silver at U17 level.

Erin Wallace of Giffnock North was an impressive U15 champion to continue her dominance in that age group across various cross country races and indoor events with silver for Naomi Lang of Aberdeen AAC and bronze to Central’s Kate Gallagher.

Here are the team prize-lists: 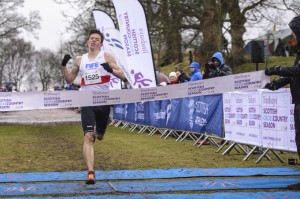