Four medals is best haul since 1990

Scotland finished in 8th place in the athletics ‘points table’ for the Commonwealth Games.

Points are awarded for top eight finishes with eight for a gold medallist down to one for an 8th place finish.

England were the top nation in track, field and marathon with Australia in second place and Kenya in third.

Scotland amassed 73 points with no fewer than 22 athletes contributing to that tally – 18 individuals and our 4 x 400m men’s team, who finished fifth.

The points total for Delhi four years ago was 54 and the Glasgow 2014 record of four medallists is the best in those terms since five were won by Scotland in Auckland in 1994.

Libby Clegg took gold in the T12 100m, Mark Dry won a bronze in the men’s hammer and of course Eilidh Child and Lynsey Sharp each won a silver on successive nights amid stirring scenes at Hampden.

Clegg, aided by guide runner Mikail Huggins, won her race in a world lead for Scotland’s first gold in track and field for 20 years with Dry’s the first medal in field events for the same duration. 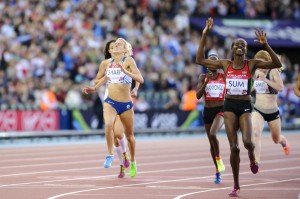 Lynsey crosses the line at Hampden

The Team Scotland athletes who contributed to the points tally and their Top Eight place were as follows:

Scotland were 10th in the points table of nations in athletics in Delhi four years ago.

Here’s the points table position for the past 20 years.

We will have more analysis and comment in due course over the coming days but all at scottishathletics would like to acknowledge the efforts of our athletes, coaches and clubs for the Commonwealth Games.

And thanks, also, to the Scottish athletics community for their outstanding support.