Lynsey Sharp’s incredible silver medal story at the Commonwealth Games has landed the Scottish athlete a couple of top awards as 2014 draws towards a close.

The 24-year-old’s Hampden run in the 800m hours after attending the medical clinic at the Glasgow 2014 Athletes Village featured in a special BBC documentary screened three days before Christmas.

But none of Lynsey’s success in a memorable year – she took silver at the European Champs as she set a Scottish 800m National Record – has surprised one of her former next door neighbours when she grew up in Edinburgh.

Scotland rugby legend Chris Paterson detected even then the characteristic determination which runs through the Sharp family and has told the current edition of PB of his admiration for the athlete.

Lynsey collected ‘Commonwealth Athlete of the Year’ title from scottishathletics and the ‘Inspirational Performance of the Year’ accolade at the sportscotland/Sunday Mail awards last week.

Now thoughts are already turning towards Rio and the next Olympics with British Athletics having elevated Lynsey to ‘Podium’ on their World Class Performance Programme funding list.

‘We were next door neighbours for a couple of years maybe about eight years ago or so,’ said Scotland rugby record points scorer Paterson, who now has a role with the SRU.

‘I wouldn’t claim any direct influence at all on Lynsey’s career but I have certainly been watching out for her performances over the years and it has been great to see the progress she has made. This past year has of course been pretty spectacular.

‘What I do remember around that time was a teenager who was really committed to going training two or three times a week after school.

‘At that stage, the Sharps were training in Dundee with Liz McColgan’s group and that meant a huge effort on Carol’s part in taking them to and from sessions.

I would come in from my work as a professional rugby player and see Lynsey making a big commitment to training while also trying to balance school-work and so on.

‘So the determination to improve is one of the things I do remember about Lynsey around that time.

‘Teenagers will look up to role models in sport and in that regard I think it is important for those models to be normal, down-to-earth people.’ 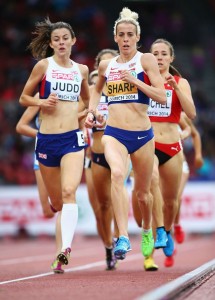 So, while Paterson is keen to make sure he’s not credited with any direct influence on Lynsey’s career, maybe living next door to a highly-regarded professional sportsman did rub off a little.

‘Sometimes, the lifestyles of your role models can seem unattainable or so far removed from what we see as normality,’ he told PB magazine.

‘I think a bigger influencing factor is when you realise the person you are looking up to does the same every-day life things as you.

‘Gregor Townsend was a role model for me in rugby and we went to the same school together. He was in his last year when I was in first year as an impressionable youngster.

‘If living next door to a professional sportsman helped Lynsey in some way to recognise that normality aspect then I am happy that’s happened.

‘Athletics is an individual sport and I don’t envy them being out there on the track for an 800m and everything coming down to just two minutes of running.

‘There’s no hiding place. In rugby we’ve 80 minutes, we’ve a referee, we’ve 14 team mates and we’ve substitutions that can take place; we have different pitches, different conditions – so there are loads of factors at play in terms of your performance.

‘I always think it is different for the athletes, boxers and golfers in terms of being out there on their own, although I know they have a lot of back-up from coaches and family.

‘Lynsey is operating now at a very high level and I’ve nothing but admiration for the way she has progressed and indeed revelled in that. I think the next few years look exciting for her.’