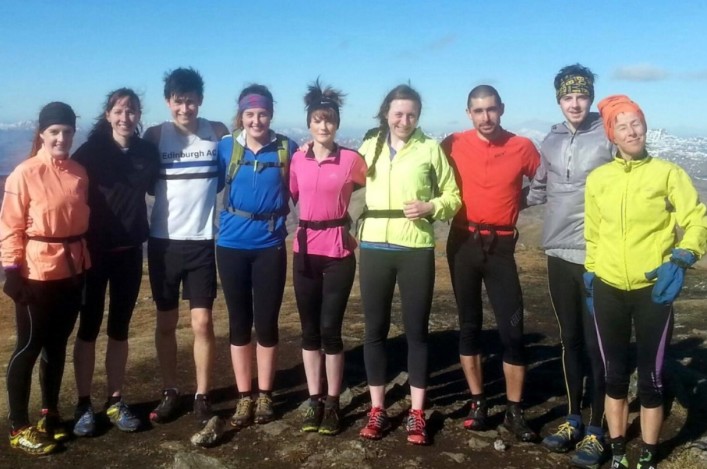 Scotland’s top hill runners gathered last weekend for a pre-season training camp – with 21 athletes and some of their coaches involved.

The Trossachs Tryst hostel on the outskirts of Callander proved the ideal location.

Designed to bring together existing or aspiring international hill runners, at both junior and senior level, the camp was deliberately timed to take place a short time before the international season begins.

The residential event consisted of a mix of running sessions and keynote presentations, with a group meal and informal discussions late into Saturday evening.

The formal running programme began with a testing hill repetition session which saw the athletes eventually reach the summit of Ben Gullipen which, at 415m, dominates the skyline to the south of the hostel.

Emma Kinrade’s presentation focused on the key role of nutrition in any athlete’s quest for high performance and maximizing their potential.

Arguably the highlight of the weekend was an inspirational talk on the specific demands of uphill only races. Angela Mudge is as qualified as any athlete to address this topic, given that she reached the pinnacle of her own illustrious hill-running career in the summer of 2000 when she became World Champion in an uphill race in Bergen, Germany. 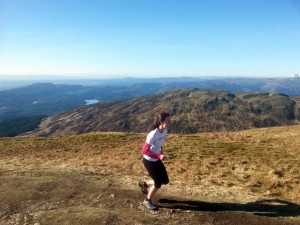 The weekend was then rounded off with coach and camp organiser Malcolm Patterson’s short talk on planning and peaking, leading naturally on to a summary of the international opportunities for hill-runners in 2016 at both Scottish and GB levels.

Full details of these internationals and the team selection policies will be available shortly in the hill-running section of the 2016 International Handbook.

The frst major event for Juniors will be the Scottish championship at Ben Lomond on May 7, whilst for Seniors it  will be the Inter Counties race in North Wales on May 14 (where places in district teams are up for grabs: hill-running districts being North, Central, West and East).

*Emma Kinrade is both a hillrunner and a sports nutrition expert. She holds the IOC Diploma in Sports Nutrition, and is Lecturer in Dietetics at Glasgow Caledonian University. Her club, Bellahouston Road Runners, often defy their name to perform with distinction on the hills!

*Angela Mudge, is Scotland and GB’s most successful female mountain runner. On the international stage she won the Women’s World Mountain Running Trophy in 2000 (on an uphill course),and ran in many other World and European international races (including 3 x 2nd at European championships, and a 2nd at the Worlds in 2003, and a win and course record at Sierre-Zinal). Domestically, she won the British Fell Running Championship five times and the Scottish Championships three times.