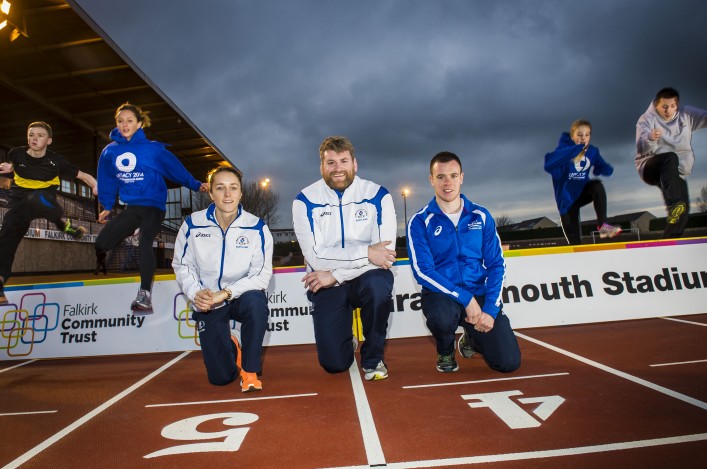 sportscotland and Falkirk Community Trust have teamed up to provide a lasting legacy from the Glasgow Commonwealth Games that can inspire future generations of stars.

As part of sportscotland’s and Glasgow 2014’s initiative to distribute sports equipment used at Glasgow 2014 to clubs and local authorities across the country, Grangemouth Stadium and Crownpoint in the East End of Glasgow successfully applied for the running tracks at Hampden Park and Lesser Hampden Park.

Falkirk Council supported the bid, providing over £500,000 to see the project come to fruition.

Team Scotland athletes Jade Nimmo, Andy Frost and Grant Plenderleith were also in attendance and were accompanied by young, local athletes from Falkirk Vics and Falkirk Flyers for the official opening. 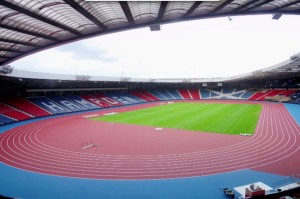 Stewart Harris, Chief Executive of sportscotland, said: ‘Glasgow 2014 provided sportscotland with a fantastic opportunity to accelerate our plans to develop a world-class sporting system at all levels, which we have seized.

‘By working with Glasgow 2014 to distribute sports equipment throughout Scotland, we are providing a real sporting legacy from the Games.

‘It is tremendous news for performance athletes and members of the local communities in and around the Falkirk and Grangemouth area that such an important piece of Glasgow 2014’s equipment legacy is now at Grangemouth Stadium.

‘The track from Hampden and the additional athletics equipment going to Falkirk Community Trust can inspire future Team Scotland athletes to emulate our recent success on the global stage.’

Jamie Hepburn, Minister designate for Sport and Health Improvement, said: ‘The opening of this fantastic track is a demonstration of the continuing legacy of the Commonwealth Games that will help build a more active and healthier Scotland.

‘It’s great that young people can now train and compete on the very same track where Eilidh Child, Usain Bolt and many others won medals.  The Grangemouth Stadium is already extensively used as a training hub for Scottish internationalists and club runners and I am confident the new track will attract more athletes.’

Falkirk Council Leader Craig Martin said: ‘The Games were a massive success for Glasgow and as part of the legacy programme we are really fortunate to be able to benefit from this amazing gesture.

‘It means that athletes across the area can train using the best and most modern equipment on a state of the art track to further develop their skills.’

Ian Scott, Chairman of Falkirk Community Trust, said: ‘We are delighted to see the track open for use here at Grangemouth Stadium. This is truly an excellent legacy for Falkirk athletes and will hopefully be instrumental in inspiring future Commonwealth athletes to compete at an international level.’

The Trust worked with a range of organisations to secure the new athletics track as part of the legacy from the Glasgow Commonwealth Games 2014, ensuring that athletes across the country continue to benefit on a long term basis from the Commonwealth Games.

Grangemouth Stadium and Crownpoint in Glasgow were successful in their applications to receive 50% each of the available track material from Hampden Park and Lesser Hampden. Grangemouth Stadium was also the grateful recipient of £50k worth of weights equipment and a further £90,000 worth of athletics equipment.

Grangemouth Stadium is one of the busiest training centres in the country, with the UK’s first purpose-built Indoor Athletics Academy allowing year round training for multiple sports as well as strength and conditioning training. 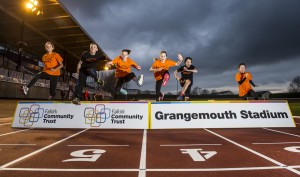