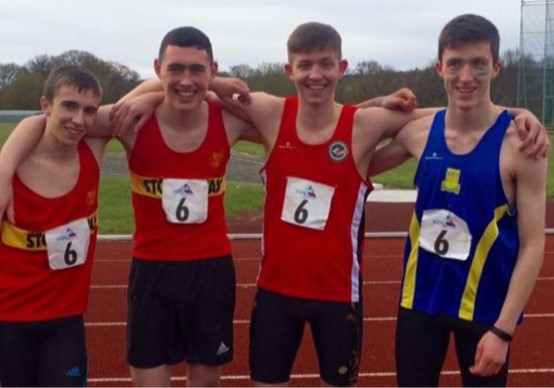 Men’s U17 Relay team from the newly-created Island Select

Last Sunday was an historic day in island athletics as young athletes from the Western Isles and Orkney and Shetland joined forces in a new composite Island Select team.

For the first time, the Island Select took part in the UK Athletics eight-strong North East division of the Youth Development League in Dundee.

Facing the likes of Inverness Harriers and Aberdeen AAC, the Islanders got off to a flier and were leading the U13 and U15 competition after 10 of the 50 scheduled events! The U17 team were also in great form, with all athletes performing well.

As the day unfolded the Inverness Harriers drew level and then went in to slim lead at the half way stage, but the Island Select team continued to  compete well and it really was nip and tuck with the new U13 and U15 team finishing a fantastic second place with 557 points to the Harriers 598. Aberdeen AAC were third a further 109 points back.

For the U17s, it was an even better outcome as they took top spot with 233 points ahead of Inverness in second with 209 and Aberdeen in third with 171.

The 50 strong Island Select squad were drawn from the best young athletes at the Stornoway, North Uist, South Uist & Eriskay, and Orkney and Shetland athletics clubs.

Stornoway RAC coach, Seumas Mactaggart,came up with the idea after seeing how many youngsters were making the grade as part of the Island Games set-up in Jersey last year. Seamas was team manager for the new squad.

‘It was really impressive to see how many 15 and 16 year olds from the islands were involved in Jersey, and I knew of many of the other youngsters who were coming through in the Western Isles,’ he explained.

‘So at the start of the year I spoke to the coaches in Shetland and Orkney, and they really liked the concept, and that’s how it all started.

‘It was amazing to just be there at the YDL League meeting with the team being a reality. And the debut proved beyond our wildest dreams !

‘We knew we could compete with the best, but the kids really stepped up to the plate with PBs happening all day. It was a great atmosphere, and you could see them all growing in confidence and feeding off that in a fun, but focussed kind of way, and they all gave each other great support.

‘I frimly believe this kind of incentive is just what our young sporting talent needs – it really brings out the best in them.’

With the next match in Inverness in three weeks, the Island Select squad know they’ve set the bar high, but are confident that this is just the start of a truly exciting new chapter.

With thanks to Seamas Mactaggart

RT @RunsWritesCode: As a “new runner” I was nervous joining @FifeAC 14 years ago. First session was hill reps at St Andrews harbour 🤣 but e…