Great lineup for the Diamond League 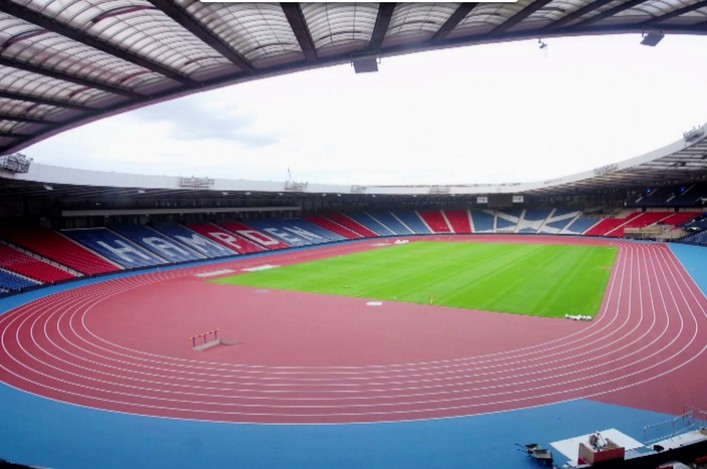 A brilliant opportunity for the Scottish sporting public to witness top class athletics – and a chance for some Team Scotland members to give Hampden a ‘trial run’.

The prospect of a Sainsbury’s Diamond League fixture in Glasgow was first mooted some 12 months ago around the time of the Anniversary Games.

A suitable venue was being sought with London’s Olympic Stadium no longer available and Hampden, once it had undergone its transformation, fitted the bill.

Now a host of global medallists, as well as a number of our own elite athletes, will grace the stadium this weekend – with a very exciting series of events lined up.

Mo Farah’s unfortunate absence following illness notwithstanding, the calibre of athletes on show is exemplified via the likes of David Rudisha, Shelly-Ann Fraser-Pryce, Yohan Blake, Ashton Eaton and Greg Rutherford.

‘We always knew that 2014 was going to be a special year for our sport and the Sainsbury’s Grand Prix has given added even more gloss,’ said Nigel Holl, chief executive of scottishathletics.

‘The year started in January with a full team Scotland involved in the Glasgow International at the Emirates Arena and now, with the Commonwealth Games right on the horizon, the temperature is rising.

‘This really is a one-off for athletics in Scotland. It is Hampden ‘reverting’ to an athletics stadium because there were some very significant meetings in the past – a number of years ago now, however.

‘We’ve Scottish athletes competing this weekend but we should stress that the Games that follow have been planned for a number of years and is very much the focus. The Diamond League is a bonus – but a very good one at that.’

Chris O’Hare said: ‘I missed the British Champs and that was a tough one but training has been going well since then. I am really excited about Saturday’s race.

Eilidh Child said: ‘It is a great opportunity for us to see what things are like at Hampden prior to the Games. Even things like where the warm-up track is, the call room and so on can all be helpful for you in preparing.

‘I can’t wait to experience a Hampden crowd for athletics – that should be great.’

Eilish McColgan: ‘It will be all new and my brothers and sister are going to be in the stands to watch me for the first time. I’ve only been here once for a press call for the track transformation and it was quite impressive then.’

Read the Athletics Weekly preview which includes a guide to the events.