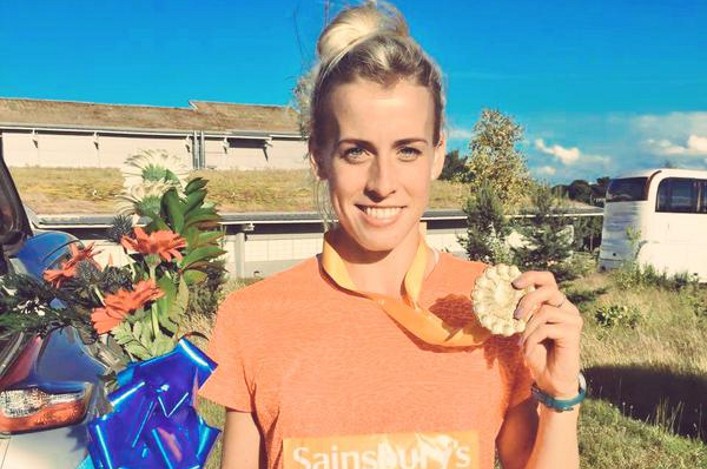 There were five gold medals for Scottish women on the track at the British Athletics Championships in Birmingham this weekend, with Beijing berths for several athletes on the back of those winning performances. The golds make it a clean sweep for Scottish women in every distance from 800m upwards for 2015.

In a stand-out performance on ‘Super Sunday,’ Laura Muir took a bold and decisive lead early in the 1500m final to take the title in a time of 4:10.37. After a race which secured her place at the World Championships, she said: “I knew that I would be only happy with winning and it’s my first British outdoor title.
“It’s only my third time competing here – I was last the first time and second last year so the win was really important today. I was confident but I know Laura [Weightman] is really strong so I couldn’t let my guard down. I want to be pushing the best of Britain and the best in the world.”

Also topping the podium was Eilidh Child thanks to a comfortable win in 55:57 in the 400m hurdles. She said: “I knew it wasn’t great conditions with the wind, so I thought if I can just execute a good solid, smooth stride pattern, I should come away with a victory. I feel there’s a good time in there and hopefully I can drop somewhere close to my PB, if not a PB sometime soon.”
Now set for the World Champs, she added: “Beijing is going to be tough – there were some really good times in Paris [at the IAAF Diamond League] from the girls in the hurdles, so it’s certainly going to be a hard champs. If I can just go there and contend without feeling I could have run faster or better, then whatever the result I know I’ve given it everything and hopefully I’ll be happy.”

There was a Scottish 1-2 in the women’s 5000m as Steph Twell took first place in 15:38.01, ahead of Laura Whittle who won silver in 15:41.13. A clearly-thrilled Steph said: “It was really tough in the rain but I’m a cross-country runner so that’s good preparation for races like this. I just smiled – I danced on the start-line and I enjoyed it. I’m over the moon, it’s a step closer to gaining selection for the World Championships.
“It was a very competitive field so I had to be patient and then I put my foot down at the end. The crowd really got behind us, I was really grateful for their support. I had three training partners in the race with me, which was great.”

Lynsey Sharp, (pictured), took her third 800m title and a World Champs spot in 2:02.40, saying: “I was really up for this weekend – I just wanted to get competing again. So happy to confirm my place on the [World Champs] team, I missed it in 2013 so I’m looking forward to it.
“The race in Paris showed that you are going to have to run 1:57 to reach the final so it’s all about getting some good races in and peaking for the World Championships. I’m in better shape that I was last year when I got my personal best.”

Also going home with gold was Lennie Waite, who took an early lead in the 3000m steeplechase and held on to win in 10:15.04. She said: “It feels good, it was the main purpose of coming here so I’m happy with that.”

Chris O’Hare emerged with the silver medal from a scrappy 1500m final, which saw Jake Wightman just edged out into fourth place in the final straight. Chris, who finished in 3:51.03, said: “It was good – I think I’d describe it as good enough. The job was just to compete well and get the top two placing.
“In the last few hundred metres, I didn’t have the top gear but that’s from not racing recently – I think it’s been a big blessing in disguise, though – it forced me to go into strength work. It’s easy to get caught up in speed-work in the summer. I’m confident I can get the time I need.”

The men’s hammer throw saw a medal double for Scots – Mark Dry took silver with a throw of 73.02, and Chris Bennett the bronze with 72.62. Mark said: “It’s pretty frustrating because I was feeling good today but Nick (Miller) threw really well. 73 plus was good today but I need another throw over 76m to confirm my place in Beijing and I’ve got a few opportunities to get those marks. I’d have rather sealed the deal here today but I overtook (Chris) Bennett in the final round so that was good!”

Kirsty Law also medalled in the discus, earning bronze with her 52.15 throw. Susan McKelvie took bronze in the hammer with a throw of 61.30, and in the pole vault, Jax Thoirs secured a podium place with his bronze medal-winning jump of 5.20.

Photo: Thanks to Lynsey Sharp on Twitter for the image.