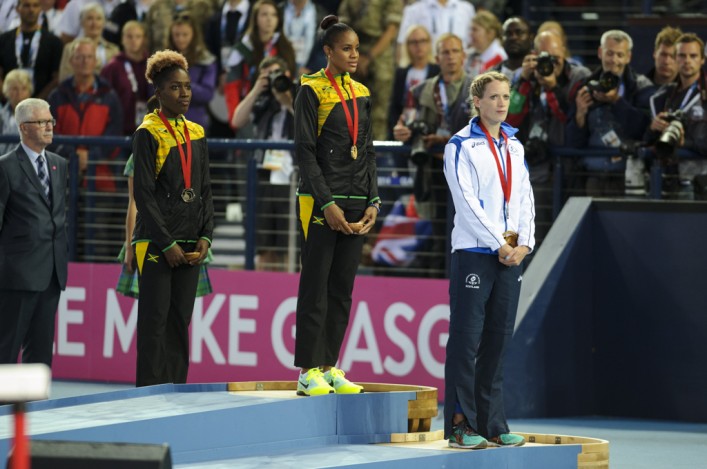 Silver lining for Eilidh at Hampden

Eilidh Child claimed silver at the Commonwealth Games for the second time and savoured the love of the Hampden crowd.

It was a third track and field medal for Team Scotland, the best tally at a Games since five were won in Auckland in 1990.

Child lost out on gold to Jamaican Kaliese Spencer, the pre-race favourite, but was more than content with second place after taking on a huge burden of expectation as one of the poster girls of the Games.

‘I will cherish this silver medal because I’m happy with the way I performed,’ said Eilidh.

‘It wasn’t the fastest race I’ve run but there was a lot of expectation and I’ve coped with that. I always said I can’t control what other people can do – that’s the reality in sport.

‘I tried to shut out the crowd a bit beforehand and concentrate on what I had to do. Afterwards it was amazing and the lap of honour was something very special.’

The silver came after a sixth place finish, and best of British placing, for Guy Learmonth in the 800m final – where Nijel Amos shocked David Rudisha to claim gold.

Learmonth recorded a PB of 1.46.69 and a late surge took him to sixth in a field of nine men, with British champion Michael Rimmer edged out by the Scot.

Guy said: ‘It has been a great learning curve for me. I have held my own in some very good company and proved I can compete at this level.

‘I’m thrilled to have represented Scotland at Hampden and I want to thank family, coaches and friends for all the support over the years. I believe I can get faster and this can be a platform for me.’

There were fifth and seventh place finishes in the T54 1500m final for Sammi Kinghorn and Meggan Dawson-Farrell respectively.

Sammi said: ‘I was ranked sixth on times and finished fifth so I’m delighted with that – I’ve beaten someone who was faster than me. The crowd was absolutely amazing and it has been wonderful being part of Team Scotland at a Commonwealth Games.

‘I tried so hard to get fourth but there was nothing left in the tank by then. But they cheered me anyway – thanks!’

Meggan said:  ‘It was just like Grangemouth on a wet training night – apart from 44,000 people bawling their heads off! The crowd pulled me along a bit and it helped.

‘I didn’t look to see where I was ranked in terms of the times – I knew I would not win and I knew I wouldn’t be last so I am happy with seventh. The Games has been a wonderful experience.’

In the 800m semis, there was relief for Lynsey Sharp at progress to the final with 2.02.28 but Emily Dudgeon was pipped late in the second race to agonisingly miss out on an automatic place.

Angus McInroy was ranked at 12th for the discus final and that’s where he finished with 54.12m his best in the opening three throws.

Kirsty Law finished eighth in discus qualifying and is through to Friday’s final.

Inverness Harriers athlete Kirsty threw 54.68m with her second throw and said: ‘That was pretty amazing because Eilidh’s race was happening right next to me just before we competed. Then they put on The Proclaimers and I was loving it. I’m delighted to be in the Commonwealth final and anything can happen.’