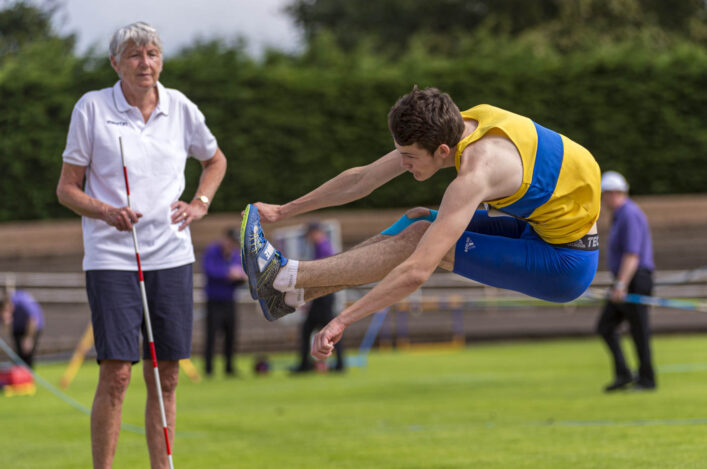 The FPSG Age Groups defied doom-laden weather forecasts on Saturday to offer up a host of fine performances on a positive day for the sport at Grangemouth.

With athletes representing clubs from right across Scotland – and beyond – the competition was fierce and that helped deliver a clutch of Scottish Age Group Records and Championship Best Performances as well as PB and SB performances.

Giffnock North club-mates Alessandro Schenini and Murray Fotheringham were in record-breaking form in an excellent U20 long jump competition which caught the attention early on Saturday.

Once again we’d like to express our thanks to the scottishathletics Officials and the staff at Grangemouth, and Falkirk Community Trust, for helping to make events happen.

European U20 finalist Schenini leapt to 7.53m to come up with a Championship Best Performance that improved the 7.47m mark set a few years ago by James McLachlan.

Fotheringham for his part took the U17 Scottish Record by a single centimetre as he went out to 7.21m – with Hugh Davidson’s 7.20m best having been set way back in 1980.

‘I’m really pleased with a CBP performance today and it sets me up well for the Manchester International and for the FPSG Seniors next week,’ said Alessandro, who is coached by David Watson and Ryan McAllister.

‘It’s been a big learning curve for me this summer and making the Euro Juniors was always the target. It was so exciting to make the selection and the danger then is you drop out in qualifying.

‘Thankfully I made the final (alongside Stephen Mackenzie) but I didn’t perform with two no jumps and that is a frustration.

‘It’s good to take that CBP from James McLachlan but he still has the U20 Record at 7.63m. I’m getting close and I’d love to take that one over the next two competitions if I can.

‘The CBP might not last next year, right enough, because there are quite a few good athletes coming through.’ 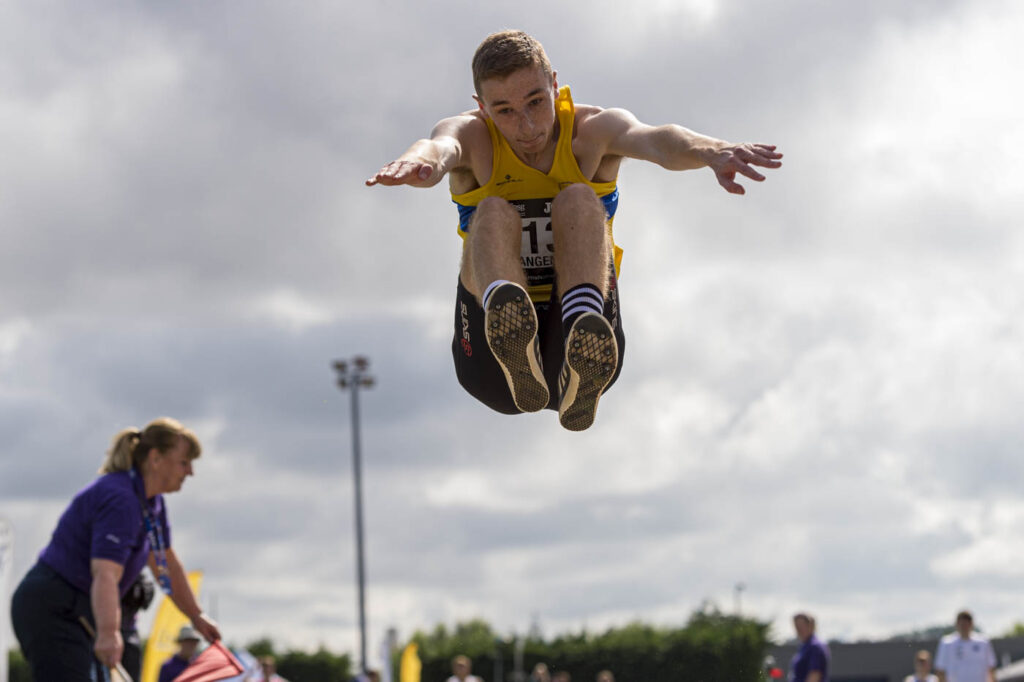 Alessandro Schenini flies through the air as he wins the U20 Long Jump title with CBP 7.53m (photo by Bobby Gavin)

Fotheringham, coached for his jumps by Colin Sinclair, is certainly one of them – pushing his PB on from 7.08m to take that U17 Record.

‘I couldn’t tell you yet whether I am a Combined Eventer or a jumper; I just enjoy a number of events. It was good today to push the long jump PB on by a good bit and even more so as I am just back after being out injured for the past few weeks.’

Sarah Calvert was another European U20 finalists in action and the Livingston AC athlete showed her class in the 800m final. After a first lap of 65 second plus she came home in around 62 to win in 2.07.86.

VP-Glasgow athlete Abbey Orr took the high jump title at U20 with a clearance of 1.67m.

Kirsty Costello (Kilbarchan AAC) won the U20 javelin with 41.12m and the men’s winner in that event was Andrew McFarlane (Shettleston) with 51.75m.  Sarah Barbour of Kilmarnock Harriers won the U20 Women’s Pole Vault with 3.25m. 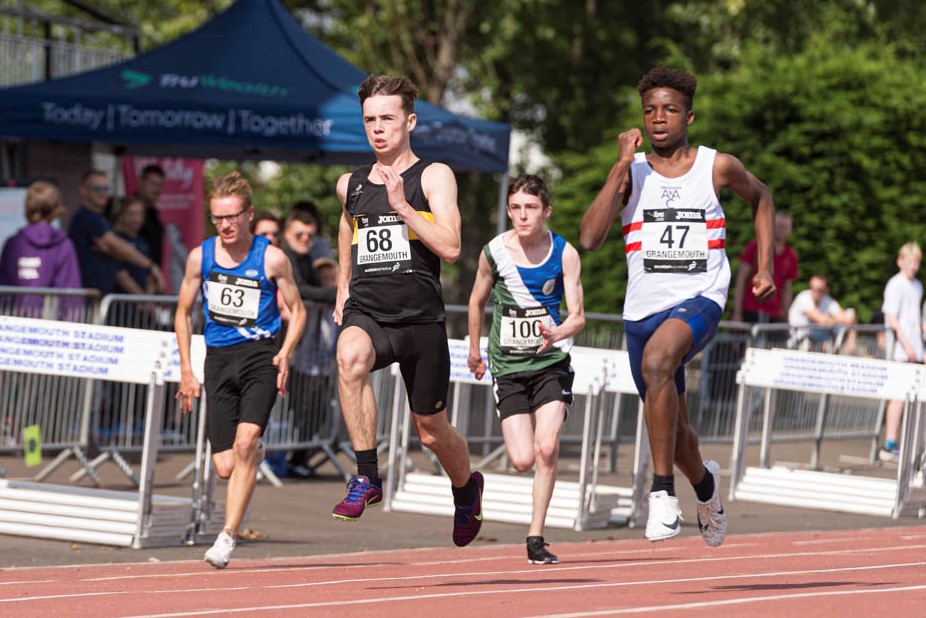 In the U15s age group, there was once again a big turnout with athletes from the length and breadth of Scotland joined by visitors from England and Ireland.

The highlight was a Scottish U15 Record (subject to ratification) in the shot put for VP-Glasgow athlete Meghan Porterfield. Meghan threw out to 13.29m before then taking discus silver.

There was a fine Championship Best Performance in the U15 Girls Long Jump by Molly Reville of Edinburgh AC with 5.51m.

Rebecca Grieve of Pitreavie AAC is making a name for herself and she chalked up another CBP in the U15 Girls 300m with a run of 40.45. It was a great race, in fact, with second-placed Silver Nwabuzor (Glasgow School of Sport) in 41.21 also inside the erstwhile CBP.

Come the U15 Boys 800m final and there was another CBP as Oscar Logan of Law and District claimed gold with a PB run of 2.00.10 to take a mark set three years ago by Harry Hall. Silver medallist Lewis Thomson of Perth Strathtay was also inside the original CBP with 2.00.92. 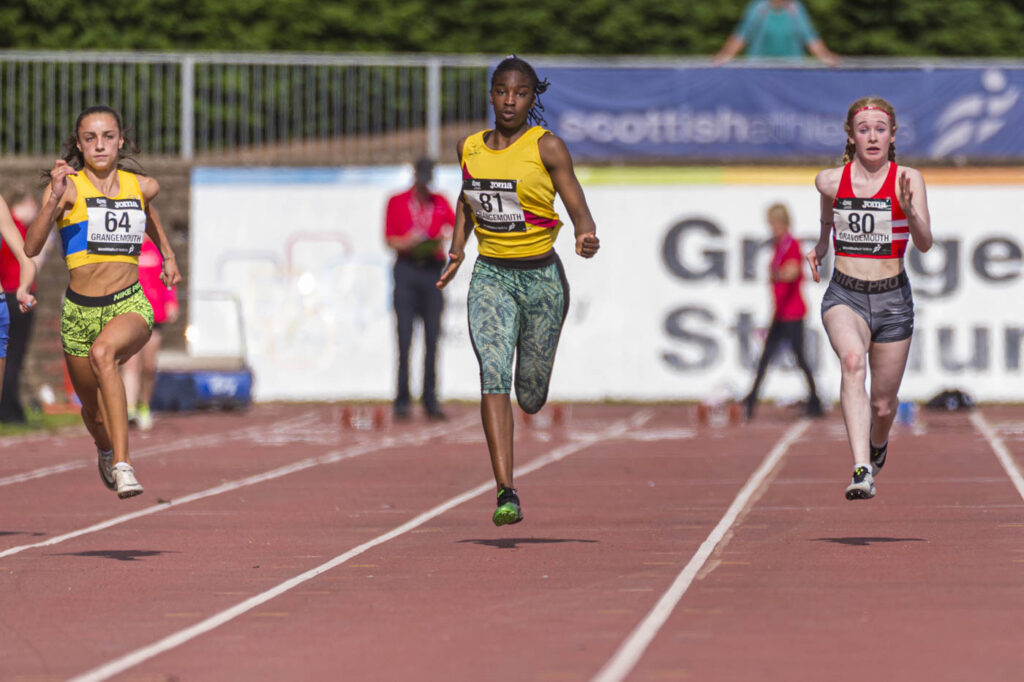 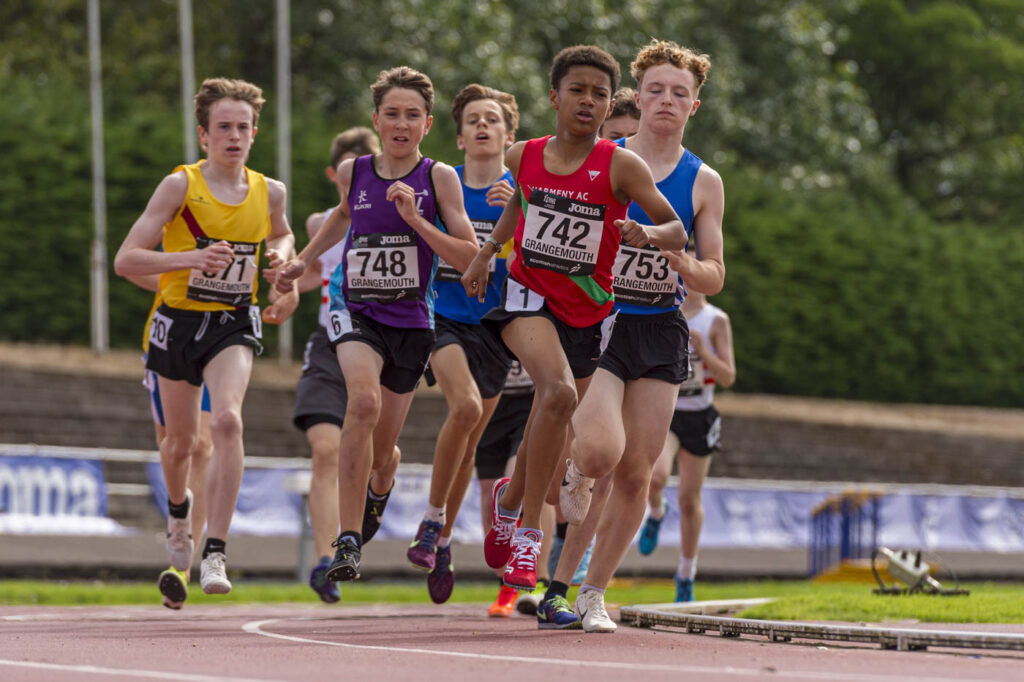 Action from one of the U15 middle distance races at Grangemouth