Henry Clarkson leaps to a CBP performance of 7.18m in the U20 long jump (photos by Bobby Gavin)

Our first FPSG Indoor Season concluded with the FPSG Age Group Champs at the Emirates Arena over the weekend – and safe to say it ended on a high!

With 840 names on the start-lists, the entry numbers were already hugely encouraging for the development of the sport in Scotland, with that being exactly 33.33 percent up on the 630 figure for these championships back in 2016.

After the participation, came the performances – with the U13 Champs in particular notable for a whole rash of age bracket Records being smashed by the best young athletes from the length and breadth of Scotand.

Just as positive is the commitment from many athletes and their coaches, as well as clubs, to competition and we noticed on social media reports of one or two clubs confirming their first-ever National Championship medals.

All the Results are online on the Live Results section. 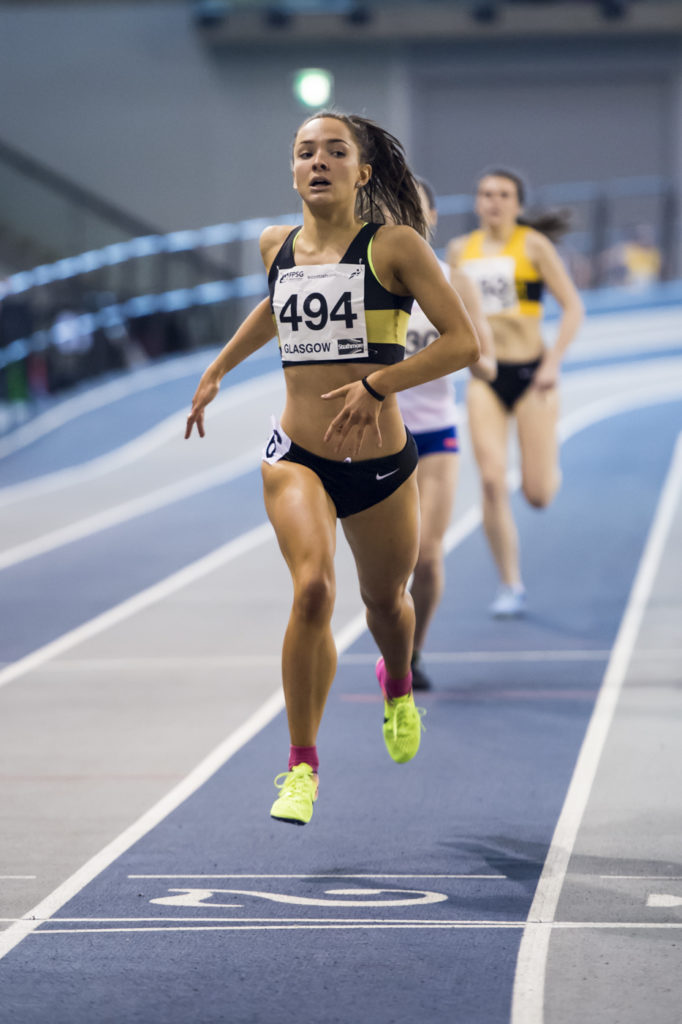 Olivia Vareille of Falkirk Vics on her way to 800m CBP

Sunday’s U20 action saw the main highlight being a Scottish U17 Record achieved by Edinburgh AC jumper, Ellie O’Hara.

Ellie was competing up an age group and took Triple Jump U20 gold with a leap of 12.00m and (subject to ratification) that will be confirmed in due course as a Scottish U17 Record. Ellie also won bronze in the U20 long jump.

Lasswade’s Clarkson, who is now studying in Loughborough, retained his U20 long jump title with 7.18m on a day when four of the top five in the UK in the age group rankings were in competition. Joel McFarlane took the silver and Alessandro Schenini the bronze.

‘I am delighted to win the gold and defend the title I won here last year – and the Championship Best is a bonus,’ said Henry. ‘I jumped 7.06 last year so have pushed it on a bit more and it was an indoor PB for me. The competition in Scotland is so strong at the moment in U20 long jump it is definitely helping us all to better performances.

‘I am down at Loughborough now and really enjoying it, there is a strong training group and coaching input as well the help I have from Linda Nicholson.’

Falkirk Victoria’s Vareille won an exciting 800m contest as she clocked 2.09.49 to take a CBP held by Kelsey Stewart. Just behind Olivia, there were PB for Aberdeen AAC’s Rebecca Eggeling with 2.10.62 and Kilbarchan AAC’s Kerry McAngus with 2.11.47. The men’s 800m final saw an Edinburgh AC 1-2-3 as Sam Brown won in 1.54.47 from Joe Ewing and Paul Ireland. 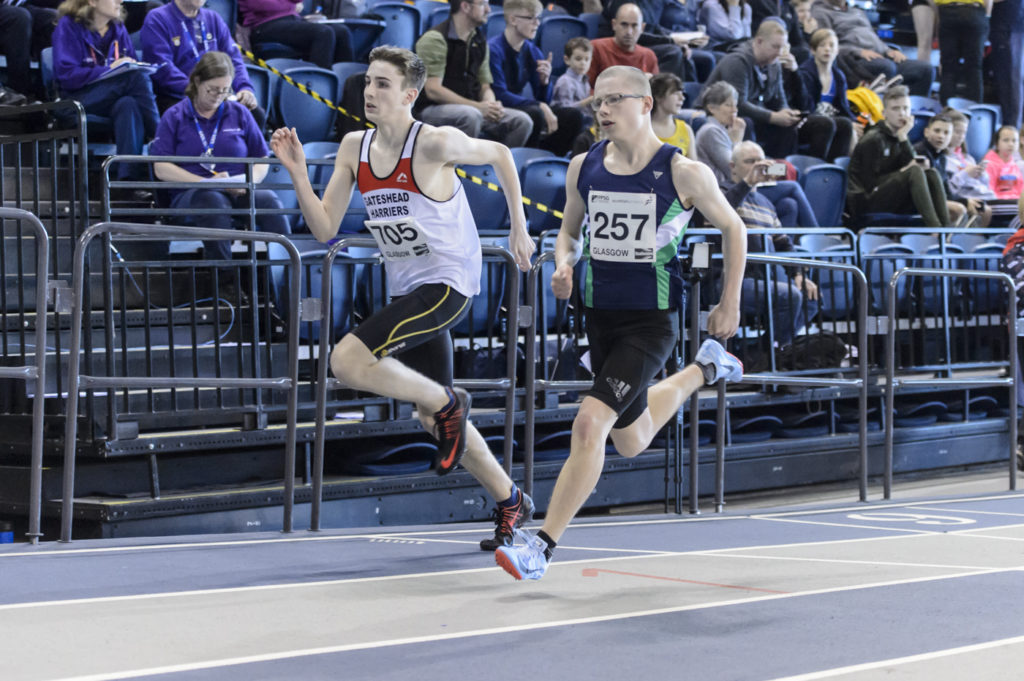 The main highlight of the FPSG U15 Champs came in the Boys 300m final as Whitemoss AAC athlete, Dean Springett, clocked 38.38 to win gold with a Scottish Record and CBP performance.

That was two hundredths quicker than the previous U15 Scottish Record set by Max Leslie two years ago. Dean also took a silver in the 60m.

North Ayrshire AC athlete Aidan Brindley, whose brother Scott was setting records at the England Athletics CE Champs, made it a great weekend for that family and his club by taking pole vault gold at the Emirates Arena as well as a bronze in the long jump. 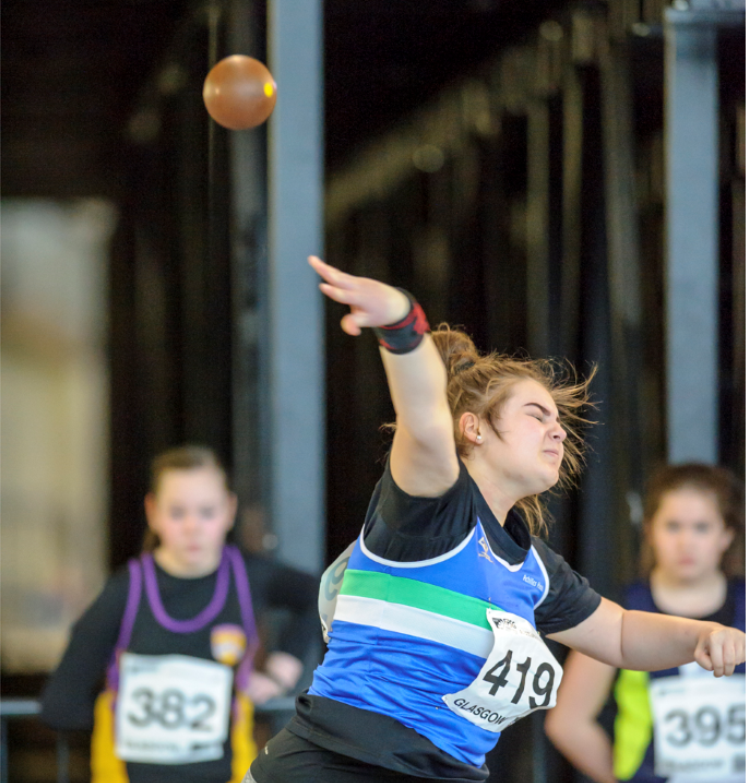 There were some top performances in an excellent U13s event on Saturday – with Scottish youngsters joined by visiting athletes from England and Ireland.

The there were a number of stand-out medals were achieved by young Scottish athletes including those performances by thrower Meghan Porterfield in the shot and Lachlan Buchanan in the 800m.

Meghan, the VP-Glasgow athlete whose mum Mhairi made a Scotland international return lad year, claimed both a CBP and (subject to ratification) a Scottish U13 indoor record in the shot with 12.04. Alison Grey, now on the scottishathletics coach education staff, had held the CBP for a number of years.

Inverness Harriers athlete Lachlan has a good cross country season behind him and delivered a superb 2.15.33 time to win 800m gold. That was a CBP, too, and strips more than four seconds off the Scottish U13 Indoor record.

Following that up were Scottish U13 Records (subject to ratification) for Harmeny’s Finlay Ross in the 1500m with 4.43.23 and for Ayr Seaforth’s Erin Ramsay in the 200m with 26.83. Erin had broken the previous record in the heats, too.

Similarly, there was an U13 Record for Jenna Hilditch of VP-Glasgow in the 60m Hurdles with a run of 9.65.

And Dunfermline’s Mya McMahon equalled a Scottish Record performance with 1.56m in the high jump. 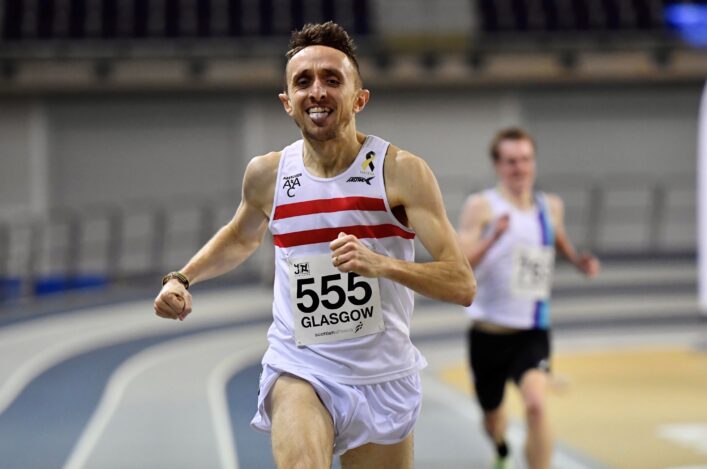