Cambuslang land a treble at Livingston 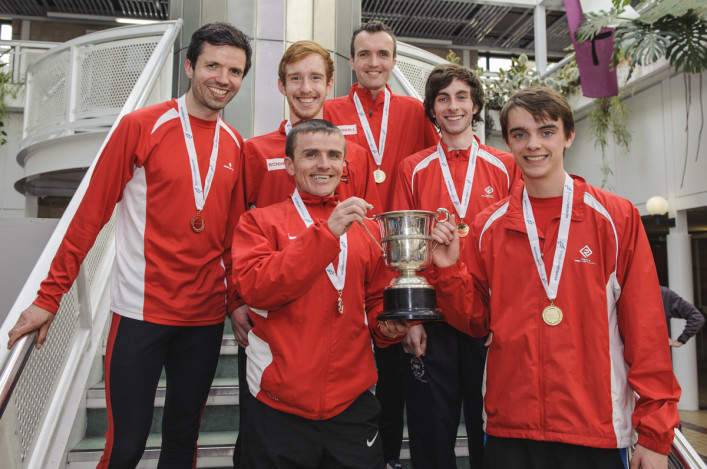 Ronhill Cambuslang Harriers are a club who pride themselves in their record of achievement in cross country and road running – but rarely in their 68-year history have they savoured an afternoon quite like Sunday at Livingston.

No fewer than 16 of their athletes went home from the National Road Relays clutching gold team medals as the Glasgow outfit enjoyed a ‘#cleansweep’ on the men’s side – winning the Senior race for the first time in nine years as well retaining their Masters and V50 titles.

And they were as quick off the mark on social media as they were on the West Lothian course with the tweet: ‘There will be dancing in the streets of Ronhill’ a variation on an old line originally coined with reference to Raith Rovers football club.

Central AC took the Women’s race for the second time in three years as they re-asserted themselves thanks to the return to fitness of a strong quartet – all of whom have had injury or illness over the past 12 months or so. Edinburgh AC had to settle for silver there with Aberdeen AAC thrilled to medal at this event for the first time in 25 years.

The outstanding individual performance of the day came from Edinburgh AC’s Maddie Murray. The GB international recorded a superb course record for the Livingston short leg with her time of 16.42 emphatically eclipsing a run by Lynne Macdougall from 2001 at 17.01. Aberdeen’s Nicola Gauld was the fastest long leg at 33.36.

Gala Harriers took the Women’s Masters golds once again and there was joy for Motherwell AC – winners of the V50 Women’s race. 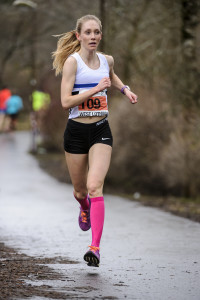 But in many ways the day belonged to Cambuslang as they saw off the challenge of Central AC, silver medallists as they were 12 months ago to Kilbarchan AAC.

Inverclyde AC took bronze medals with Andy Douglas having a superb last leg, the best of the day for the 5.8 mile route at 28.41. Inverclyde’s Jonny Glen was the fastest short leg at 15.30.

‘It is a very special day for the club and a unique achievement to have 18 men across three teams at Seniors, Masters and V50s picking up gold medals, said Dave Cooney, Ronhill Cambuslang president.

‘We’re naturally delighted for all at the club – I think this proves we have significant depth. There are some key leaders at the club, too, and I want to thank all the coaches involved in this success.

‘In terms of the Seniors, we felt we had a well-balanced team. There are never any guarantees in athletics in terms of podium places; our Masters and V50s have won this title the past few years but you still have to do it all again on the day.

‘They stepped up to the plate once again and, in the main race, it was a great performance by all the boys. Kyle McLellan was on the last leg and he is a junior doctor in Dundee – I believe he’s worked a 63-hour week prior to the race! In fact, he has not raced since the inter-Counties at the start of January.’

There was sadness at Ronhill Cambuslang over the weekend, too, with sympathies extended to the family and friends of former member, Jim Fitzpatrick.

‘I’d like to dedicate our success at Livingston to the memory of a member of our who died on Saturday,’ added Dave.  ‘Jim Fitzpatrick was with us from the mid-1960s to the early 1980s and he was one of the sponsors of our Down By The River 10K races.’

Central and Inverclyde ate into the lead that Ryan Thomson had handed over to McLellan – but not enough to change the medal order.

‘I knew they were closing, and could see Dale Colley at times with Andy Douglas running very strongly too, but thankfully I just had enough to hold them off,’ said Kyle, with the other winning team members being Iain Reid, Stuart Gibson, Craig Jardine and Robert Gilroy.

‘I’ve had a lot of work commitments and it means I’ve missed a few races so my preparation wasn’t ideal but it was a great team performance for us to win it.’

Cambuslang took the Masters race for the sixth year in a row from Kirkintilloch Olympians and Bellahouston Road Runners and their V50 men’s team just held off Shettleston for a fourth successive title in that category. 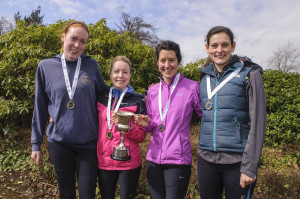 Central AC’s winning team was Morag MacLarty, Fiona Thompson, Lyndsay Morrison and Jenn Wetton. They saw off the challenge of an Edinburgh AC team that included Maddie Murray plus Rachael and Laura Dunn.

‘I am pretty certain that if the first time the four of us have run together as a team,’ said Wetton.

‘We’ve all been in teams here over the years but in different selections. Earlier in the week we didn’t really have any expectation. We though maybe bronze medals would be a decent achievement.

‘So we have surprised ourselves a wee bit really. We could have run better than we did, if I am honest, but we’ve all been out for varying lengths of time over the last year or more. Morag is only just back in training after five months out.

‘There was a period, I think last November, when we virtyually didn’t have a Senior Women’s team at the East Leauge and that’s not like Central.

‘So we are delighted to be back on top of the podium and win this one again. We were champions in 2014 but Lothian RC won it last year – with Edinburgh having beaten us narrowly in 2013.

Gala Harriers Masters are dominant often at Livingston and this year was no exception. The team of Fiona Dalgleish, Kate Jenkins, Fiona Shepherd and Jennifer Forbes took the golds for the fourth year in a row with Edinburgh AC landing silvers and Bellahouston Harriers in third.

The V50 golds were won by Motherwell AC. 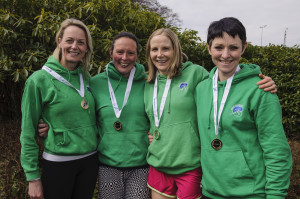 M50 ‘shoot-0ut’ between Cambuslang and Shettleston